I have been an avid Imperial Guard collector for many years, and over time have put together several vehicles to accompany the Guardsmen in their various futile enterprises on the gaming table. The vehicles are dark blue, so as to match any of the particular iterations of Imperial Guardsmen of my collection. I built or acquired most of the vehicles between six and eight years ago, before I knew how to deal with "silvering" of decals, or did much to "weather" the look. They looked OK, but were not that great.

Inspired the excellent weathering Dallas has done on his vehicles of late, I have decided to give the Imperial Guard vehicle fleet a painting and decal upgrade of sorts over the past few weeks.

Here are two "before" pictures - one of a Leman Russ Vanquisher, and the other of a bog standard Leman Russ (acquired assembled and unpainted from Galaxy Comic's trading shelf for like five bucks! Those were the days...) 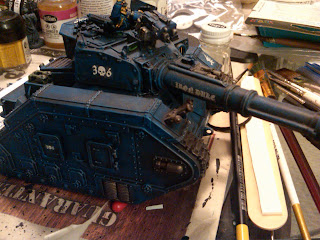 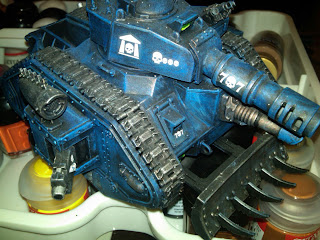 Both vehicles show my fondness for too many decals, my excessive use of the rather limited decals you get with 40k Guard kits (heavy on skulls etc), lack of understanding of the "silvering" affect, no rust splotches, not much weathering etc. Plus the regular Leman Russ still has small flicks of insulation from the roof incident.

I painted the decals over, marked up the tanks with Dallas' rust splotch technique, and then applied liberal layers of dry-brushed yellows and browns to the tracks and hulls to make the vehicles look like they had actually been somewhere and seen some action.

For replacement decals, I used the handy WW2 German tactical numeral sheets available from "Company B" (highly recommended) and some spare decals from Battlefront's Afrika Korps decal set (much harder to work with, for some reason, but at least readily available). I much prefer the look of these tactical numbers to the italics and skulls of before. Plus I was able to eliminate the silvering on the second pass.

Here are the after photos: 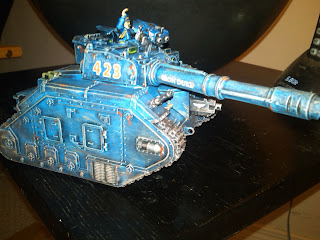 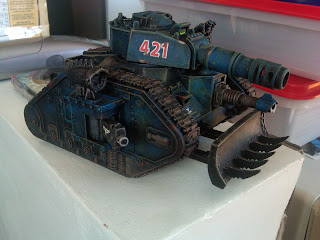 Who knew the "Iron Duke" name was so popular that it would be on multiple GW decal sheets? I figured the Vanquisher was a unique enough tank that it still rated it's own nickname.

All of my Imperial Guard tanks are getting this treatment. The Chimeras are getting new, SM Predator-style turrets to boot - I'll do a separate post on that later.
Posted by Greg B at 10:59 AM

Those look awesome! Getting ready for the Apocalypse game?

Oh yeah - need some updated stuff to accompany the new super-heavy on the table.

The tactical markings also provide a neat cohesion for your tank forces.