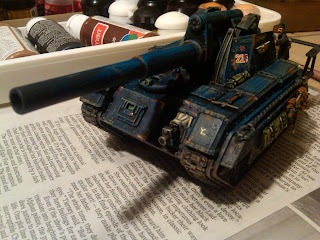 While I went through the project to upgrade/re-decal/weather my 40k Imperial Guard tanks, I found a little gem in the pending pile - a Basilisk, complete with the an alternate gun shield from Forgeworld (Vannheim pattern or something). I think I first got that thing like six years ago...another example of my lack of focus.

Anyway, the thing had been assembled, and was primed. At one point, it was going to join the Gün Schwarm lineup, but they have plenty of tanks and heavy guns for now. So last night it joined the Imperial Guard armoured column instead! Here are some pictures: 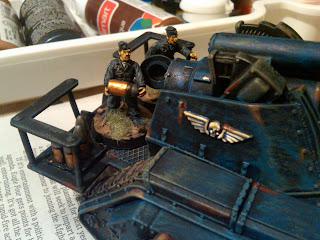 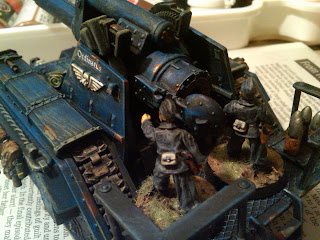 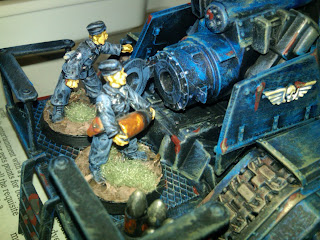 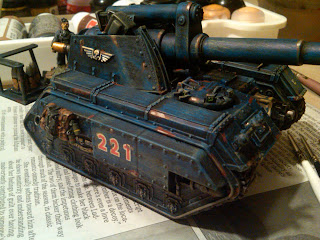 The artillery crew are old figures that I had painted about two years ago...their colours don't match the rest of the collection (maybe I was thinking artillery crews would have a different colour uniform? who knows?) but I'm glad they have a gun to work now.

I like this version of the Basilisk as it brings to mind the various improvised tank destroyers seen in WW2. To keep the flavour, I put the gun at near-zero elevation - I imagine the Guardsmen bringing this sucker forward to direct-fire right at enemy forces in buildings/bunkers/community centres etc.

As far as I know, rules-wise this thing simply counts as a Basilisk - I don't think there were special rules for this variant of the gun shield. But it's good that the Guardsmen will have some artillery fire to back them up.

One new vehicle left on this project - stay tuned for updates...
Posted by Greg B at 9:03 AM

That is a great looking bit of kit! I like the open breach-block that sorta looks like a kiln. Its kinda steam-punkesque.