A few days ago I posted a few photos of the Bolt Action Ruined Hamlet that I'd assembled. Now it's been painted (and used in a game even!) so I thought I'd post some photos of the completed pieces and a bit of a description of how they got there. WW2 French infantry models from Crusader Miniatures will help to illustrate scale.

After assembling the pieces and filling gaps with greenstuff, the models were based on 0.060" plasticard. I bought a package of the stuff from a local hobby shop, and was shocked at the price ($20 for two sheets). Has the price of oil skyrocketed when I wasn't looking???

The Ruined Hamlet kit included a couple of extra rubble piles to place against the walls or in the corners. I used these to fill empty spaces on the bases, by sticking them together and filling the gaps as necessary.

Texture for the bases was provided with copious quantities of texture gel medium. I left some smooth spots in the middle of the buildings for painting in floors later.

The whole thing was sprayed with Krylon flat black paint.

Colour was built up with an allover heavy drybrush of Citadel Mechanicus Standard Grey, followed with Fortress Grey. The plaster bits and lintel stones were drybrushed with Citadel Dheneb Stone.

The wooden roof beams and floors were basecoated with Citadel Scorched Brown and highlighted with Calthan Brown. On the main level floors I painted striped of Calthan over the Scorched Brown to represent wooden floorboards. The wood was drybrushed grey and black scorch marks applied with a large stippling brush. On the floors I went over the scorch marks with stippled Mechanicus Standard Grey.

Some black scorch marks applied to the walls and voila, one Ruined Hamlet reporting for duty!
Posted by Dallas at 9:35 AM 8 comments:

Following on Dallas and Mike's cool game from last week, I wanted to belatedly post some pictures of a game Mike F and I played four weeks ago, pitting the Nova Respublik and their new DOE gunships against the sinister Control Battalion.  There are a bunch of pictures in this post, validating Dallas' recent assessment of my blog "style".

For rules we used Bolt Action (Brian - at least we are not using Lord of the Rings :).  The scenario involved a Nova Respublik counter-attack against a Federal Army spearhead led by a pair of Siler tanks.  I wasn't that specific other than the Nova Respublik wanted to stop/slow/knockout the Silers.  Really the game was an excuse to roll out the DOE gunships and Silers!
Mike F took the Nova Respublik side, and I played the Control Battalion.  Here are a bunch of pictures of the game. Short game summary - lots of stuff blew up, and while Mike generally failed his rolls to even have his air support arrive (unlike Dallas, who failed his air support rolls in our game the following week to decimate his own attack), when the DOEs did show up, it was pretty devastating.
The Silers were tough - meeting out a lot of punishment - also missing a lot.  But they put out some serious abuse on the Nova Respublik armoured vehicles.  However, they were stopped, so the game ranks as a win for Mike - although one with a pretty steep cost in toasted NR vehicles and troops.

It was fun to get the DOEs out on the table for a first game! Thanks for Mike F for coming out for the game.
Posted by Greg B at 6:48 PM 6 comments:

After a grumble about running out of photo space on the site, I tried to use Flickr. I loathe the various free photo-sharing sites, and this renewed attempt to employ one lasted about fifteen minutes. So I am now bent over by Google. It was just a matter of time anyway!  So with that out of the way, finally a new post!

I had not done much of this since Curt C's Analogue Hobbies Painting Challenge wrapped up earlier this year, but the WW2 bug has got me again. I have a pile of 15mm stuff waiting for attention, and I am starting to move through it. Just a few pics of some recent worktable progress on more 15mm WW2 material - German and Russian stuff from the Eastern Front.

For the Germans, some Mark IV-H panzers.  One of these had been painted some time ago - and had already seen action on the gaming table (too bad it could not help its larger friends during that game, but anyway)- but the other two are new models.  One is from Battlefront, and the other is a test model from Plastic Soldier Company.

The PSC Mark IV panzer models are lovely, whereas the Battlefront models - which look nice too - are pure hell to put together.  On the other hand, the Battlefront Panzers are available with the Zimmerit finish, which may matter to some folks. I highly recommend the PSC Panzers, so long as you don't want (or don't care about) Zimmerit on the tanks.

I started basing my 15mm vehicles while working on my Golan Heights Project.  I liked the overall effect, so I have started doing this for my WW2 15mm stuff as well.  So far I'm pleased with the results, although the grass was maybe a little lighter than I had hoped.

And now the infantry...

Russians are up first. You pretty much always need a lot of Russian troops for almost any Eastern Front scenario, so this is the first step in tackling a LARGE pile of stuff. These are Battlefront castings - but I have some Peter Pig ones coming up too. And I am doing a few on individual bases, for skirmish gaming purposes.  More on that in a later post... 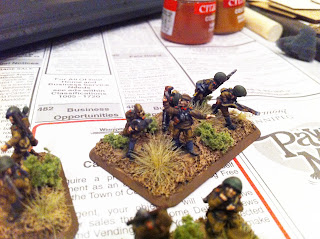 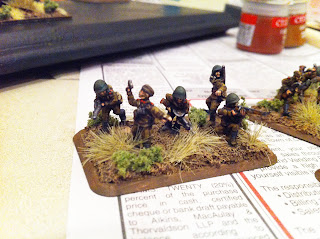 It will be a while before enough stuff is accumulated to play a game, but Dallas mentioned the other day that the 70th anniversary of Kursk is next year.  I think that will serve as a nice motivation to get through this pile and fill a table with flaming tanks next year...
Posted by Greg B at 4:06 PM 10 comments:

So, it has happened. Both Greg and I were working on blog posts today and we got the same message when trying to upload photos:

Whoops! You're out of space. You are currently using 100% of your 1 GB quota for photos.

So now "Blogger" (i.e. Google) has us over a barrel. Start paying for extra storage space, or revert to a text-only blog. Since we are both pic-whores (sorry to speak for you buddy but you know it's true) I guess we all know what's gonna happen...

I know, I know, Blogger is free and I shouldn't complain, but I'm a real...

and it annoys me greatly to have to pay for something that used to be free.

Email ThisBlogThis!Share to TwitterShare to FacebookShare to Pinterest
Labels: bent over by Google 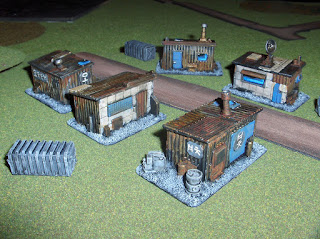 A few weeks ago, I saw a post on TMP that linked to a blog post promoting a model-railroad "rust in a bottle" paint product that looked very slick. Always being eager to snap up new products that enable my laziness as a painter, I found a source for the magic elixir in the UK and ordered a bottle (not cheap). After 10 days or so it arrived: 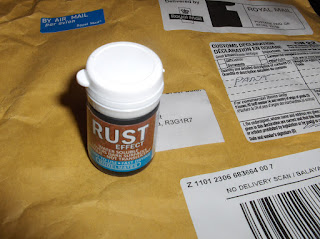 I had several half-finished 15mm corrugated iron shacks laying around that I had assembled and basecoated with Boltgun Metal, but (as you do) had lost motivation to finish. Being that I had wanted to run a 15mm sci-fi game soon, I recognized the szygy-like convergence of factors... half-finished terrain plus easy rust paint product plus running a game to use the terrain equals motivation to finish the project! So off I went... 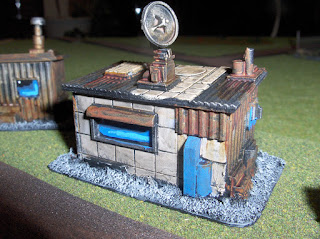 The Rust Effect stuff is actually opaque, so after basecoating with Boltgun Metal, Dheneb Stone, and Astronomican Standard Grey, and layering Ultramarines Blue and Shadow Grey, I applied a wash of GW Gryphonne Sepia mixed with Devlan Mud and let it dry. 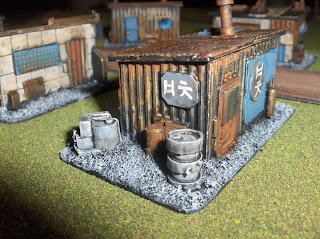 Then the Rust Effect was liberally applied to the metal parts! 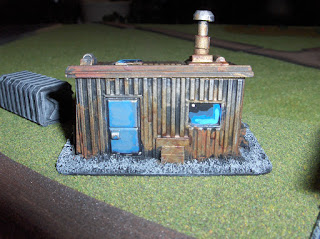 After that I painted the windows and solar panels in the usual "gem" style. 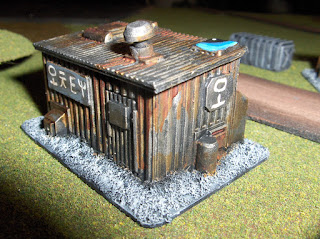 I added some faux-Korean characters for that "indeterminate future space language you'd find in a makeshift shantytown" look. 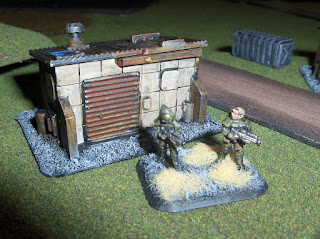 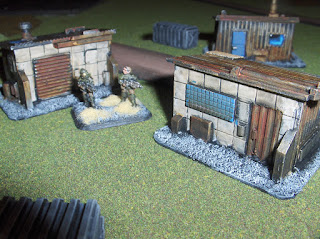 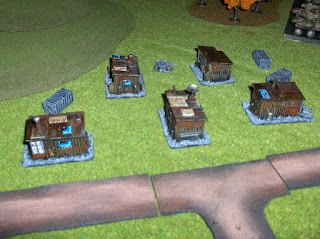 I'm pretty happy with how this project turned out. I think that the Rust Effect product will be quite useful when painting heavily weathered and/or Nurgleized stuff. It certainly worked a treat on these shacks. Easy to use and great looking results - how can you put a price on that??? 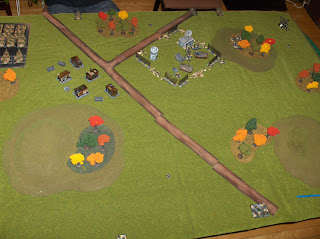 On Thursday, Conscript Mike F. brought his 15mm Sahadeen Rebels over for a game of Future War Commander. I dusted off the Earth Force to oppress them in a rematch of a game we played last year. 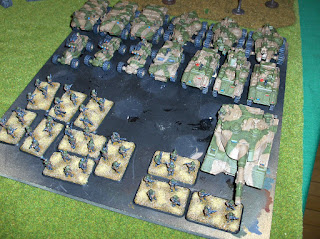 2500 points of Rebels without a cause. Lots of vehicles with big guns, but fragile. Oh, except for the Siler. That's anything but fragile ;-) 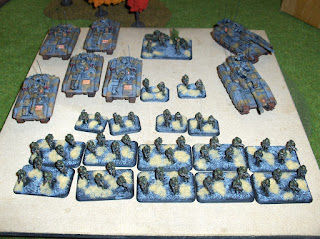 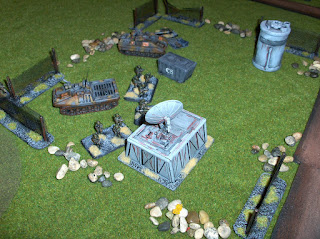 I set out a scenario where a few stands of the Earth Force contingent were holding a VTOL airstrip and guarding a valuable cargo pod. The Rebels enter via mobile deployment on the north edge of the table, and the rest of the EF from the south. The objective is for the EF to hold the cargo pod for 12 turns, when the VTOL carrier will arrive to pick it up. 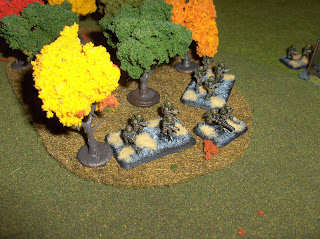 I deployed a few stands in a wood overlooking the airstrip. 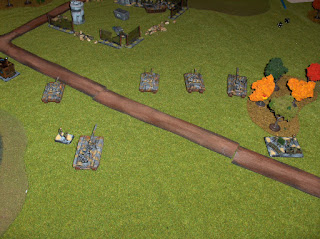 Mike took the first turn and tried to motivate his Rebels on to the table, but mostly failed his Command rolls. The Siler came on though, rolling straight at the woods at the extreme top left of this photo. I rolled the armoured infantry towards the airstrip ASAP. 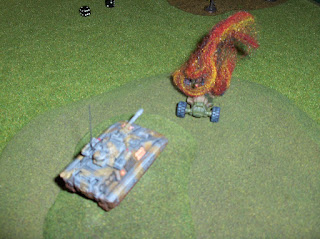 An APC caught Mike's recce buggy making a sweep around my lines. 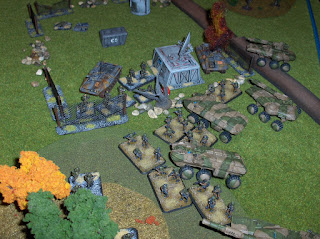 The action was joined fast and furious around the airstrip. Mike's rebel APCs and infantry rolled forward in a wave, blowing up my APC and killing some infantry. Siler can be seen at bottom left. 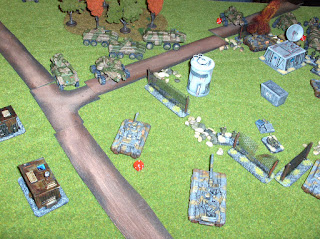 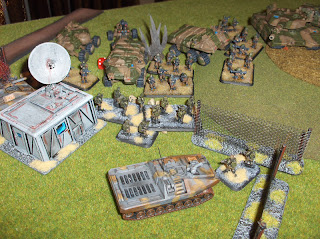 Meanwhile, desperate fighting around the airstrip as the HQ stand (centre right) issues orders to his depleted group... 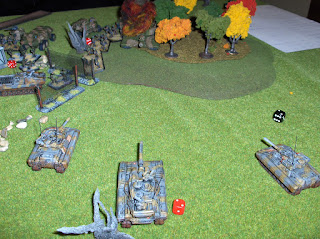 My other armoured battlegroup rolled up and concentrated fire at the Siler, knocking it out! Mike's face got pretty long when that happened... 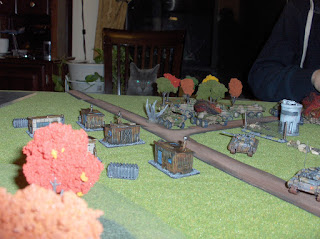 Gilles was feeling pretty sociable. He sat in that chair for most of the night. 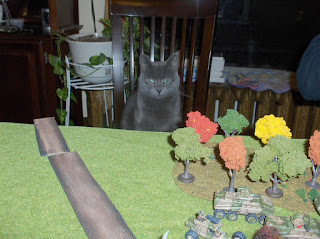 I guess he was interested to see how the tanks he painted performed on the battlefield! 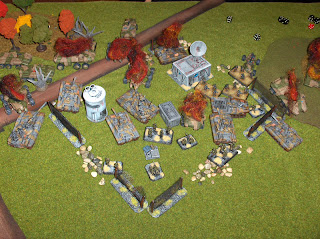 A sight to warm the cockles of any Future-Assad's heart. Rebel vehicles burning fiercely. Once the Siler was destroyed the fight seemed to go out of the Rebels somehow... when my tanks were able to get into their optimal range things started to blow up real good. On the following turn, the Rebels failed their army morale check and faded back out into the wilderness, leaving the airstrip and cargo pod in the hands of the EF. Vindication for last year's crushing defeat?? 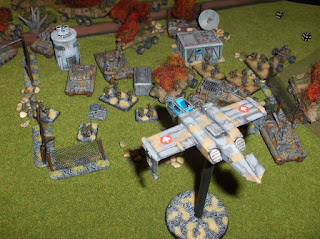 Propaganda photo-op as the VTOL carrier swoops in to retrieve the cargo pod. Great game, and always cool to wheel out the 15mm SF stuff. I'd actually used the game as a spur to finish a small terrain project - the rusty makeshift shacks seen in some of the pics above. Watch for a new post shortly with detail shots and a review of an amazing new weathering product! (Oh and thanks to Conscripts Mike F. and Brian for coming out for the game, and to Mike for bringing his very cool toys!)