Letter from a Plague Marine Mum said that they just installed high-speed at your seniors' complex on Scabiethrax VII. That's great! I thought you might like an email from me with some news, so I'm writing to you about the battle I was just in!

I've been a Plague Marine for awhile now, and it's pretty great, aside from having a runny nose all the time, and the weeping open sores. But you get used to that. It's kind of awesome to not feel pain anymore, either. You know how much it hurts when you get a papercut, or stub your toe? Well I don't. We Plague Marines can't feel a thing. In fact, last week when we were training, Sergeant Oozeblister got run over by our squad Rhino by accident. He wasn't hurt at all! He was just mad that his plasma pistol got kind of messed up and there wasn't time to fix it before the big battle. But that's OK, it turned out he didn't need it anyway.

So like I said, we were in a big battle. It was on Toxo IV, as usual, and we had to fight Space Marines. I thought I might know some of the guys we had to fight against, being that I used to be a Space Marine too, but I didn't. I had my iPhone with me so I took some pictures during the battle, I thought you might like them.

When we got to the battle there was hardly any Space Marines there! Just a few scouts in a crater and some guys on bikes quite a way away. So I gave my iPhone to my buddy in the other squad and he took some pictures of our squad. We had to walk to the battle because our Rhino was still busted from running over Sarge, but it was OK because we got to walk behind the two Chaos Spawn we have in our army. Well, it was good because we had cover, but it was bad too, because of what Chaos Spawn leave behind... especially if we have Mexican food the night before a battle. But the cook says that just makes us more special to Father Nurgle, so that's cool I guess. 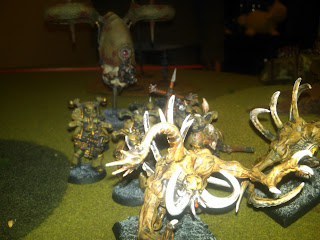 Here we are at the start of the battle. You can see the Blight Drone behind us. He likes to call himself the "Bile Cyst of Nurgle" but we call him the "bicyclist" as a joke! He doesn't like that - you should see him get all swollen up and hissy. It's a riot. 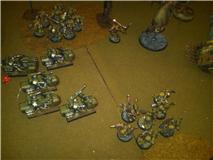 Here's those Space Marines on the bikes. They put a lot of miles on in this battle - drive up, get shot at, drive really far away, come back, get shot at... right here is just before they all drove away again... then they all got killed. 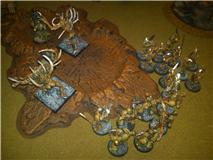 It was so awesome being the icon bearer because I got to summon the Plaguebearers! They are really gross, even by Plague Marine standards. Also in this shot you can see the last scout about to get eaten by Spawn. 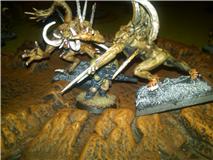 "Down the hatch!" They regurgitated the Scout later and I think he's going to join our squad! His name is Phil, he's actually a really nice guy. 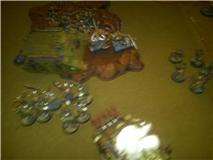 The Plaguebearers are fighting some Space Marines in this picture. We're in the crater behind the Spawn still. Sorry it's out of focus but this was when the Land Raider was coming and my buddy dropped my iPhone, I think.

After awhile Typhus came along with some Terminators! They were totally awesome. Typhus was really on his game, he blew up a Rhino by himself and killed a whole bunch of Space Marine terminators. He probably would've blown up their Land Raider too if he'd had time, but he had to leave right away again. I guess he had something really important to do, he gets teleported everywhere, must be nicer than having to walk around behind a bunch of Chaos Spawn! But anyway, he was really cool and his Wind of Chaos smells really, really bad. And he has a lot of flies around him all the time. A LOT of flies.

I know you don't see many Space Marines in these pictures but I can tell you there were quite a few in the battle, it's just that a lot of them got there late. Like I said, there was even a Land Raider with a bunch of terminators and a chaplain, but they were kinda far away and we weren't in a big hurry to get up close and personal with them, if you know what I mean! But we ended up right near them and we shot at them a lot with our bolters but nothing much happened. Just when we thought we might be in BIG trouble Typhus and the terminator squad came along and totally owned them, it was so cool!

Anyway, I hope you enjoyed the photos. I have to go, Sergeant Oozeblister is telling me my armour isn't rusty enough so I have to go put some salt water on it.

Love from your nephew,

So, Conscript Mike F. brought over his Space Marines for a battle against my tuned-up Nurgle Chaos Space Marine army. It was a really fun game (for the disciples of Nurgle) but I think a frustrating one for Mike as his Reserve dice did not cooperate with his plan... having a Land Raider full of Terminators and a tooled-up Chaplain is great, but not if they don't arrive until turn 4... The "null deployment" tactic can work great if you have infiltrators and a way to increase the chance the reserves will all arrive at once, but for non-Eldar it's a bit of a crapshoot. Anyhow, an enjoyable evening's entertainment and Mike, your army looks great!
Posted by Dallas at 4:48 PM

I'm glad you liked them, but I might take my new patrol boots to them. They have a real thick sole that works great on armour 14. I may also ask if I can take them to the range to sight in my glock when I get it.

Don't be so hard on your Marines, Mike. With a final score of 6 to 5, it was a near run thing. If you had a bit more luck in rolling for your reserves, or not had such a congested traffic jam of bogged down vehicles, your boys would have taken down Nurgle's chosen ones.

Loved the post, and it was a fun game (for us).

Don't worry Mike - I've nearly melted/destroyed my guardsmen so many times I have lost count - and now I have more than I can count. So just go set more Marines instead...

RE: Null Deployment:
The Eldar tactic of reserves denial indeed relies on the presence of one or more Autarchs to buff the Reserves roll.

That being said, I've been playing around with starting on the table, actually deploying a "castle" of units - using terrain, movement and vehicles to grant everything cover saves. This allows more firepower to bear over the course of the game, especially important when the other side is limited by the scenario in its deployment options.

This is a pretty good story. I would like t suggest that medals (or some kind of honor) be awarded at the end of 2011, based on "popular conscript vote" for some of the following (list to be finalized):
- Most Original Battle Report
- Most Outstanding Defeat
- Most Insane Project
- Most Shocking Picture
- Etc.