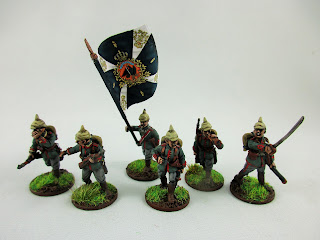 A recent Great War game set in 1914 triggered me to dig out and paint some figures I'd had in the pipeline for some time. First up was this lot of early-war German command figures sculpted by the talented Paul Hicks for the Mutton Chop Miniatures imprint. 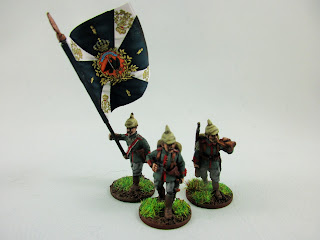 As anyone who's familiar with Paul's work well knows, his models are full of character and are anatomically and historically accurate to boot! Above we have an officer with Fahnentraeger and musician, from the regimental HQ. 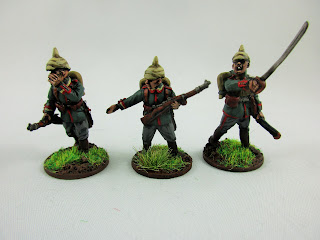 Above, a couple of NCOs bellowing orders and a sabre-waving officer. I like how the German officers in this period carried packs and wore helmets just like the men under their command. 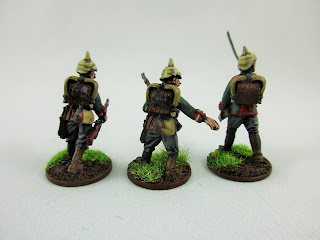 Rear view of the group. 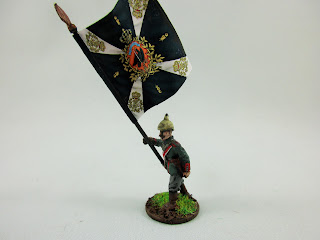 Another view of that wonderful regimental standard. Thanks to Conscript Greg for coming through with that for me at short notice! 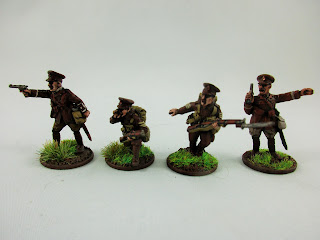 Paul also sculpted lots of nice early-war British for the Mutton Chop range. Pictured above are two Majors with a couple of guys who do the real heavy lifting - their Sergeants. 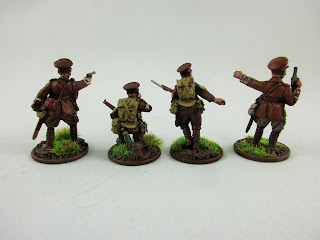 I used Citadel paints on these - uniforms are Mournfang Brown with Doombull Brown used for the leather gear, and Zandri Dust for the webbing, all washed with Agrax Earthshade of course. 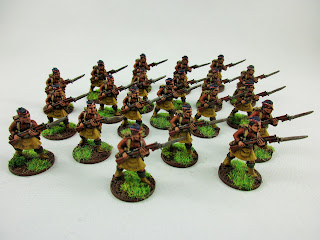 Now onto a whole pile of models that had been hanging about the painting desk for ages - a small platoon of Foundry Highlanders. 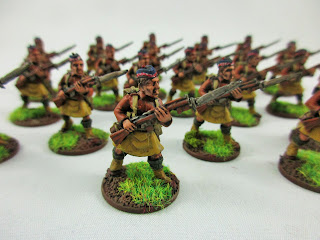 Of course, the beauty of these models is that they can stand in for late-war gaming in a pinch, as well as serving in 1914-15. Of course in 1916 and later they should be wearing shrapnel helmets, but I like to imagine that Scottish bloody-mindedness might prevail and cause them to retain their Glengarries even at that time. I have a few command figures from Great War Miniatures on the way to make up the platoon HQ (or company HQ in a Warhammer: Great War game). 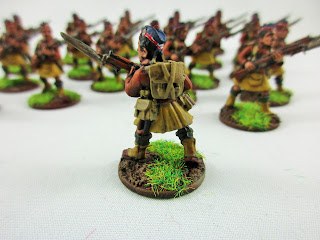 Paint is very similar to the Mutton Chop lads, but substituting Skrag Brown as the main uniform colour just for variety. The P08 webbing is Zandri Dust, with the kilt cover and spats being done in Zamesi Desert.

So there you have 'em - another long-outstanding project cleared off the desk and way made for something else. I think next up will probably be getting a couple more motorbikes painted for the Gaslands game at Prairiecon coming up in about three weeks' time - unless the Highlander command models get here first of course!
Posted by Dallas at 4:02 PM 6 comments:

More "small" progress from the painting table, a continued theme from recent posts - 10mm Franco-Prussian War figures.  These are French Hussars from the Franco-Prussian War, and as before, these are castings from Pendraken - and they are amazing quality sculpts and castings.

There are a number of different gaming options out there for this period, but consistent with my recent 10mm output for the period, these are intended for use with Bruce Weigle's "1871" rules. Each base would represent two squadrons of cavalry, so the two bases together would represent a French cavalry regiment in the game.

These little fellows are wearing the light blue coats, kepis and red pants of the newer Hussar uniform that was still in the process of being issued in 1870.  Even though they are small little guys, the level of detail on the sculpts is incredible, and I love how Pendraken have given them an animated, dramatic look - charging forward, sabres drawn, for the glory of the French Empire (and, later, the French Republic).


Together with the Chasseurs and Dragoons, I have close to a division's worth of French cavalry ready for a game of "1871".  But there is always more to do...I still need to get many more Prussians, and some Bavarians, painted up before we try these rules.  Summer is approaching (on the calendar, if not in the climate), so hopefully my summer painting will bring some more progress to share on more of these little fellows.

Thanks for visiting the Blog, have a great day!
Posted by Greg B at 9:34 AM 6 comments:

Not too much painting happening these days, but I'm chipping away here and there at a "small" project - 10mm Franco-Prussian War.  These are castings from Pendraken, and they are really quite amazing - very small, of course, but sculpted in cunning fashion so as to give you little bits of detail here and there to jump on to.

The Pendraken figures have cast flags on them...I thought this was a terrible idea - and to Pendraken's credit, you can order separate flag bearers with empty poles and then use paper flags - but the scale is small, and as flags go, the French one is pretty straightforward...my free-hand is nothing to write home about, but I'm starting to like the look of the painted flags in the small scale.

So there are three bases of French line infantry:

And two bases of Chasseurs a Cheval:

Still not enough 10mm chaps painted for a game as yet, but getting there slowly-but-surely. Watch this space for more progress (I hope!). Thanks for visiting, and have a great day.
Posted by Greg B at 9:09 AM 12 comments: