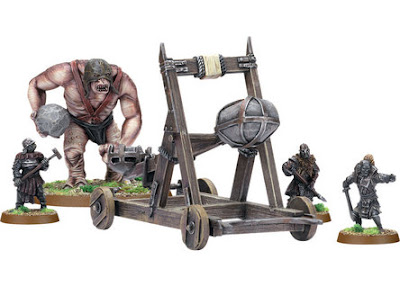 Several years ago I happened to be checking out the toys at the Dollar Store and came across a set of plastic knights which included a catapult. I thought this had potential as a Mordor Catapult to add to my companies of orcs and warg riders. At only $1, it was no great loss if it didn't work out. The Games Workshop version comes with a troll and 3 crew, but at a price tag of around $70, I was not too eager to part with my cash. The knights were passed along to a colleague for his son to play with, and the catapult ended up in the projects box where it sat until now. At Christmas, I received a GW Gondor Battle Cry Trebuchet as well as some 1/72 scale siege equipment by a Russian model company called Zvezda. This inspired me to work on some heavy artillery for my Lord of the Rings armies. Taking a break from painting my WW2 Canadians, the Mordor catapult was the first project out of the starting gate. 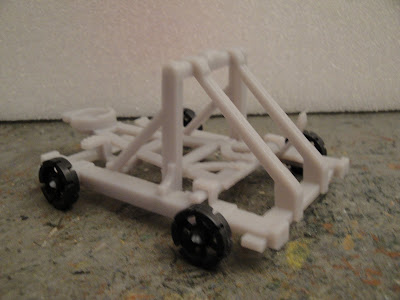 The Dollar Store catapult is seen above. It could actually launch some small projectiles that come with the set, but I wasn't planning to do that on the gaming table. It had spoked wheels similar to the ones on 19th Century fortress artillery mounted on iron carriages, and a cheesy looking spring and release mechanism that didn't fit with my picture of a Mordor siege weapon. The spring and release mechanism were cut away and the wheels were filled in with epoxy putty to make them solid. 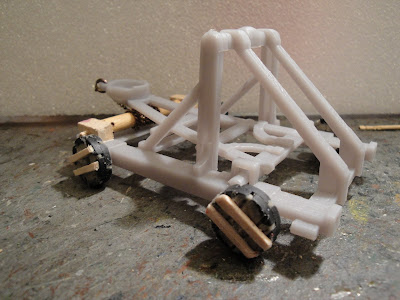 Bits cut from a coffee stir stick were added to the wheels to mimic the wheels on the GW catapult. 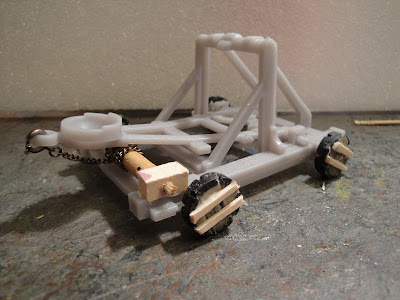 A winching mechanism was fashioned from some bits of balsa wood, a short length of wooden dowel, some 2 cm long pieces of bamboo barbecue skewer and part of a cheap costume jewelry chain that my wife was going to throw away. 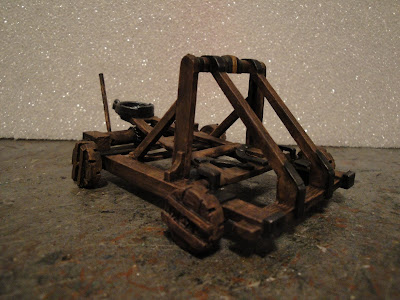 After initially spraying the catapult with flat black primer, the whole thing was painted dark brown, followed by dry brushing a light tan on to highlight the wood grain in the casting. Metal parts were painted black and then dry brushed with gun metal. 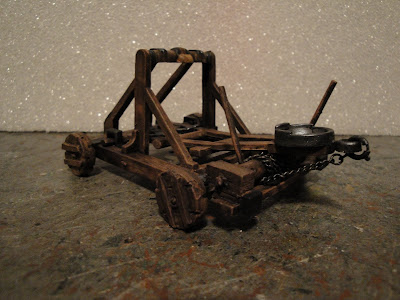 As a final touch, the catapult was painted with a liberal wash of 'Devlan Mud', a favourite medium of many of the Fawcett Avenue Conscripts for shading and weathering. A couple of evenings work and my $1 purchase looks as good as the more expensive GW version. I managed to find a Cave Troll chess piece for $2 on eBay that will be painted up as one of the crew, along with a few orc warriors that will be converted to artillerymen.
Posted by Dusty at 11:09 PM

Very impressive. The DS model looks sturdier than the GW one. After my experience making Treekins, I can say that a real hard-core wargamer is someone who spends dozens of hours of his free time making sure GW doesn't get his money :-).

LOL! Then call me "hard-core".

Nice job on the catapult! One of my favorite parts of the hobby is finding wargaming pieces in unusual places. I had not though to check out the dollar store before but it will certainly be on my list now after seeing your wonderful conversion.

Always wanted to scratchbuild Grond. Perhaps, one day...thanks for the motivation ;-)