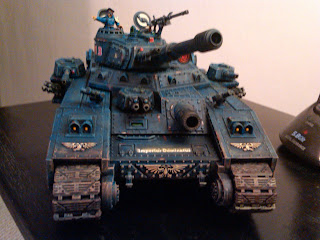 Well, it was a disappointing outing points-wise in the painting challenge. I knew I would never catch up, but wanted to finish with a bit of a flourish. So on the 31st I painted up something that had been in the basement pending pile for over a year - a 40k Imperial Guard Baneblade!

As an avid Imperial Guard player, I have wanted to have a Banbelade on the table for a long time. It is the quintessential absurd-yet-cool Imperial super-heavy-tank, armed to teeth and ready to take on anything from peace protesters to Chaos marines. I had been hemming and hawing for a long time as to what colours etc I would use, and in the end I just took the plunge and painted it up to match my other blue-themed forces. This sucker will be able to roll out with anyone from the Cadians to the Preatorians. 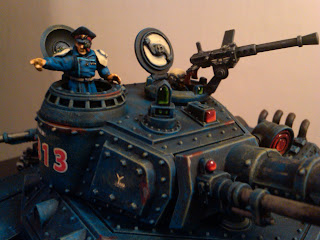 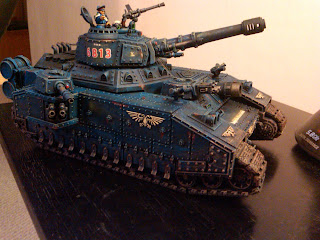 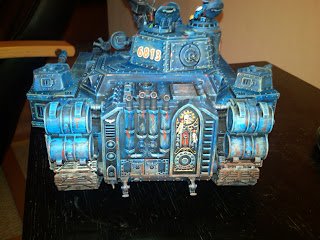 This kit is just excellent. There are several different options for the model. The spare bits are awesome. The assembly is great, and highly idiot resistant.

Now we need to roll out the Imperial Guard for some kind of huge mega-smack-down! With a battle cannon, coaxial autocannon, demolisher cannon, three twin-linked heavy bolters and two lascannons, this sucker is ready to dish out some serious abuse.
Posted by Greg B at 1:40 PM

That thing is freaking awesome! Great work Greg. I especially like the sacristy on it's rear and the religious-themed periscopes. Very cool.

Great job! I love the gothic look of this rolling fortress.

I'd like to use that blue colour you got on your tank for my crinsom fists marines. Would you mind to tell me recipe? :)

blacksmith - the blue is actually a lot of dry-brushing, but the "recipe" is not too hard.

I start with the model completely primed black.

- I then do a very light-touch dry-brush of GW Ice blue.

At that point I weather the vehicles quite a bit, but one thing that will impact the blue on all parts of the tank is a light final dry-brush of GW desert yellow. You don't have to do that if you want the vehicle looking like it is set for a parade or anything...