I am continuing with a minor project to update my Imperial guard vehicles with new decals and more weathering. For my Chimeras, that venerable Imperial Guard IFV, there was an extra step beyond painting - new turrets. Many years ago I saw a conversion on the GW website that showed turrets from the Space Marine Predator kit on a Chimera. I really liked that look. It made the vehicle look a little more like a "modern" (a realtive term in the 40k setting), like a sci-fi Bradley IFV or something. At the time, you also had the option of giving the Chimera an autocannon in the turret, so that killed two birds with one stone, because the standard Predator turret contained an autocannon. I butchered a Predator kit post-haste and soon had a Chimera with the new turret.

But then I delayed, moved on to other projects etc. and time passed. I had the one APC with the new turret, and others had the old turrets, as well as other issues similar to old Leman Russ tanks (decals with silvering etc.). The mish-mash didn't make a difference on the table, but it did annoy me slightly.

This picture below gives a sense of the "before" state. Like the old blue tanks, not bad - but could be better: 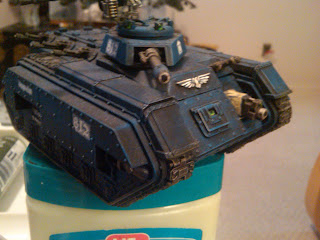 It was like a hobby version of a real defence appropriation project - government promises upgrades to the vehicles of the armed forces, but only does one for the press conference and then forgets about it. I decided that enough was enough, and that the Chimeras would get the new turrets while I was working them over.

In the process I simplified the vehicle add-ons too. The previous Chimeras all had hunter-killer missiles, searchlights, stubbers and other stuff. I kept with the heavy stubbers (love the look of those things, and they are good in the game too) but none of the other fluff was added. When you have a lot of vehicles in the detachment, these little add-ons eat up points better invested elsewhere.

Now only the original "upgraded" tank has a hunter-killer etc. That particular vehicle will serve as the IFV to carry the command platoon, and the extra fluff will help it to stand out as a "command" version.

Here are a couple of "after" pictures showing the new tanks, with new tactical numbers and weathering. 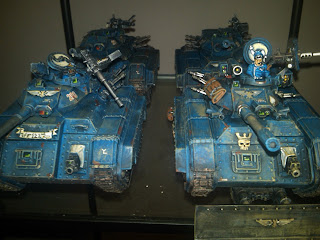 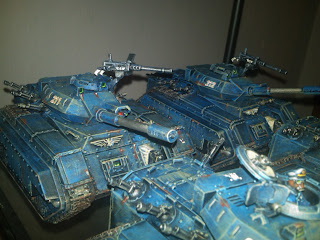 The Chimera in front to the right was the first one to receive the new turret years ago. The others are new ones.

I don't think the Chimeras can have autocannons anymore(although who knows how long until an "Imperial Armour" book brings that option back) but I don't think there are set rules as to what a multi-laser "looks" like. I am glad the Chimeras now pretty much match each other, and match the other updated vehicles.

I still have some Imperial Guard vehicle work left to do. I may add another couple of still-unbuilt tanks to the lineup, and I still have a spare Chimera turret, so one more Chimera would not hurt. I have some other sprues lying around that could create some fun heavy artillery conversions. Plus, Dallas has that Ork flyer, and we can't have our armoured column without some mobile air-defence, can we....
Posted by Greg B at 8:49 AM

The command track does stand out.

Great stuff dude! You have inspired me to revisit my Plague Marine army and tune them up a bit... did that on the weekend. Blog post coming soon!

I love the look of those things

Now, about those 28mm Austrians you're supposed to get done... I'm now officially ready to rumble. Just sayin'...

I'll be back to horse & musket soon enough - just want to finish some of this sci-fi stuff "while I'm at the store" in terms of momentum.