Some tweaks for the PDF

I have been reading the book "Titanicus" by Dan Abnett - a hugely awesome read that fellow conscript Curt tipped me off to, and I recommend it to everyone - and the book has inspired me to continue fiddling with my Imperial Guardsmen.

A bit of background...it was almost six years ago that I was able to acquire three boxes of old, Rogue Trader era plastic Imperial Guardsmen. I just love these figures - I still remember getting my first box of them from Campaign Outfitters on Corydon Avenue! My painting skills were not great then, but I would paint those guys, then re-paint them, then re-paint them...on and on. GW has since re-done the Imperial Guardsmen several times, and the design has moved very far from these old original plastics.

When I found these treasures on Ebay, it was cool (for a nerd like me, I mean) at so many levels. I assembled a "force" that could work for Rogue Trader games, or be used as troops in the current version of 40k. In the 40k fluff, the Imperial Guard stuff is focused on the troops raised and sent to warzones (Cadians, Vahllans, the god-awful Catachans etc.), but there is also some small mentions of "PDF" regiments, i.e. ones on hand to protect their own world.

To me, the Rogue Trader guys fit in this niche - PDF troops for Cadia. The size escalation of the GW figures actually helps this, as the RT-era figs look like lean, second line troops compared to the bulky lads of the first-line regiments. To help the flavour even more, I tried to blend the look a bit, using bits services to acquire the "current" lasguns, canteens and other bits from current Cadian plastics for these guys. Painting-wise, I tried to copy the RT-era markings (stripe on the helmet, symbol on the side, company ID on the shoulder and so on).

While they "work" for current 40k, I also wanted them to "work" for Rogue Trader - back before they had Chimeras, Leman Russ tanks and other stuff. So I did a Rhino for them - after all, the Rhino was just a basic, STC mainline APC for Imperial factions back in the RT-day, before evolving into the Space Marines' sacred door-stop. To match the "flavour" of the PDF guys (i.e. "new" equipment but old guys), I painted a new Rhino model instead of an old one (probably a miss there, but I have trouble finding the old Rhinos on Ebay).

So - the sum of this rambling was that on the weekend I upgraded the decals on the "PDF" Rhino (for RT games) and also finished some extra command guys to give another command group (so they can work for "current" games). I also did a mortar team (which, on reflection, I should have converted into a "mole mortar", but anyway :). Here are a few pictures: 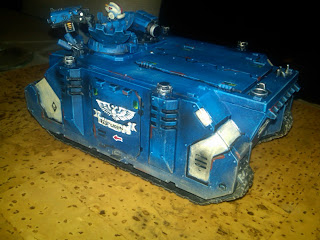 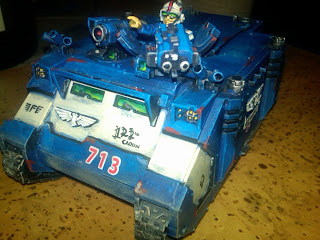 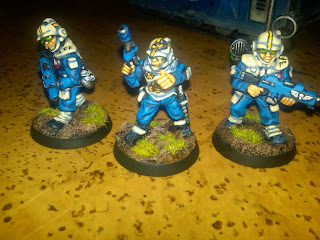 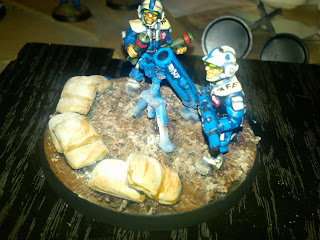 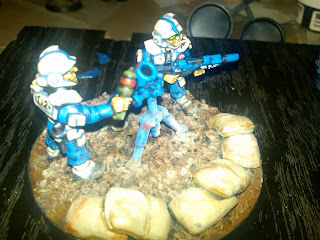 Up next for the PDF will be a Predator or two (which used to be a generic Imperial faction light tank), a couple more Rhinos, a Dreadnought (once available to all Imperial factions, I think) and possibly some converted robots.

I might hunt for some old Rhinos on Ebay, and if you see any old Predators, flip me a link!! I am also hoping that for a "fun" game one day we can bodge up a "PDF Codex" and have a game in the current rules.
Posted by Greg B at 9:26 AM

I'm looking back to the Rogue Trader days as well. Seemed to be more fun then. Remember the shampoo bottle grave tank?

Fantastic! BTW, Dan Abnett is the special guest at Adepticon in Chicago in April... just sayin'... ;-)

@ REDTROOP - yes - the shampoo bottle grav tank is a real nostalgia point for sure.

Love the old school figures, and using the for PDF troops seems apt.