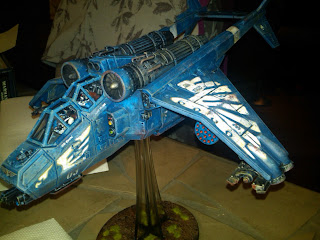 Last week I tried to use some really cool decals from Forge World on my Valkyrie, and kind of botched the job a bit. I wanted to try again, so I put together my last two Valkyries from the "Maelstrom pile", and this weekend finished painting the first new one.

When decal-time came, I thought a better way to avoid the headaches would be to attempt to paint the imperial eagle design right on myself. If it sucked, I could just paint over, so I went for it. 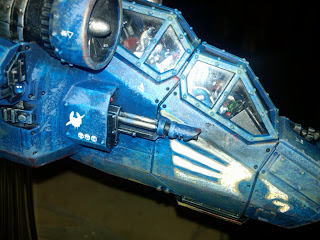 I used GW Shadow Grey first to set the outlines of the design. When that was dry, I did a layer of GW Kommando Khaki, and finally a layer of white paint for the "top". 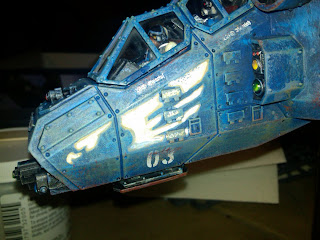 The design did not turn out too badly - still far from perfect on the wings, but you get an idea of what it is supposed to be. The Imperial Eagle design is actually kind of tricky once you are painting it at that size, but it was close enough for me, and much less of a hassle than those intricate decals. 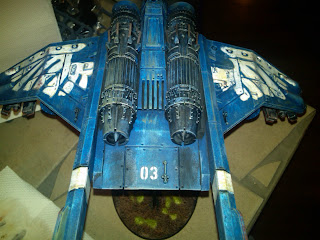 After painting the design I put on decals for the other markings (vehicle numbers, kill markings, pilot names etc), and weathered the sucker. Learning from a really helpful Flames of War You-Tube demo that Kevin H was kind enough to forward to me, I used a chunk of sponge to do a lot of weathering. I loved the effect - probably too much. Seems like any time I get the hang of something new, I overuse it, so this poor Valkyrie really looks like it has seen some tough service. 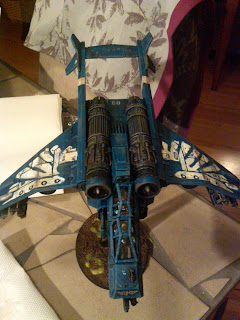 I used pigment powder around the exhaust, cannon barrel and engine intakes. Again, probably too much - but it's all fun. I'm not even sure a multi-laser would even scuff up the nearby paint, but for the sake of experimenting, I am going to say this one did. 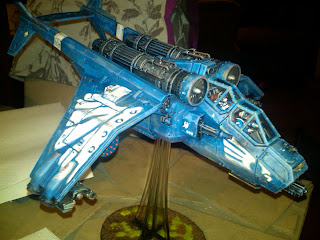 I put a few kill markings on the side, including one in the shape of an Eldar Falcon. So you know this model will be the first one to get "doomed" when they face Dave V's warhost... 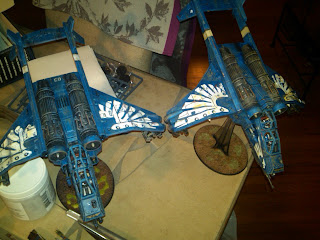 The last picture above shows the Valkyrie with the painted design (on the left) beside the Valkyrie with the decals (on the right). I have one more to add to the squadron, so I am hoping the eagle design will be a little easier to paint now that I have tried it once.
Posted by Greg B at 3:25 PM