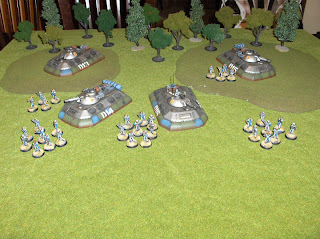 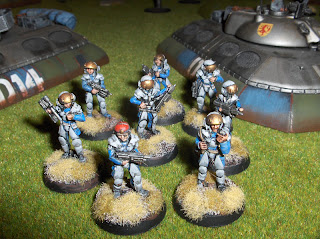 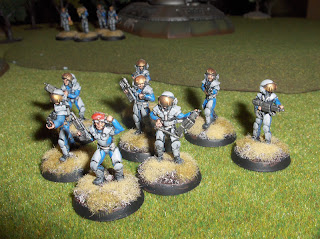 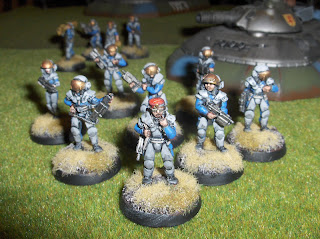 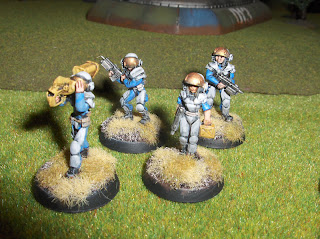 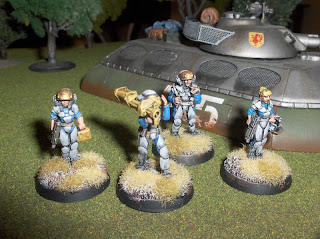 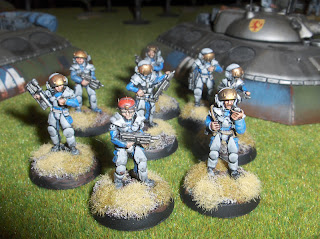 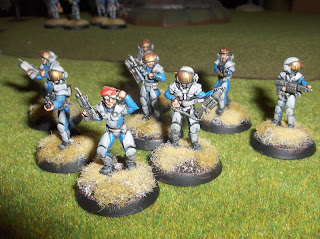 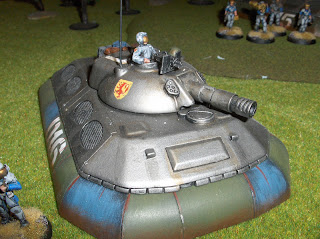 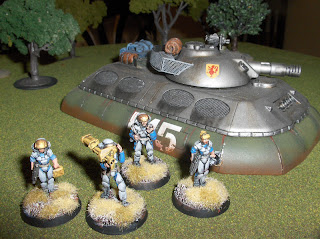 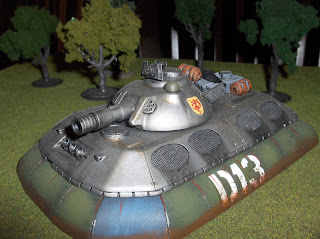 Looking forward to seeing them in action in the near future!
Posted by Dallas at 12:52 PM 7 comments:

Wings Over the Golan: Syrian MiG 21 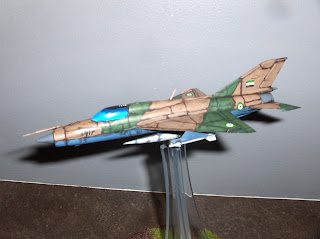 As our readers may recall, one of Greg's many cool projects this year has been to paint some forces to refight the Yom Kippur War of 1973. Greg has painted lots of tanks and infantry for the project, and I wanted to kick in a little escalation to goad him along (and provide another cool toy for our games!) 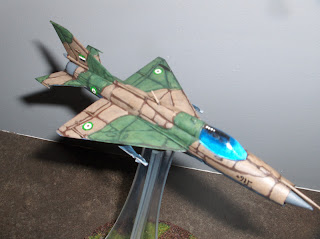 Quite some time ago I picked up a 1/100 MiG 21 "Fishbed" by Tamiya to paint up for the project. I've had it sitting in primer for awhile and after completing the Slammers infantry yesterday, I pulled the MiG out and painted it. 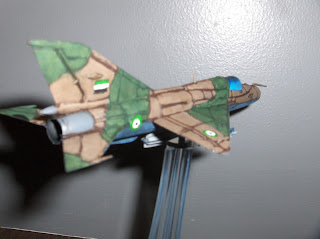 I'd found the colourscheme on Wings Palette, a Russian website that is my go-to for combat aircraft schemes, and found a plane that was noted as flying in 1973. 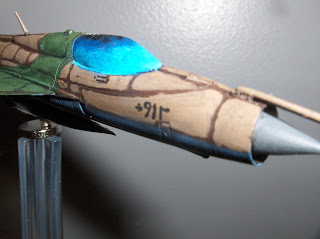 Tactical numbers in Arabic were added by brush. 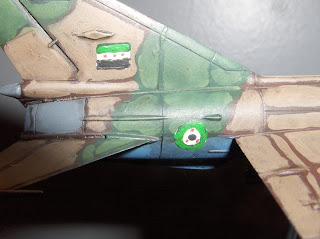 I also freehanded the national markings. Although I had thought that the green roundels had been superseded by red by the time of the Yom Kippur War, Wings Palette indicated that this aircraft remained in green, so that's how I painted it.

This was a fun painting project for a Saturday afternoon and I'm looking forward to seeing it in action over the Golan in one of Greg's fantastic games!
Posted by Dallas at 12:13 PM 1 comment: 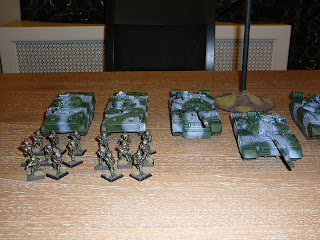 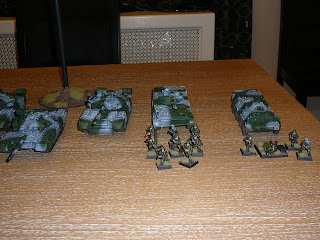 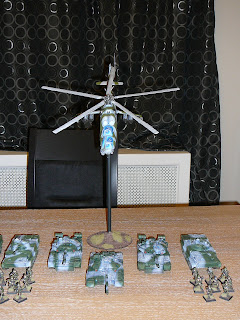 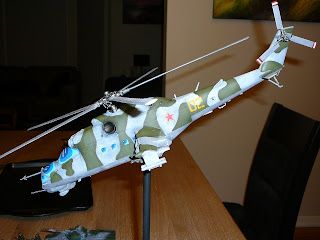 Finally finished the modern Russians. I can't even remember when I originally got all this stuff. I think Greg and I need to have a "Crisis in Kablikistan" or something similar with some of his Russian Kit.
Posted by MFraser at 7:16 AM 7 comments:

My first attempts to assemble Khurasan's exciting new 15mm near-future DOE Gunship were less than satisfying.  With the help of Dallas, who pointed out how to mount the tail fins properly (tip - not straight), I was able to finish two of the models and I got them painted during the NFL games this week. As I watch the Lions are struggle to keep up with the Bears tonight (while I write this, Jay Cutler just took a strength 10, AP 1 hit from Ndamukong Suh), I finished them off!  Here are some pictures.

My original try at magnetizing the model so it would stay on a flight base was insufficient.  The DOE is a healthy size, and a small magnet is not up to the task.  I was done screwing around, so I took out the large drill bit and bored a large hole in the base of the main body, and then mounted the other piece of the magnet on the top of a GW flying base.  These magnet bits are actually courtesy of a local not-for-profit's logo lapel pins, so in a way these models will be gaming for a good cause. I think I probably overdid it a bit, but these things are NOT falling off...

With the basing riddle solved, I had to figure out how to assemble the damn model properly.  As I said, Dallas gave me the right tip.  For my first model I had mounted the tail fins flush to the hull.  This fit the tabs properly into the hull, but was actually incorrect, as the vertical fins at the back should not be straight up, but should tilt inward, so the joining tail piece will fit.  In order to do this properly I had to shave off the tabs a bit so the would fit properly with the main hull. Not enjoyable.

A further bit of stupidity on my part - I put the adjoining tail fin piece on differently on each model - and I didn't notice until I had primed them! Once again, I will never win an award at IPMS shows...so in a way, each one is unique...

The fun continued when trying to figure out the wing-mounted rocket launchers.  There are four on each model (two of them are hardly visible - or paintable - once the model is assembled, as they are tucked right in).  As I said in my original post, this model is a blizzard of parts, and it is not very forgiving.  I highly recommend assembling and mounting the rocket pods BEFORE mounting the wings to the hull.  For the record, Khurasan does recommend this too :)

Even when you do this, it will be tricky to make sure the rocket pods are all pointing in the right direction.  Prepare a list of useful swears before assembling this model. 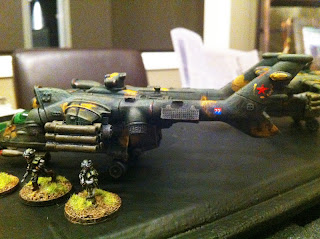 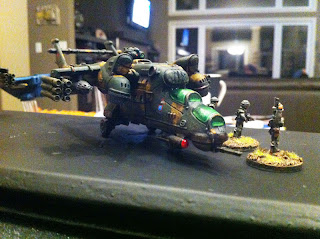 Khurasan also provides options for the landing gear - up or down.  I went with down - it doesn't look as slick when "up in the air", but gives a little flexibility in terms of having the model land or using it as an objective on the table.  If I ever do another one of these - or if I manage the save the first one I tried to build - I will build it with the gear up.

I painted the models with something along the lines of a "sand & spinach" camouflage scheme.  I used some decals (from a British tank division, I think - it's 15mm scale, so I didn't get too worried about that as they are hard to recognize) to give the Gunships unit and tail markings.

I am very jazzed to have these finished.  These models were not simple - there was lots of flash, tricky parts and a great deal of refining needed with a sharp hobby knife.  The surface of the resin bits was a little pock-marked in some places, and had a bit of a rough finish in others that was a bit tricky to paint.
But all the swearing and crayon-snapping was worth it in the end!  Now to get them on to the gaming table, where they can get shot down on the first turn...
Posted by Greg B at 9:30 PM 13 comments:

Among Khurasan's many fine 15mm products there is a SEAL Team kitted out in cool vision enhancement equipment, armour and the latest weapons.  The models are meant to represent a SEAL team of the current time, but look so "out there" they are perfect for near-future/sci fi uses.

There are eight models in the pack.  Six of them are carrying assault SMGs (two with grenade launchers attached), one has some kind of assault shotgun (I think) and the last has a SAW.  All have spooky looking optics and light body armour.  Many gamers have used these for sci-fi models.  So many, in fact, that Khurasan lists these figures with their other sci-fi infantry (scroll down aways at this link).
I painted these guys in relative muted green colours - at first I thought they would be fine special forces trooper for the Nova Respublik faction, or just generic special forces troops. But Khurasan is apparently working on Spetznaz-type troops for the Nova Respublik, so until then these will do the job.  They could also represent elite mercenaries, or any other generally sinister, well equipped force that shows up in the dark to get the job done.

These guys were a lot of fun to paint. I'm not sure what sculpting plans Khurasan has in mind, but some more guys for this range - perhaps with some AT-weapons, or sci-fi-looking blasters - yes, things real SEALS do not use - would be pretty cool!

In the meantime, rolling these guys out as D10 quality troops in a game of Tommorow's War - or Force on Force - would be fun!
Posted by Greg B at 4:04 PM 5 comments:

Earlier this month I played at a local Warhammer 40K tournament, Mechani-Kon. It was my fourth outing at this tournament, run by Alex B and Thurston H. One of the reasons I enjoy playing at Mechani-Kon is because it is a Renaissance Man style tournament, rewarding several aspects of the hobby: painting, conversion, sportsmanship, game play...

Below are photos of most of the finely modeled and painted armies that were brought out for the event.

Christian deservedly won  the Best Appearance award. Note above the detailed objective counters in front, the painted backdrop, and the overall look and feel of the force.

Below, check out some of Christian's detailing:

Below, note the camo detail on Kevin's models, including the Aegis Defense Line.

Unsurprisingly, this pair of giant war machines was NOT over the top. With no scoring unit,s they always had to try and win on secondary objectives and, as two detachments, any Titan kill counted VPs for Warlord.

Below, note the detailing on Steve's vehicles.

Grey Knights (I apologize for the crappy photo):

Below, note the conversion of the new Hell Brute model.

More Tau (Tau have really made a comeback with the new 6th edition rules):

Some details of Brock's forces:

Brock's Hydra anti-aircraft tanks (surprisingly, there were not an overwhelming amount of aircraft fielded at the event):

Note the clever conversions of motorcycles to count as Rough Rider cavalry:

The conversion and detailing on Byron's models is off the hook:

It was a long day, where each player was scheduled to play four two-hour games. The event was well organized, and everything seemed to run smoothly and on time. They brought in pizza and drinks for supper, and sold snacks and beverages throughout the day. The venue, the Robert A. Steen Community Centre, was well maintained and clean.

People seemed to bring balanced armies. For example, I did not see any Cron Air  (i.e. Necron air force with maybe 6 or more planes). I fielded a variation of my Eldar Swordwind, with even more Dire Avenger Aspect Warriors, and including a Fire Storm anti-aircraft tank. I went without any psychic defense, which seemed to turn out OK. Yet again, I was the only Eldar player at an event.

The scenarios were challenging and fun, not being the generic scenarios from the main rule book. A week before the event the players were provided with previews of six scenarios, four of which were actually used at the tournament. The scenarios may be downloaded here.

I had four fun games against great opponents; I shall provide more info on my forces and games in a separate, detailed battle report, to be posted soon.

Thanks to Thursty, Alex and everyone else involved in running and supporting the event. I had a blast!