In the Wood Elf army, the Treekins are apparently one of the most efficient unit. Efficient = $ in GW's evil plan to get my money ($25 apiece). To further exasperate me, the Treekin models exhale an ugliness I've never seen before. They evoke a pile of dead logs animated by a semi-evil spirit instead of an anthropomorphic tree. But inspired by MikeF's trebuchet and Dallas' fabulous scratchy scratchbuilts, I've decided to build my own Treekins! On the Web, I found that many players do the same, and it could be as simple as picking up twigs in the backyard and gluing on extra Dryads' parts. 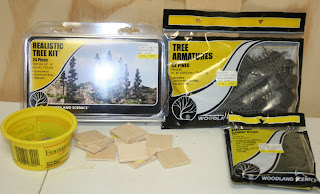 For my project, the ingredients would be scenery material. All the tree units in the Wood Elf army are deciduous, so I opted to create a conifer creature. 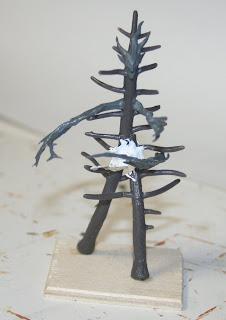 Two tree trunks tied together with metal wiring make the "skeleton". Extra bits from the Dryads were then added. For the colors, I tried to reproduce the bark of the Japanese Red Pine. Adding the "needles" proved to be tricky. Instructions suggest to simply cover the branches with white glue and dip the tree in a box full of green flock. But to get the look I wanted, I had to glue the bits of flock one by one. Total cost of material to produce 12 Treekins? About $25. 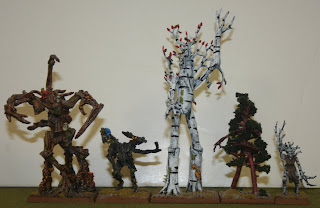 Here is a family picture of the different kinds of tree units enrolled in the army. From left to right:
- GW Treeman
- GW Treekin
- GW Ent
- My Treekin
- GW Dryad
I didn't like the look of the Treeman either, so I bought an Ent from the Lord of the Ring collection to use instead of the official Treeman. I call this fellow "Bob the Birch" (wave back to Bob). Next to the right is "Mama Matsumoto" (the "real pine tree") and "Baby Birch". 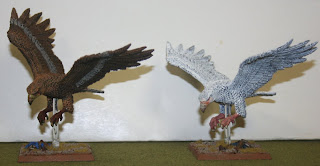 These eagles were completed in time for the challenge. The right one is an albino. On the bases, some Brettonian peasants are taking a nap.

These are the last units of my Wood Elf Army. The project is now completed. It's time to work on those Russians.
Posted by Sylvain at 10:50 AM

Nice work Sylvain! "Come and chop on our door..."

Oh man! That is sweet! I totally see some treemen in the near future for my Hordes of the Things armies!! (I was wondering what to do with all the leftover trees!?)

Those look great, Sylvain. You're right, the GW Treeman casting on the far left is complete ass. I like your conversions much, much better. (Nice to see the Ent in there as well)