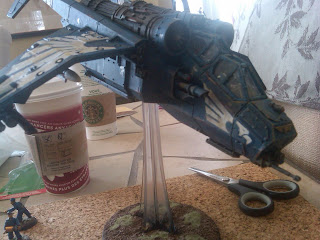 More fun with the Imperial Guard touch-ups/updates/etc. After touching up/weathering/adding to my entire collection blue-themed Imperial Guard vehicles, I didn't want to leave out the Valkyrie. Specifically, in addition to adding some weathering, etc I was tempted to apply one of the "eagle" decal sets that I had ordered from Forge World. The decals would replicate the effect seen on the painted example that is stamped on the back of the GW Valkyrie box, which looked really cool (but also like it was done by a pro).

I had used part of one set on the CO's Valkyrie in my Elysian collection, and complexity of the wing features prompted me to stop there. As it was, the Elysian skimmers had a lot of fun markings already, so enough was enough there. The decals looked tricky - they even had instructions on the back of the sheet about how they should be ideally cut up and placed to match the panels on the model as closely as possible. Here is a picture of the instructions for one of the wings: 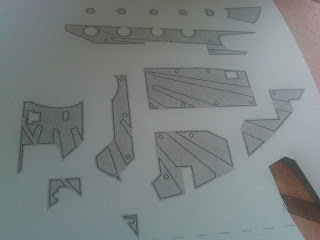 Feeling chuffed about the progress on the blue guys, thinking about how it might look cool to have that crazy look on at least one model, and deluded that I could somehow match the outcome seen on the Valkyrie box, I figured "Why not try and see what happened?" Oops.

Here are before pictures for comparison: 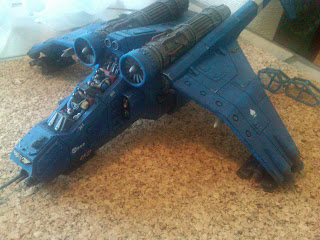 Here are various after pictures, together with some editorial. 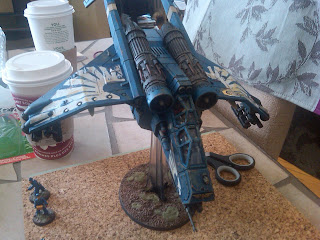 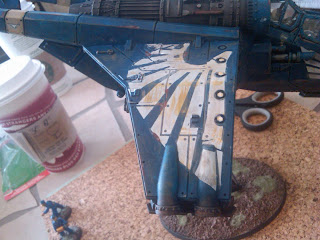 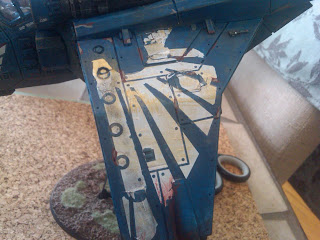 I started on the Valk's right wing first, carefully cut up the decal, and went to work. I SUCK. When the small decal pieces were cut up, they broke very easily, and so the thing became a patchwork. For the left wing, I just threw caution to the wind, thinking that moving the decal as one large piece would be more viable than several small pieces. I SUCK EVEN WORSE AT THAT. It was quite a hash. 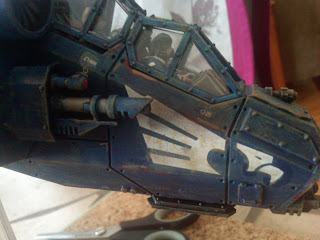 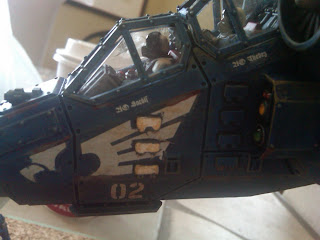 All of the decal softener, water etc. was not helping. I still had trouble with silvering too, despite gloss coat etc (I must have messed up something). To make the most of it, I figured I would really, really weather it a lot, and touch up with some white and blue paint here and there. I hope, from a couple feet away, the model looks more like a battle-worn skimmer than something with a bad decal job. 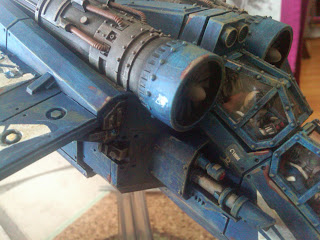 One positive from this project was experimenting with the pigment powders. As Dallas had warned, it's very messy. I used a soot colour around the engines and exhaust. In the end the effect was only subtle (not even sure you can really notice it in the pics) but I really like it and I'm looking forward to practicing more with these powders.

In the end, not my greatest work, but not the end of the world either. And I still think I can figure this out. I have some un-built Valkyrie models left (God love Maelstrom games), and I have three storm trooper squads for just this lonely Valkyrie - can't have that, can we? I am determined to find a way to get this look right, so watch for more lunacy on the blog.
Posted by Greg B at 2:06 PM

It still looks pretty good, Greg! I can't see the parts you mention that seemed to be a real problem. But if there's bits you're REALLY not happy with, take a Dremel grinder to those areas a bit, hit it with some metallic paint and call it "Battle Damage!" That usually takes care of most problems.

You think?? They look OK in the pictures... and you're right, weathering helps.

The pictures hide a lot (and so did the weathering) but up close you see the silvering and breaks in the decals. The powders helped a lot.

The cracking isnt that noticeable from the pics, but even still, it might add to the dated look. The only other thing clearly off is the misalignment of the decal on the nose cone, and some some small pieces of decal missing altogether. Otherwise looks great!