A while ago I finished the bulk of my space marine refurbishing project. I had started a space marine army at the end of grade 12 (that's the year 2000, just so there isn't any confusion) and stupidly painted them as Salamanders. Codex Armageddon was new and it had a cool army list for the army. Like all things that reside on the fringes of GW's rules and army lists, the salamanders were no more and I was stuck with snot green painted models. Repainting began shortly after 5th edition came out.
Below are some of the odds and ends that I always ignored in past editions of space marines, but now appear to be pretty good. 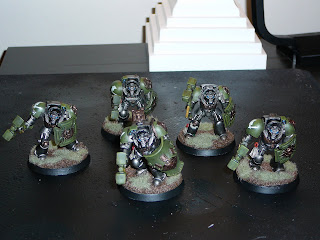 Former tactical Terminators who have had their arms swapped out for TH/SS. The 3+ invulnerable is the main reason for this. 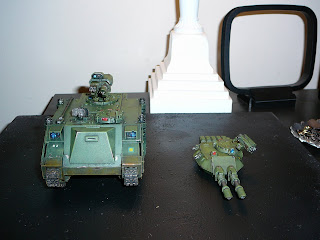 My future Britz have used the above Razorback for transport in the past, but I have something else for them to ride around in (once I get it painted) so I'm giving it to the marines. I also converted the turret to a lascannon/twin-linked plasmagun. Beside the Razorback is an alternate turret for my Predator. I have another Predator hull with lascannon sponsons, but it's too expensive points wise (maybe I'll paint it for the next edition).

Hopefully, I'll have pictures of a new Sternguard unit soon.
Posted by MFraser at 7:08 PM

I should also add that my prime motivation for this project is to get some anti-Tyranid units together, so that I can 'beat Dallas'.

I really like those Terminators. I'm especially keen on how you just used colour on the shoulder pads and gauntlets with bare metal for the rest. Nice contrast - well done.

Sorry, I notice now that the colour is not on the gauntlets but on the weapons and shields - still looks groovy.

We'll have to start a bit earlier this time. The last game went a bit late.

If we get deployed just after 8 we should be in fine shape. 40k just seems to bog down a bit more than some other games we play.

Endless special rules = longer game. Still, we have a bit of recent 40k practice, so it should go quicker. If it's getting too late, just charge the Tyranids...I'm sure that will work out fine.

Mike - do you have some snipers? That would be a great way to take town the big bugs...

If I remember to Infiltrate, some of my stuff might be in close combat in turn one! That might help speed the game along...

In order to get really familiar with playing one's own army/armies, I find that there's no substitute for actually playing a lot of 40K games.

Dallas, I don't recall your list, but aren't there a few methods available for getting bugs into combat fast? Running, infiltration, outflanking with Genestealers, deep striking with a spore or a Mawloc, etc.

Oh yes, lots of stuff is Fleet, most Moves Through Cover, 'Stealers Infiltrate, and Trygon and Raveners Deep Strike.

Sounds like I already lost! Maybe I'll just bring a six pack instead ;)

Just bring the six-pack AND your force of Marines and everything will be fine :)