Here's my sole entry for the painting challenge (sigh - the Colonial Marines aren't even done). It's that Eldar Autarch conversion I was working on, based upon a Games Workshop Howling Banshee Exarch. From the fluff, the figure is armed with weapons and wargear associated with both the Howling Banshee and Fire Dragon shrines. 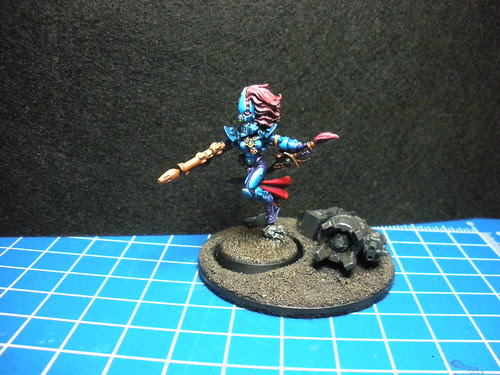 Black primed, then sprayed white highlights; I like the stark contrast between light and dark. Under-painting in various acrylics and GW glazes. Final blending and details added with tube oil paints. It's kind of like painting the figure twice, but I find it allows very subtle colour transitions. NMM for metals; I agree with KevinH, often metallic paints do not scale down well because of the courseness of the pigment. 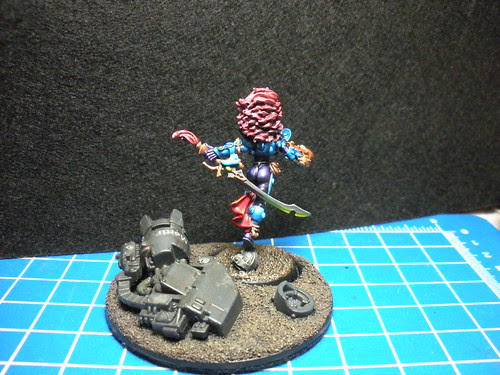 Figure is removable from its vignette display base for gaming. 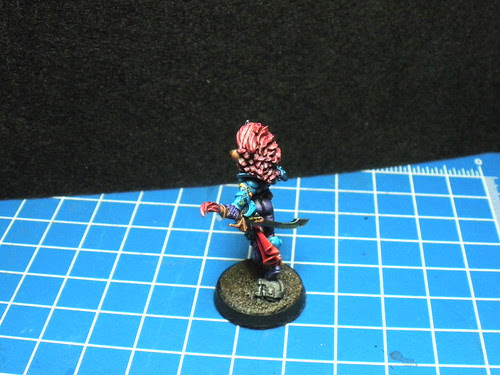 It is the new HQ for my tournament army. Very inexpensive points-wise, compared to other Eldar HQ's. The melta gun and power sword provide capability against both tanks and infantry. Her Banshee Mask is a cheap "strike first" button for close combat. She'll ride with one of the Dire Avenger squads inside a skimmer tank.

Beautiful brush-work, Dave! I particularly like the NMM effect on the sword.

Of course you know that with this kind of paint-job on a new figure she is doomed for at least several games? Oh, wait, I forgot - its an Eldar figure in one of your armies... nevermind. ;)