Reinforcements for the 2nd Canadian Division

The painting competition is quickly becoming a distant memory [This happens a lot when you get to my age, regardless of how recent the event] and I ended up so far behind the pack that the leaders were but specks on the horizon, rapidly increasing the distance between me and them.

I am hoping to achieve a personal goal of increasing my painting output for the year 2011 and by December 31st have at least one miniature painted for every day of the year. 28 down, 337 to go.

Several years ago I picked up some West Wind WW2 Brits/Canadians [part of their "Berlin or Bust" range - http://www.westwindproductions.co.uk/catalog/index.php?cPath=3_67] which I painted up to represent the Queen's Own Cameron Highlanders of Canada. Since then I have acquired some Bolt Action and Crusader miniatures to add a second rifle platoon as well as some heavy weapons.

Only the heavy weapons (PIAT's, mortars and heavy machine guns) got completed in time for the Fall Painting competition, but the rest of rifle sections have now moved off the assembly line and are marching to the front. Next up is the 6-pounder anti-tank gun and a carrier platoon of 4 Universal carriers. 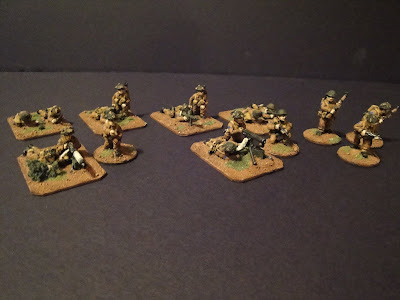 The heavy weapons teams are mostly by Crusader with the exception of the Vickers HMG on the front left, which is by Bolt Action. 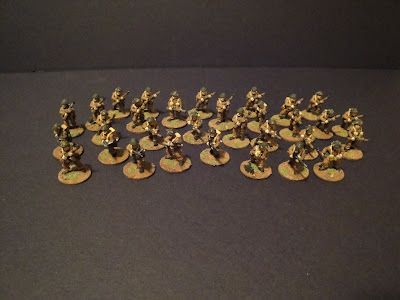 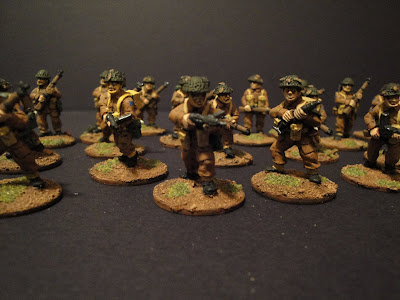 A close-up of some the section commanders, armed with Sten guns.
Posted by Dusty at 6:44 PM