Carrier Platoon moves to the Front

With the completion of my second rifle platoon, it was now time to work on the Carrier Platoon. For the painting and marking of the vehicles, I had photos of the "real deal', a restored Universal carrier, complete with markings of the Queen's Own Cameron Highlanders of Canada, 6th Brigade, 2nd Canadian Infantry Division. When I bought my West Wind Canadians, I also picked up two Universal carriers by Battle Honors. Those were later supplemented by two Bolt Action Miniatures Universal carriers along with enough crew for all four. The BAM carriers came with drivers, but not those from Battle Honors, so I converted two Jeep drivers to carrier drivers by cutting them off at the waist and repositioning the steering wheel. (On a Universal carrier, the steering wheel is vertical.) 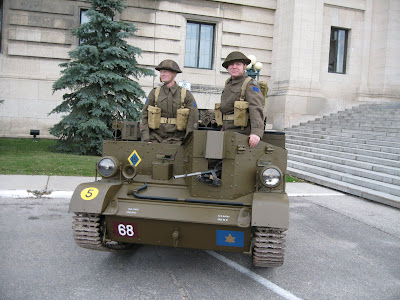 Here is a photo of the vehicle with the owner, Derk Derrin, and me in front of the Legislature during the Camerons' 100th Anniversary celebration. I managed to get a ride in the vehicle but because it was on the road surface, we didn't really get up to speed. Metal tracks and asphalt/concrete don't mix well. 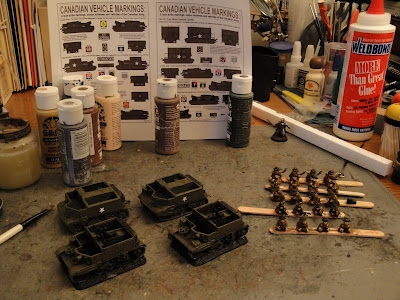 Here is a pic of my cluttered work area. In addition to the photos of Derk's carrier, I was also able to find some pdf files of Canadian vehicle markings on the internet. This proved very useful for producing the tactical symbols for marking the vehicle. In order to paint the crew men, I glued them to Popsicle sticks which makes it easier to handle the figures. The driver and Bren gunner castings are only from the waist up, while the crew that sit in the back are cast from the shins up. 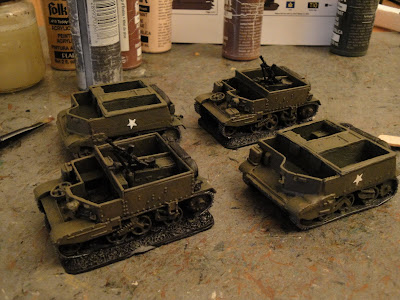 It took me a while to get the colour somewhere close to correct. Canadian vehicles were painted a bronze olive colour and I haven't been able to find anything close that is pre-mixed. I do most of my painting with water-based acrylics from the craft store. A 50/50 mixture of FolkArt 449 Olive Green and 945 Maple Syrup seems to come very close. The vehicles with the crooked stars are the original Battle Honors universal carriers, which are inferior to the BAM resin castings. They are about 10% too wide and 5% too short (most of the missing length being forward of the driver's compartment). 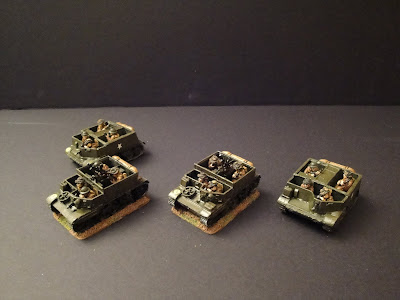 Here is the completed carrier platoon with all the crew inside and vehicle markings in place. To make the markings, I scanned an image of the symbols and shrunk it to size. I then printed enough off on my laser printer, cut them out with scissors, and glued them on with Weldbond glue. I put a black '5' on a yellow circle on the front right fender (bridge weight rating) and white '68' on maroon square, as well as the a yellow maple leaf on a blue rectangle on both front and back of the vehicle. Not as perfect as decals, but it was a cheap way of doing the markings for the Camerons of Canada. 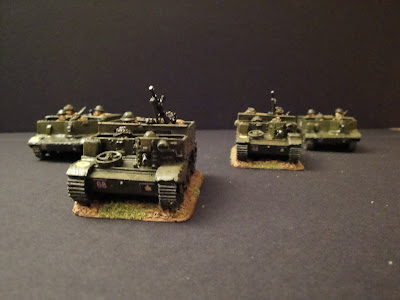 Here is another view from a different angle showing the unit and divisional markings. I am counting these as 20 points towards my personal painting objective for 2011.
Posted by Dusty at 5:49 PM

Nice painting job. I was wondering why you decided to base only two of the four vehicles.

The two carriers with bases are one-piece resin castings by Bolt Action Miniatures that include the base. The two carriers without bases are multi-part metal castings by Battle Honors. The tracks, wheels, towing hitch and front of the driver/gunner's compartment were all separate pieces. I thought about mounting the last two on bases, but felt the models were heavy enough already. I may do it later, just so they all look more uniform.

Looks great! As you say, you can just base them later.