Last night I finished the third Valkyrie model for my blue-themed Imperial Guard forces. The storm trooper platoon will now be able to zip around the battlefield in style - or at least look great going down in flames. 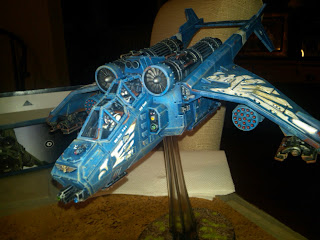 I painted the Imperial Eagle motif straight on to this one, and I'm happy with how it turned out. Was much less hassle than fiddling with those complex decals. I weathered this one up with a sponge and used the pigment powder for exhaust. It doesn't look quite as worn as the other two vehicles, but still looks like it has been roughed up a fair bit. 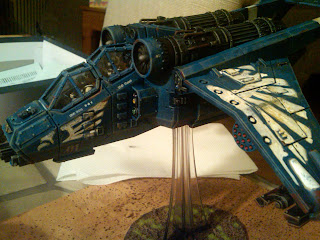 Weapon-wise, the squadron has two ships equipped with multi-lasers and rocket pods, and a single ship with a lascannon and hellstrike missiles. I hope to use these to either carry around my Imperial Guard storm troopers, or just to fly a bit of air cover for for the guard armoured column. Similar to all of the other blue-painted vehicles I have, they can fit with either the regular guardsmen, Preatorians, or Roge-Trader-era PDF-style Guardsmen from my collection.

I hope for these to see their first action when we play a 40k Apocalypse game sometime this spring. 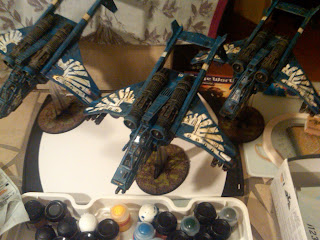 I am pleased to have now finished all of the Valkyries acquired from Maelstrom!

I've become quite used to assembling these models, but right to the end I have struggled with the canopies and the pilots. It seems no matter what I do to fiddle with the pilot models/cockpit, the canopies don't fit well. These blue ones are no exception, but thankfully it doesn't really show up from two feet away. I just don't know what I did wrong - I shaved down arms, lowered heads, removed skull-shoulder pads etc. and still struggled to fit the canopies over the pilot. In the end I think it comes down to the fact that I will never be a great model-builder. At any rate, it won't be a problem for a while, as I don't expect to build another Valkyrie anytime soon...other new and ongoing insane projects await!
Posted by Greg B at 8:12 AM

Between your Elysians and blue guard, how many valkyrie models do you have?

I love the darker metallic blue of these models and how the highlighting is still clean.

Mike - I have nine Valkyrie models total. Three with the "blue" Guard, five with the Elysians, and a solitary one that supports the Gün Schwarm. The Elysians also have a Vulture.

Woah - You are going to need to build an addition to store your hobby stuff! Awesome stuff. Are you going to roll out to the Con here this spring with these lads?

I'm want to give the spring con a go, but it will all be last minute - it's going to be that kind of year.