I finished my Imperial Knight a few days ago and finally got around to taking some pics. I'm fairly happy with it, though I won't win points for originality. Most Imperial Fist players seem to go with this house for obvious reasons. I tried to resist, but ultimately I preferred the bold look of Hawkshroud compared to the others Houses. Plus, I'm on a roll with yellow! 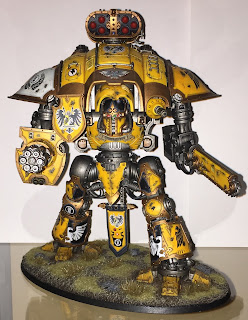 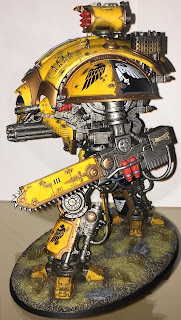 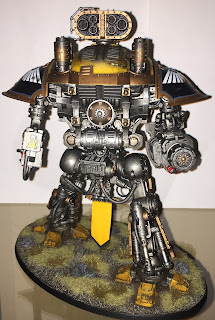 Here is a third unit of Prussians for my slowly-accumulating 28mm Franco-Prussian war project.  As with the previous two units, these figures are 28mm castings from Wargames Foundry, spiced up with a flag from GMB.  There are a total of 24 castings in the unit, with 20 deployed together on the main bases, and four individual figures to be used on the table to indicate the unit has put skirmishers forward.

I really enjoy painting these lovely castings from Foundry - sculpted by the Perry Twins.  But every hobby has its frustrations, and for me the single biggest frustration is applying the black base coat.  This is most efficiently done by spraying it on.  While Vallejo has a very good primer product that you can paint on, I tend to only do that out of desperation when it comes to metal figures, as the primer has a tough time really sticking, and often creates little air bubbles.  A spray can, for all of the negatives, is just SO much faster and more efficient.

But spray cans, in addition to stinking and making a mess, have their own challenges, in that every so often, they suddenly go to sh!t and start ruining figures!  This was the case with several figures in this unit, where the black base coat became scabbed and flaky.

On a few of the figures, some careful painting was enough to work around this.  But on several of them it got so bad the primer coat had to be scraped off, and then I had to use less-than-adequate paint-on-primer instead.

This is SO infuriating.  It usually happens in the change of season, so no doubt there is some aspect of humidity etc to it, but there really wasn't much change in the conditions, so I don't buy that so much.  Some cans are faulty, and there is no way to predict it...man is it frustrating!!! It's bad enough when it is too cold to spray (common in Winnipeg) and then too hot to spray (common in Winnipeg, or at least it used to be), but when a dud can nails you, that's even worse!!

Overall I find the "scabbed" figures don't stand out very much - the beauty of using figures in groups! A new spray can is in action, and the normal painting routine has resumed. I am continuing to slowly tackle my large pile of Franco-Prussian lead in the hopes of staging a "Black Powder" game set in the period.  Slow and steady wins the race...but good thing this isn't a race...

I have also noticed that the excellent "Eagles of Empire" now have Turcos on pre-order...so watch for those to appear this spring!!
Posted by Greg B at 2:22 PM 9 comments:

This a group of five Adeptus Custodes - elite warriors who serve as the bodyguards of The Emperor in His Very Own Self!  And if you are going to work day-to-day around The Emperor, you better Look Like You Are Up For The Job! That means Big Armour, Guns Built Into Everything, and Lots of Capital Letters.  Because when you work for The Emperor, The Rules of Grammar Don't Apply...

While I have been enjoying my plunge into the Franco-Prussian War of 1870, it has been quite a few months since I have painted any 30k figures of any size.  I knew I had these particular figures sitting primed and ready to go since the summer of 2017 - they have been looming over all of the primed Franco-Prussian infantry figures at my painting pile/desk for months.  I recently reached a little pause in my Franco-Prussian project, so I thought these guys would be good for taking a bit of a break to paint some 30k stuff again before resuming my 1870 efforts.

In the 30k story, the Custodes almost never leave the Emperor's side. But when the Emperor sent the Space Wolves to bring the Thousand Sons to heel as punishment for violating his ban on use of psychic powers, he decided to boost them with some support from a group of elite Imperial troops, including members of the Adeptus Custodes. Their presence in the punitive expedition was the ultimate symbol of the Emperor's wrath...when the Custodes showed up, Magnus and the gang in the 15th Legion surely realized they were being set up for one heck of a beating...

Since the Custodes were part of the fighting on Prospero, GW included these models came as part of "The Burning of Prospero" box game released in 2016.  They are plastic multi-part figures, with options to arm them either with "Sentinel Blades" (big Sword) or "Guardian Spears" (big pole arms).  You can also create an officer, a Shield Captain (I think) and a standard bearer.  The Custodes join the Space Wolves and the Sisters of Silence as the "Loyalist" faction in the board game.


These figures are really something else. The armour is incredibly ornate, with all sorts of Imperium-themed iconography.  They are quite large figures, a little bigger even than the current Terminator models, and certainly look the part of warriors who would work directly with The Emperor.  In the stories they dispatch Legion Space Marines - the toughest warriors humanity is said to muster - with relative ease.  The Custodes are a cut above even the legendary Space Marines!  As the Emperor's guards, they have access to flashy armour and advanced technology and weapons from "old night".  These figures really look the part.

It is interesting to look back to the era of "Rogue Trader" and compare the original images we see of the Custodes in the pages of that venerable rule book to these current plastic models.  The new plastics certainly match the scale creep, I suppose!

The weapons on these current figures in particular are whacky in a charming and bizarre 30k way.  Who would turn a halberd into a power weapon, and then integrate a bolt gun into it? Why, the Emperor, of course! Even the big swords have firearms built into them.  It's all very silly, but very fun.  I love the "Guardian Spear" in particular - just looks bonkers.

I started painting the models from the Prospero Box last summer.  There are 47 figures in the box, and once I got started on them in June of last year I managed to power through 42 of them - finishing the Wolves, the Thousand Sons, and the Silent Sisters. These five Custodes models last in the line.  I had just finished the Sister of Silence last July, when Jamie M chimed in with this quip in the comments:

Of course Jaimie was having some fun, but it rang a little true...I just couldn't bring myself to dive into painting the Custodes at the time.  I figured I would "take a break", paint other stuff, and come back to them, but just didn't for whatever reason.  The "break" went on and on, extending to months... Jaimie's snarky comment was always in the back of my head. When I decided it was time to get back to a bit of 30k, I knew which figures I would tackle first!

The painting was pretty simple - 90% of model comes down to the armour, and as you can see, my paint scheme is not very original, generally resembling all of the other ones out there.  But hey - to me, it makes sense that these guys would be covered in gold from head-to-toe - after all, they work with The Emperor!  I used GW "Retributor Armour" as the base, followed with a wash of "Reikland Flesh Shade", a further targeted pin-wash of "Agrax Earth Shade", and a final specialized target wash of "Nuln Oil".  It was then dry-brushed with "Auric Armour Gold" and then - very lightly - with "Stormhost Silver".  Hopefully I can remember that in the event I try to paint more of these in the future...

The Propsero board game itself is excellent.  The rules are simple and fun.  The Thousand Sons have powerful psychic abilities, which the Loyalist player can counter with careful use of the Silent Sisters (and a little luck).  As is often the case, the combat system contains within it an approach that is more fun, flexible and innovative than GW ever seems willing to try on its mainline rules.  The game uses D6, D8 and D10s in a fashion that I believe evokes classic systems like "Stargrunt", and works very well.  The board sections are high quality and very well done, making a game easy and fun to set up on a kitchen table.

I hope we can try the Prospero board game for kicks - certainly these models were not assembled to match a particular type of unit, but rather have some variety in the Prospero board game. But as we are fortunate to be able to play on our own tables with terrain etc. I do hope to try some "Burning of Prospero"-themed 30k games as well.  I think these Custodes figures will also come in handy for "Siege of Terra" games, perhaps joining some of Mike F's incredible Imperial Fists, making a last stand near that awesome collapsed wall he made...
Posted by Greg B at 2:31 PM 8 comments: