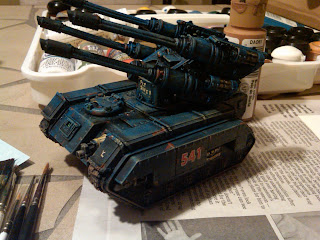 The Conscripts are not shy of flyer models for 25-28mm scale - for moderns, we have a Hind helicopter and a Tornado fighter. For SpaceKrieg there is the devestating FuturKom flyer. For WW2, I think there is a Spitfire, Me-109, Yak and some French fighter too.

The flyers are not often seen at our 40k games, however. Dave V's awesome Eldar Nightwing fighter is really the only mainline 40k flyer to have seen action on our gaming tables. The 40k flyer models are tricky to build, hard to mount and expensive to get in the first place. There is already a lot of other stuff to pack into a 1000 point or 1500 point game, so we can generally get by without it.

But with our group, escalation is always a threat (which is great, because it makes us collect more stuff). With the recent appearance of the Da Red Barun, my 40k Rogue Trader Guard will now have to put up with what will surely be devestating, if potentially erratic, strafing runs. Who knows what Dallas will add next for his Tyranids or Nurgle renegades? The risk of fighter/bomber attack was getting too risky for my 40k Imperial Guard armoured column, so I reached into the old "what-was-I-thinking-when-I-ordered-this-crap-six-years-ago?" pile and threw together my Hydra AA tank.

Here are a few pictures, mixed with some editorial: 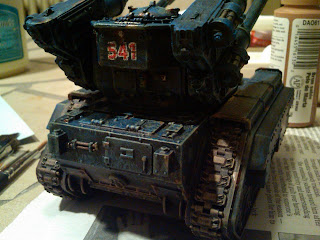 I have ranted before about Forge World "quality". This conversion kit - acquired at the same time as the alternate Basilisk gun shield - arrived in terrible condition. The cannons were warped, and I didn't think hot water was going to do the job. I also could not find a key part - the deck piece that would hold the turret! It had arrived with the kit, but somehow got lost when we moved to the new house four years ago. And so this went un-built. I figured I might just use the turret for an emplacement or something one day. 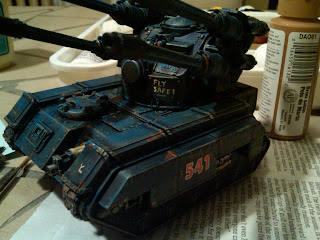 About a month ago, the missing piece suddenly turned up during a round of bits rummaging. I was back in business! I just had to figure out the barrels...

Hot water was not doing the trick with the warped cannon barrels, so I had to step it up to the ole' hair dryer. Lucky for me Linda doesn't even flinch when I ask "Where is your hair dryer?" while holding a model kit. I managed to mostly straighten out the damn guns, and I was set.

Or not. Even after all that the frustration was only just starting. Lucky for me I found some curses that seemed to help the superglue hold even stronger. The pieces barely fit the Chimera model kit. There is a narrow but long gap on the decking that I managed to mostly cover only with the help of the track guards, but you can still see part of it...hopefully the dark colours will mostly mask it.

The frustration extended to the painting phase. With the Forge World resin models, I use two coats as a base - Tremclad primer, and then Krylon flat black. I'm not sure what went wrong, but on the resin deck piece, the primer stuck fine, but the Krylon sort of krinkled, like a lizard's skin. I mitigated this with "strategic" dryburshing, and most of this happened on the deck piece, which is covered by the big quad gun turret, so fortunately it is not much of an issue. 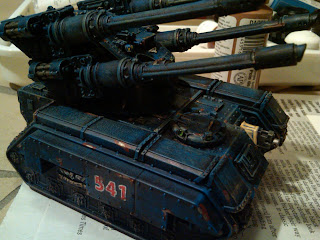 The new tank received the blue coat, decals and weathering/rusting last night. Now my Imperial Guardsmen can get a bit of cover from air attack. Also, like all AA tanks, the Hydra looks to be great fun against ground targets too. As a newly painted miniature, it will be doomed in its first game, but after that I hope it will claim many enemy flyers - not mention chewing up a few Tyranids on the ground!

With this, my Imperial Guard revamp is pretty close to done. I think I will update the decals on my "blue" Valkyrie, and may edit a few other things on some models before putting these guys down for now, but it's been fun to revamp some old stuff and finish some way, way overdue pending projects.
Posted by Greg B at 8:41 AM

With all of your trials and tribulations you still did a spectacular job on that model, Greg. Frankly, I suspect the slightly curved barrels will allow better deflection shooting. Praise be to partners equipped with ersatz modeling tools! (I gotta find a use for Sarah's hair straightener some day...)

Nice job Greg. Production has certainly been brisk so far in 2011 chez Burch!

Well done, Greg. Especially with such an old model - FW had such bad quality control in those days.

Maybe I should dust off that unbuilt Eldar Void Dragon Phoenix bomber I have...

I love the "Fly Safe!" painted on the front of the turret. :)

Great looking tank! I'm a big fan of the Hydra - if GW was to do it in plastic I'd probably invest in a couple of them. Lovely paintjob there :)