Battle of the Neptunes 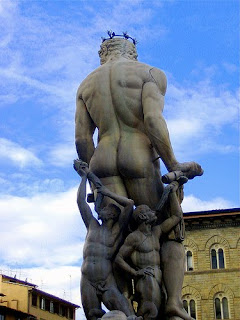 As the battle of Trafalgar is still raging, the French Neptune along with the Spanish Neptuno are trying to escape to a nearby Spanish port. But the British Neptune is on their heels... Yes, there were three ships named Neptune at the Battle of Trafalgar, one per nation. I decided to pitch them against one another to playtest Kiss Me Hardy!, a set of naval rules by Too Fat Lardies set in the Napoloenic era. Captain Stacy commanded the British squadron while Capitaine Coeurte was in charge of leading the allied crews to the safety of the nearest port brothel. 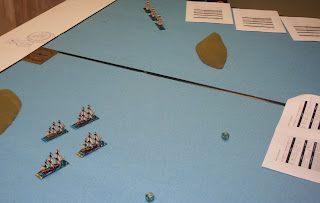 Here is the initial deployment. The allied squadron of 4 ships is trying to escape in the upper right corner. The British squadron, led by the Neptune, is coming from the upper left corner.

The British captain must have blinked! How come the allies are already passed the island? In KMH, speed is determined by adding the roll of a die (or two, depending on the attitude to the wind) to the basic movement allowance. The British had a few poor rolls at the beginning. But Captain Stacy quickly ordered the crew to start paddling from the gun ports in order to catch up.

Concentrating their fire on the rigging of the Santa Ana, the three Royal Navy ships got her to slow down and eventually stop. She stroke her color soon after. The British were able to catch the Neptuno, seen just on the corner of the table, and a small boarding party quickly subdued a much larger crew, thanks to pro-British modifiers. The French sailors, by that time, were already enjoying wine with pretty Hispanic damsels at the port brothel.

I made many interpretation mistakes in the first few turns of the game (thanks guys for your patience), but after re-reading the rules on the go and coercing players into performing specific actions in order to test special rules, I found that KMH plays quite well. Ships squadrons are moved and fired using cards drawn one at a time from a deck. It brings lots of fun in a turn. But I have to say that from a "realistic" point of view, it sometime felt a little awkward. My vision of sailing ships combat is that you see the enemy ship slowly and inevitably approaching yours for a sudden and terrifying exchange of broadsides. In KMH, the range of guns goes in increments of about 7 cm and the movement of a third rate ship in the best attitude to the wind can be as short as 14 cm or as long as 24 cm. Depending on how the cards are drawn and how good the wind rolls are, a ship pursuing another one could either come to close range or find herself at extreme range. On the other hand, the damage system makes each ship unique: the number of "damage points" is based on the number of guns. A 74 gun ships has 74 DPs. Again, to be the devil's advocate, I have to say that, historically, the French 120 class ships were bigger than a Spanish 136 guns. I would like that to be reflected in the rules. No fire were started, which was a refreshing change from Trafalgar. The critical hits table of the latter was probably designed by a pyromaniac. For turn gages, circles of different radius are used. The bigger one, about 12 cm radius, could be tricky to use when there are lots of ships nearby.

I would like to play next the battle of the Hudson Bay with these rules to see how the Pélican would perform.
Posted by Sylvain at 8:28 AM

I look forward to reading about a re-fight of the Battle of Hudson Bay.