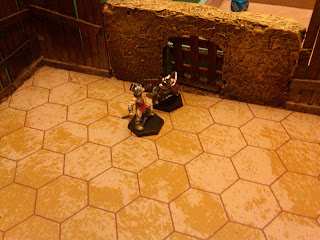 Last Thursday, Conscript Dave V. brought out a new game for us to play, "Ludus Gladiatorius" from EM-4.  This is the gladiator combat game with pre-painted metal 28mm gladiators and special combat dice. 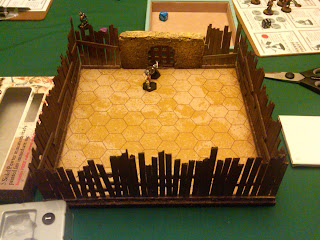 The game uses a hex-based movement system so we rolled out my "pit fighter" arena.  I made it several years ago from a piece of hex mat glued to a square of MDF, bordered by a rough-hewn balsa wall with a stone "gate".  I think it adds a "certain something" to the "provincial" gladiator games we play - that is, when we're not playing in Conscript Brian's amazing Colosseum arena.  I think we'll have to create a blog post dedicated to that awesome piece of terrain sometime! 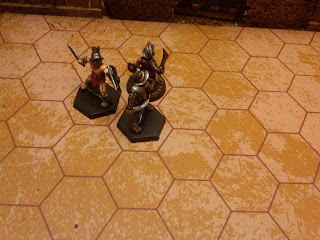 The EM-4 game was a lot of fun.  Basically, gladiators have a number of special attacks and defences and hit points which differ by gladiator type.  Some also move faster than others.  Combat is resolved by opposed die rolls, throwing special dice with "sword" or "shield" symbols.  The different gladiators throw different combinations of dice, which are added to or modified by special attacks or defences.  The objective for the attacking gladiator is to score more "swords" than the defender scores "shields" - the defender takes the difference as a number of hit points removed.  Once your gladiator is down to zero hit points, the match is lost and it's time to appeal to the crowd!

The game was pretty fast moving and was quite fun to play.  The only modification I might suggest to the rules would be something to reflect attacks from different facings.  As it is, it doesn't matter whether you attack an opponent from straight ahead or from behind - the same number of defence dice are rolled.  It might be interesting to try a variation where attacks from an advantageous spot roll a bonus die, or subtract a defence die.

In any case, I'd highly recommend the game, the miniatures were nicely painted and the components were good quality, and the price point (12GBP or so) is very attractive. 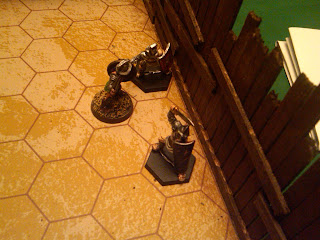 That looks like fun...how many gladiators come with the game?
Cheers
paul

I think 5. There is an "LG2" that has some different types (including retiarius) and a lion!

The two sets of gladiator miniatures as well as a close-up of the special die used can be seen at http://www.em4miniatures.com/acatalog/Gladiators.html

I´ll watch out for this...
Cheers
Paul

Death to Thrax! That bugger was cheating...

I just got back from a 4-day road trip for work. Thanks for writing this up, Dallas!

We went through a sort of A and B side series of one on one fights. Thrax, run by Dallas, was a tank, dishing out awesome damage and winning the event in the finals with only two mighty swings of his sword.

We then set up an 8-man free-for-all, a grand melée of sorts. It was interesting to see the battle ebb and flow, as various gladiators ganged up on wounded opponents. In the end, Brian's gladiator defeated my man after a long exchange of blows using identical dice.

I ordered the second set, and I intend to run another evening using the various new rules for net & trident, animals and campaign play.

RE: Facing:
I agree. I suggest the loss of one "ordinary" die if defending against an attack from the rear hex edge (the one opposite the front facing).

Hi everyone - Doug Cowie here. I enjoyed your write-up and I just thought I'd comment on your observation about facing.

I considered this when designing the game; if I'd had any pretensions to writing a simulation, I'd have included something. However, my intention was a very simple, fast-playing game, which made use of the miniatures. As you have demonstrated, facing rules can be added very easily and I'd always hoped players would modify and tweak as they saw fit.

Play it the way you enjoy it..!

Doug, thanks for dropping by.

I hear you. If I wanted to play more of a "simulation" of gladiator combat there's plenty of rules sets out there. I really like the playability of the special dice in your rules. Switching to all out offense or all out defense is accomplished with a quick change of dice. Very neat.

Awesome arena! I'm about to make my own, and I really like the look of this one. How was it done and does it break apart for storage?

Fantastic arena. I'm thinking about making one for my group. How was this one done? Does it break down for storage?

Hi Jeff. Just noticed your comment! The arena was made from a 12"x12" sheet of mdf. I had a small hex mat that I cut to size and glued down. The walls are made from balsa sticks glued to the sides of the mdf base and washed with brown ink for some texture. The stone "gate" is foam covered with wall putty and painted. The arena doesn't break down for storage but is pretty compact in size already. Cheers!