When I was a boyscout, among the marching songs we used to sing was Napoléon avait 500 soldats. You can hear it here (wait a few seconds for the song to start. Then take the time to click on Fanchon, composed by Lasalle after the battle of Marengo, or any of the other songs.) Anyway, that song has now become an ear worm as I start a new insane project: Project Pratzen.
In the British military history tradition, Waterloo appears as the ultimate Napoleonic battle. But in the French tradition, Austerlitz peaks among them all. In Paris, there is a train station named after it. During the "Bataille des trois empereurs", the Pratzen Plateau was defended by the Russians and Curt suggested that I build my army to recreate the action fought over there. 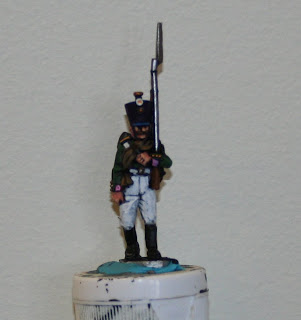 This is Ivan, the first painted Russian figurine, from the Smolensk Regiment (indicated by the pink cuffs and collar). Let's see what will be coming next:

As the song suggest, there is something like "500 soldats" in this project. The cavalry appears as a daunting task. Even in "challenge gear" it would take me 6 months. I will have to segment Project Pratzen into smaller ones. Anyway, I will start with the infantry then I will take a break with another project.
Posted by Sylvain at 10:38 AM

Awesome Sylvain. You should have it done in no time at all...

Awesome! What figures are you using? I know that Sash & Saber make some nice Russians at a pretty attractive price.

Ivan looks the business! Excellent work Sylvain. Dallas, these are new sculpts from your friend Paul Hicks (for Victrix).