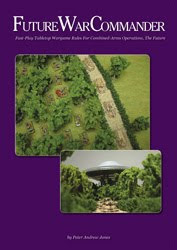 This week we're going to take "Future War Commander", the science fiction edition of Specialist Military Publishing's rules, out for a spin, using Epic 40k miniatures and a scenario set during the early days of the Horus Heresy, pitting Horus' followers against determined loyalists.

In the fluff of the Horus Heresy, there is a lot of focus on Horus' main battle fleet, which moved to Earth quickly after the rebellion started. But the fighting spread rapidly right across the Imperium, often within systems and even planets.

For the game this week we'll set the engagement on a world where an Imperial military expedition had been amassing, containing substantial forces from the Dark Angels and Emperor's Children chapters, as well as many Imperial Guard regiments. All the units have come to a garrison world in preparation to embark on the expeditionry fleet, when news of the rebellion reaches them. The Emeperor's Children, loyal to Horus, immediately set about trying to take control of the situation, with the ultimate goal of seizing control of the system and the expeditionary force so they can join the assault on Earth. The Dark Angels move desperately to counter them. Component elements of the expedition turn on each other as some of the Imperial Guard units join with the Emperor's Children, while others remain loyal to the Emperor. Fighting breaks out across the planet.

A particularly large column of rebel forces is moving on toward an important Imperial communications base. The small garrison remains loyal to the Emperor, but cannot hold for long. Critical Imperial artefacts, supplies and personnel are loaded on to transport vehicles for evactuation. Will Horus' minions sieze these critical objectives, or will the Dark Angels be able to intervene in time?

See you this Thursday!
Posted by Greg B at 8:58 AM