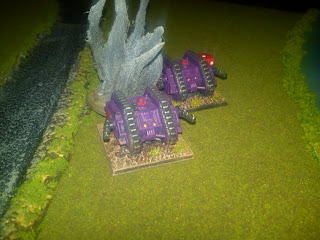 Last night we played a game set in the Horus Heresy, using Future War Commander rules and Epic figures. The scenario imagined the Horus Heresy was just under way, and forces of the Emeperor's Children, who have gone over to Horus, are attacking an Imperial base/industrial facility. The setup was derived from a canned scenario in the Future War Commander rulebook, in which colonists had to be evacuated. I didn't really think that suited the Imperium - civilians at risk? who cares? - so the premise was altered to crucial artefacts, materials and propaganda servitors needing to be evacuated as opposed to innocent colonists.

The Imperial loyalists had to escort the evacuated material, represented by four "Valiant" APCs from Dark Realm Miniatures, the long way across the table. The escort force was comprised of Imperial guardsmen backed by a Baneblade, a squadron of Leman Russ tanks and some Chimeras as well as a bit of orbital artillery. A small detachment of Dark Angels riding in a Thunderhawk was on hand to assist. Blocking them were an elite force of traitor marines, with Rhino APCs, Predators, Land Raiders and dreadnoughts in support. They had a Thunderhawk too, and it would prove decisive.

Dallas and Frederick took command of the Loyalists, while Dave V and Mike F rolled with Horus' boys. Unfortunately I only have these few pictures, but hopefully Dallas can add a couple more. One shows the full scope of the table, and the other shows the Traitor Marines deployed to block a bridge. 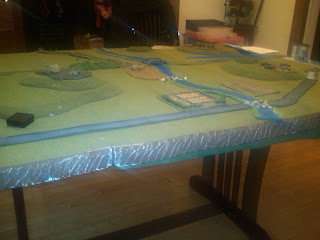 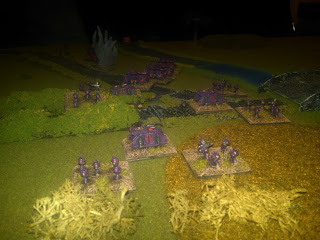 The Loyalists had 12 turns to get from one short table edge to the other, but it did not work out for them. Dave V and Mike F were well served by their recon unit and their Thunderhawk, which devestated the "potatoes". I have to say the APCs had really wimpy stats, much weaker than I had assumed (saved on a "6" - ouch). When I try this scenario again in the future, I will toughen them up significantly, or, even better, mandate that the blocking force has to capture them somehow instead of just shooting them to pieces.

All the same, Frederick and Dallas gave a good account for the Imperial side, even if the command dice were not with them (artillery strike missed, Baneblade was late to the party, etc). The traitors went home a little lighter in the Predator department. I think Dallas and Frederick would have also tried some other tactics if they had known more about the rules - easy to see with hindsight.

So the scenario was a bit tough. But I really enjoyed the game. Whereas Cold War Commander is lukewarm at best in my opinion(Spearhead is much more fun), Future War Commander does an excellent job of capturing the feel/fluff of the 40k setting. The folks at Specialist Military Publishing have managed to make a solid adoption of the Warmaster rules concepts to a shooting/vehicle environment.

The Marines are really, really tough because their command ratings are very high. A small detachment of them can run rings around opponents, or unleash round after round of devestating fire. The Thunderhawk in particular is a very, very tough customer, and players have the option of using as an airstrike, or as a gunship on the table. The Imperial Guard, meanwhile, are numerous, and can shoot a lot, but are more difficult to get around the table because their command structure is not as elite.

So full marks to Future War Commander! I look forward to playing the rules again soon. Thanks as always to Dallas for hosting, and to everyone who came out for the game!
Posted by Greg B at 2:23 PM

I like the look of the modernised purple MK V´s.
Cheers
Paul

I agree with you, Epic+FWC is a great combination. I also thought about doing some pre Heresy campaign but got distracted with other toys :(
If interested, you can see some Epic+FWC AARs in my blog here: http://javieratwar.blogspot.com/search/label/Battle%20Reports.%20Future%20War%20Commander