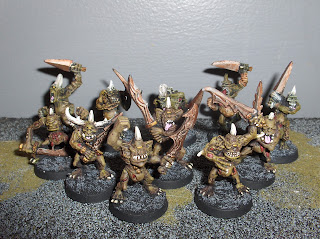 Inspired by Conscript Greg's efforts on tuning up his Imperial Guard, last weekend I embarked upon a mini-project to repaint some of my Nurgle Chaos Space Marines.  Most of these models have been in service for a long time - Conscript Sean will recall the "Big Score" at the PrairieCon auction almost 10 years ago where I obtained many of these models packed into a box and a yogourt container (!) for a sum of money so ridiculously low that you might not believe it.  But that was not atypical for me and Sean ;-)

The army started out as a Chaos Undivided force in Black Legion colours - black armour with gold trim.  Soon some more Plague Marines joined the crew and most of the plastic CSM were sold off when I chose to go with a Nurgle theme for the entire army.  I diligently painted the models in a bright green scheme but was never quite happy with how they turned out - they seemed a bit too "clean" for Nurgle lads.  So I had this bright idea to redo the colours in a more putrescent theme - baby sh!t brown - that better suits the corrupted, putrid look we all adore in the children of our favourite Chaos god...

Great stuff! I particularly like the 'Blight Drone'. You know you have a loving and sympathetic partner when they buy you something as f*cked up as this for a Christmas gift.

You are the Da Vinci of sick colors.

Nice army. I repainted a bunch of models, stripped them, others I just touched up, it was like a half decade slog.

I'll never strip that many models again. Any hobby project I take on seems to become a life and death struggle, well maybe not that bad, but a LOT of effort.

I wholeheartedly agree... in fact, I should've made clear that I didn't strip and repaint every model - I just overpainted the bright green with the pukey brown colour, and on the vehicles, also did some more detailing and weathering. I'm not sure I would have undertaken it if it was to be a wholesale strip and repaint. In fact I'll update the post with a before/after photo.

I did the Before and After thing, that's how long I know it took. One model that I stripped and planned to repaint still isn't done. One Model! Of course over the years I added more Plaguemarines and Plaguebearers too. I'm hoping to do more non-Nurgle stuff, when I pick up the brushes again.

I made this my link of the moment and here is my before and after gallery: