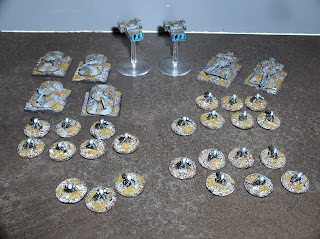 One thing about our group of gamers, is the variety and insanity of the multitudinous projects we're all working on.  Back in November, Greg sprang 6mm skirmish gaming on us, and it looked so cool I had to jump in with a force (one hesitates to call 30-odd 6mm models an "army") of my own. 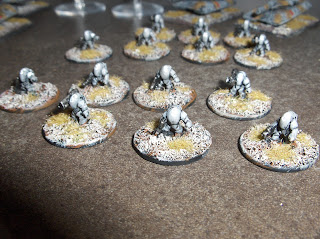 My infantry consists of 24 power armoured suits, organized into three sections of seven, and a three-man command section. The power armour troops are the very Ma.K.-like  castings available from Brigade Models. Incidentally, I hear tell that these models may be available in 15mm in the not-too-distant future... if so, I am down to clown like Charlie Brown ;-) 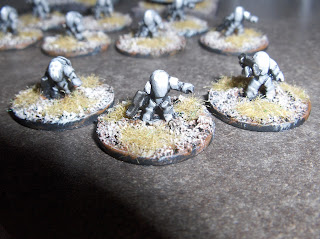 This is the command section, distinguished by the "skull" motif painted on their armour. A stripe on each arm indicates Lieutenant rank and platoon command. Right-arm stripe distinguishes NCOs in the command element, while squad leaders have a stripe on their left arms. 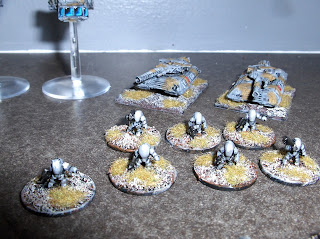 Sections are designated by letter; this platoon consists of "K", "R" and "S" sections, names for the first initial of the squad leader. 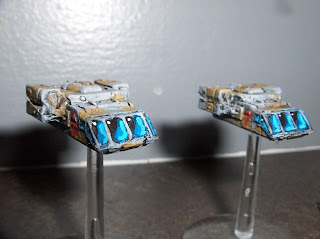 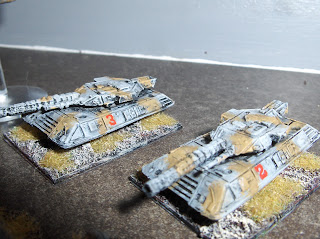 Heavy support grav tanks from GZG as well. The grav vehicles in the force are supported on their bases by small metal pieces from Brigade Models. 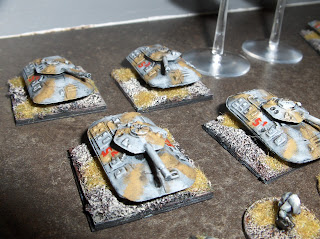 Medium grav tanks also from GZG. I have to say that I was not terrifically impressed by the quality of the GZG casts I received. The heavy tanks and flyers especially suffered from heavy flash and indistinct detail in places. The flyers in particular looked like they had been pulled from damaged moulds, as the areas around the engines was pretty messed up. I fixed them as best as I could with paint. 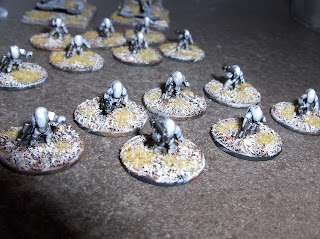 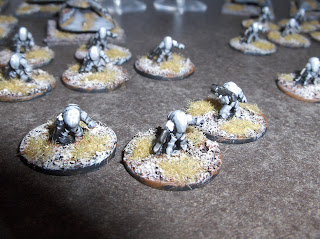 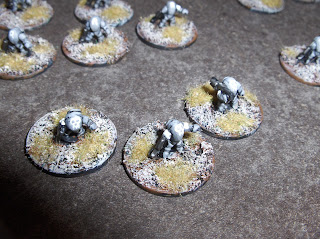 Pretty difficult to get the paint details to photograph in 6mm! Anyway, I'm looking forward to getting these guys on the table. I imagine that they're a mercenary force, as there is no national or corporate insignia on the vehicles or suits. The platoon is lead by Leutnant Ziegler and is currently under contract to 769855 Terra Inc., a numbered company subsidiary of ZaxxonMobil Corp. Perhaps ZaxxonMobil also has an interest in the geological activities underway on Colony 24601? Only time will tell...
Posted by Dallas at 9:31 PM

Great stuff Dallas! Love to see the insanity spread. The GZG stuff looks like it turned out fine...

Nice job! The color scheme is striking. BTW: ZaxxonMobil is cleaning up here in SoCal!

Yay more 6mm FUBAR genius.
How did you do the numbers on the tanks, pen?

Those are pretty darn cool...