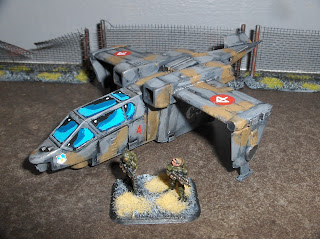 We've been on a bit of a tear lately with blog posts so here's another one :-)  I recently completed this 15mm VTOL from Old Crow, painted as part of my Earth Force army. The model is a multi-part resin and white metal affair and while its construction was mostly straightforward, there were a few bumps - mainly due to my own issues! 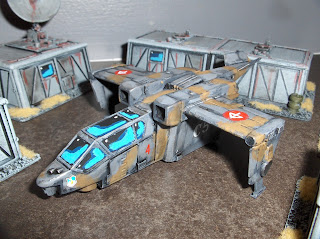 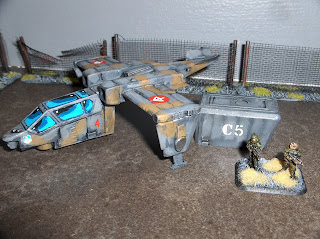 The first issue in assembling the model was how to deal with the cargo pod. It could have been permanently affixed in place, but that would be the coward's way out... the courageous (and cheapskate) way would be to rig up magnets to hold the pod, while allowing it to be removed for use as an objective or terrain item! So this is what I did, drilling into both pieces and sinking in small rare-earth magnets. 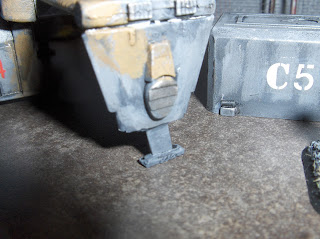 The second issue was not of my making... this was a problem with the design of the model. As it came, the "foot" seen above was part of the vertical fin casting. All very well, but in order to make the model sit "level" with the front foot (underneath the cockpit) it was necessary to carefully cut off the feet on each wing and interpose a small spacer. I did this with plasticard... and it was a bit of a pain. But now it's done and I'm glad. 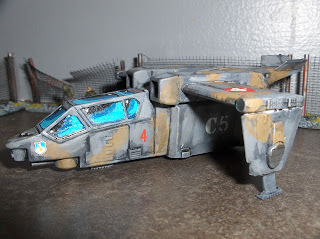 The model was painted in my standard Earth Force scheme of Codex Grey and Graveyard Earth, with decals poached from the decal folder. All in all a worthwhile model and a good addtion to the 15mm sci-fi arsenal.
Posted by Dallas at 5:21 PM

It looks really nice! The extra work clearly paid off. I especially like how you've painted the cockpit windows.

Great stuff Dallas. Will be a great objective/participant in our 15mm games.

That looks great, I have the 28mm version and I have to say that you can't tell the difference looking at these photos, detail's great. Didn't have the problem with the legs on the larger one, so that must be specific to the 15mm. happy gaming with it!

I love how you have done the windows and this matches your GZG building! Inspiration for sure :) when i have to do mine :)

BTW when I put my one together (have another two to do) I didn't have the issue you did with the wing and feet but only difference I can see is that your wings are level where mind were slightly more cantered down at the ends.

When I get the chance ill see if can dig it out and have a look:)