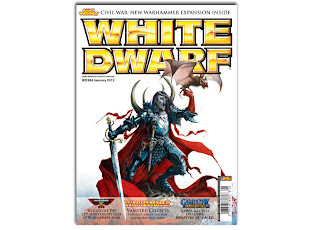 Needing to get some Citadel paint last weekend, I stopped at my local. I'd also recalled that Conscript Mike A. had mentioned that the new Vampire Counts book is about to be released for Warhammer Fantasy. So being as I have a VC army I thought I would pick up the WD as I haven't read one for a couple years.

So what's the verdict on the Dwarf this month? A solid "meh"... with added pretty pictures. Let me explain. the focus this month is solidly on Vampire Counts and I liked that. However, the content appears to be largely lifted from the forthcoming army book, with excerpts of model statistics, some background fluff, and model pictures. I liked the photos and descriptions of the new VC models (Coven Throne/Mortis Engine, Vargheists/Crypt Horrors, Black Knights/Hexwraiths) and I applaud GW for creating unit boxes that include the option of building more than one type of unit - this actually helps soothe the intense pain of their pricing by giving extra value in the form of spare bits. But I was really irritated by the fact that the New Releases section didn't list any prices for the new models?!?!? Yes, I know I could guess that "they're expensive" but it irks me to pay $10 for what is essentially a catalog, and have to go on the website to see the prices... in typical GW fashion, the pictures of the models are as mouth-watering as the prices are eye-watering!

Other than the VC stuff there was a Necron tactics article. Although I briefly had a Necron army a few years ago, most of the content in the article went straight over my head as the units in the army are mostly all different to what I remember.

Jervis Johnson's "Standard Bearer" article was pretty good. It was basically an apologia about why Jervis loses games when he designed the game system. The idea is that as a designer, you have an idea in your head about how things "should" work and you write the rules accordingly. As a player you take the rules as immutable and try to exploit them as best you can. Jervis says that it doesn't occur to him to do this because as he plays, he's thinking more about game design than winning. Fair enough! I just want an excuse that I can use when I don't win.

So all in all the mag was "OK" but not great. As far as the VC content went I would have liked to see a rundown on what and what isn't new in terms of units and troops. For example, I have no idea how usable my old army is in the new book. Are there still Fell Bats units? How about a Black Coach? (apparently they're both still around but I wouldn't have known this from the mag). The 40K content was super-focused on Necrons and nothing else... of no interest if you're not a Necron player or nerdy tourney-type who fights 'em. However I am looking forward to next month's rag which is hyped to be a "celebration of the 25th anniversary of Warhammer 40,000"... and with our group's enthusiasm for Rogue Trader I am hoping there will be some good stuff there.

Rumor has it that there will be a 25th anniversary 40K model released next month, though it will only be available for one weekend. I agree with the review on this mag. A big solid MEH...
Oh, as an aside, the guy that wrote both the Necron article, and the codex is far worse than Gav ever was.

I count ONE, ONE Sucker born every minute!!