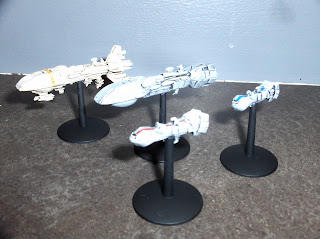 Trying to keep up the blog routine, thought I would post some recently completed models given to me for Christmas by my wife! These are some "fleet-scale" (1:10,000) resin Star Wars ship models from Odyssey Slipways. Left to right, these are the Rebel assault Frigate, Imperial Dreadnaught, and Carrack cruisers. 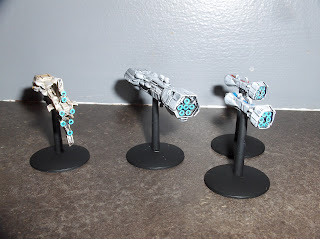 I painted the ships using a black undercoat and for the Imperial ships, a basecoat of Codex Grey highlighted with Fortress Grey, a Badab Black wash, and re-highlight of Fortress Grey followed by a light drybrush of Fortress mixed with Skull White. The Rebel ship was basecoated Graveyard Earth and highlighted Bleached Bone mixed with Graveyard, washed with Devlan Mud and re-highlighted. Engines were painted Ice Blue. 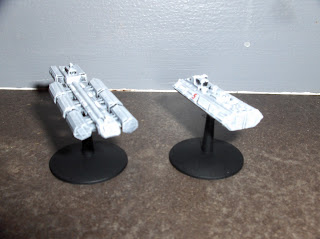 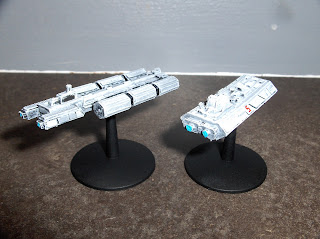 These are some generic metal cargo freighters I picked up from Brigade Models as a tag-along to a small order of 6mm stuff. They will be used as civilian or transport craft in our games. They were painted similar to the Imperial ships. 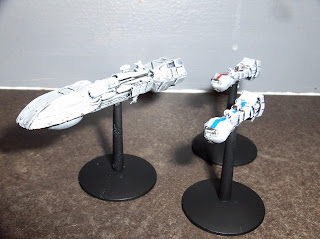 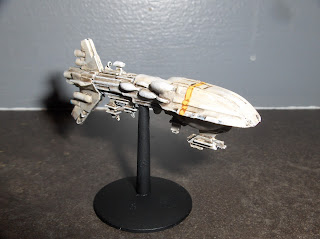 I really enjoy Odyssey's range of resin Star Wars ships. They are easy to assemble and don't require a lot of clean up, and of course, are a snap to paint with ample surface detail. I look forward to gaming with them in the near future!
Posted by Dallas at 1:44 PM

These look great, didn't know they even existed, thanks for the heads up.

One "Nebulon B" frigate will kill all of these ships....

Glad you like them! Nice paint jobs by the way.

have you seen the postings for the Bulk Cruiser that will be getting released sometime soon?