Following Conscript Greg's lead , here's a FuturKom Strike Force for Tomorrow's War, as an entry to the Strike Force contest. 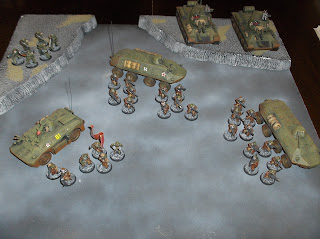 As we all know, the far future is not a nice place. In our own twisted time-to-come, "FuturKom" is the dystopian future society that mirrors the former Soviet empire of our own time. Strangely, so many people (myself included) are quite taken with the notion of a future empire that reflects the former USSR... do we all conveniently forget that the real USSR only lasted 70 years or so before collapsing under its own weight? In any event, the future world of "50-Year Plans" and "Socialist Workers' Paradises" has to be defended, and the FuturKom Socialist Army of Workers and Space Peasants fulfills that important role. 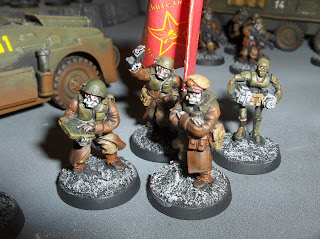 Major Markov commands the strike force, part of the 356th Guards Army of the Dnieper-System Front. He is accompanied by his ADC, the standard bearer, and a supply bot. (Models by Pig Iron, flag from Vaubanner Graphics. 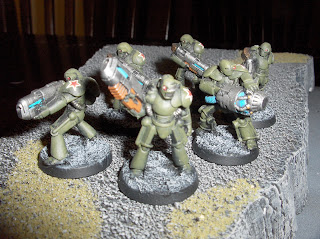 Although the FuturKom forces largely consist of conscripts, there are elite elements too - like these power-armoured recon troops, the "FuturKommandoes". 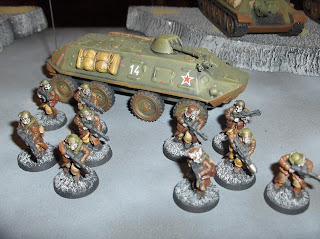 As a "quick reaction force", these two FuturKom fireteams enjoy riding to battle in their BTR-600 APC. Troops from Pig Iron, APC is a Russian "toy-scale" BTR with conversions. 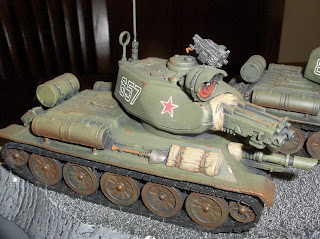 The heavy punch of the strike force is provided by a pair of T-340 medium tanks, armed with twin autocannons in the turret and a hull-mounted "laser projektor". Note the ubiquitous searchlights provided to all future forces by "Future Industrie Gmbh", aka Games Workshop from their tank accessory sprue. Model is another toy-scale Russian diecast.

So that's the strike force, but while I had the models out to photograph I couldn't help but snap a few shots of the rest of the FuturKom army I've accumulated. Here they are... 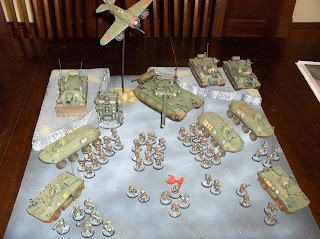 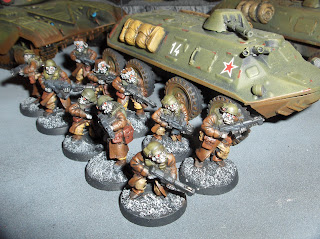 So there you go - "Onward to the glorious future-Kommulist future - FUTURKOM!"
Posted by Dallas at 5:55 PM

Always great to see these guys dude. We have to get that T-640 on the table soon.

Great looking force, very nice all around, rock on.