Sometimes you need to sure something will get put down. With that in mind, we have a really heavy duty sniper team from Pig Iron Productions' System Trooper line.  The team has two figures, a spotter and a sniper sporting the sci-fi power armoured version of a Barrett Sniper Rifle.
Why do power armoured troopers need a sniper rifle? Who knows? But if power armoured troops are going to need to snipe things, you might as well have a very heavy looking sniper rifle, and Pig Iron delivers on this score.  The trooper holding the sniper rifle is a large casting, and it would not fit on a normal 25mm base so I mounted it on a larger 30mm one.

The models are also wearing camouflage cloaks.  I made a bit of an effort to match the camp pattern to the colours of the groundwork I've been using on the Gün Schwarm bases.  I think the results were a bit mixed, but it still turned out OK.
Maybe the only drawback of these figures is the lack of separate heads - the only System Trooper models without the separate heads.  So I couldn't match the helmets to the "Kolony Inner Guard" ones I used on my other Gün Schwarm power armoured troops. Looking at the castings, though, I'm not sure how sculpting the separate heads would have worked out.  Also, the helmet is mostly covered, so the difference does not stand out too badly. 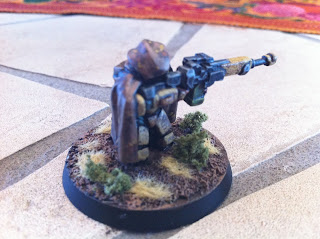 I really enjoy the heavy duty look of the rifle on this model, and I can easily see them putting a heavy calibre futuristic anti-everything round through all sorts of FuturKom stuff, including the driver plates on APCs (a virtual certainty if Mike F is rolling to hit).  I'm continuing to add more power armoured troops, and hopefully they will be ready for a confrontation with FuturKom (and their mercenary allies?) on the table soon.

I have faith in reinforced iridium armour... ;-)