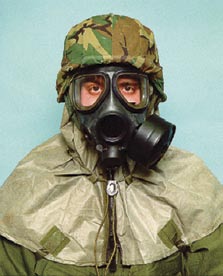 In accordance with ancient custom, once more this year I hosted a New Year's Day game. This year we went with tried and tested themes - World War III and zombies. The (admittedly thin) backstory is that World War III started in 1985, and the ensuing nuclear, biological and chemical exchange has created "chem-zombies" - lurching, half-dissolved horrors that crave nought but the flesh of the living. 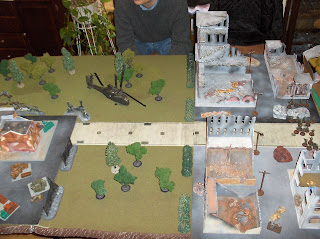 Into this fairly bleak setting, behind Soviet lines, we drop a downed Blackhawk helicopter bearing some secret item (upper centre of photo), which the Americans (centre at right) must recover or die in the attempt. Add chem zombies, and Robert's your mother's brother, you have a game.


Scattered liberally around the table were chem zombie spawning points, represented by Eureka's excellent barrels-with-zombies models. These barrels became known as "fun sauce" containers for obvious reasons.
Since this is essentially a skirmish game, we use a tried-and-tested variant of our favourite simple skirmish set, GW's "Lord of the Rings". It gives a straightforward, fun game, and with the state of some of the boys' noggins on New Year's Day, we like to keep it simple. 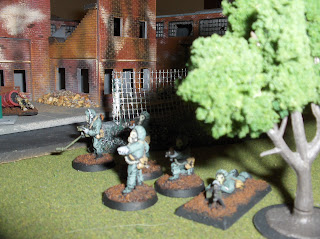 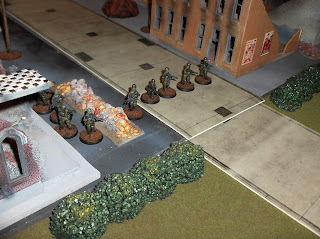 All of the models used in the game were sculpted by Kosta Herastinides for Eureka Miniatures. We used his excellent zombies, Soviets in NBC gear, and my newly-painted US infantry in MOPP suits. 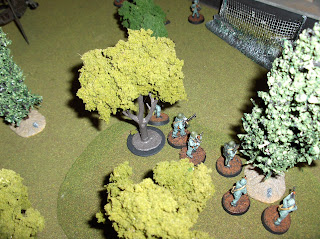 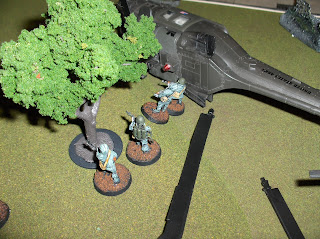 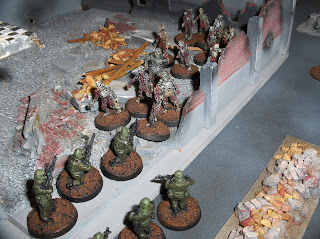 As it turned out, the Americans failed to achieve their objective, so the nude photos of Nancy Reagan or whatever was so important in the Blackhawk remained unrecovered. But we had a fun time all the same.
I owe special thanks to my wife Pam for whipping up a spectacular German lunch for us, and to Conscripts Mike A. and Dave V. for bringing snacks.  Thanks lads!
Posted by Dallas at 8:08 PM

The food and the game were awesome - many thanks Dallas.

Its all about the flank attack y'know... Wish I could have made it out - looks like it was a great time! Nice to see your new MOPP Suits out on for a stroll. Love the Oil Drum Bursting Zombies!

Looka like it was a great game. Thanks for the pics and the quick report. I'm interested that you used a modified form of LOTR. I've toyed with that idea myself a few times but never really put it into practice.