More war machines for the Swordwind

I am glad to be posting again after a forced hiatus of a few months. All I shall say about that is a quote from the great movie The Princess Bride,

Here's a couple of very recent additions to my ever-expanding Eldar force for Warhammer 40,000.

I played at the Mechani-Kon III tournament back last October, where I fielded one of GW's old metal Wraithlord models. At the time, Conscript BrianH opined that it would be cool if I had one of the newer plastic Wraithlords. As it happened, I had one of those kits kicking around unbuilt. 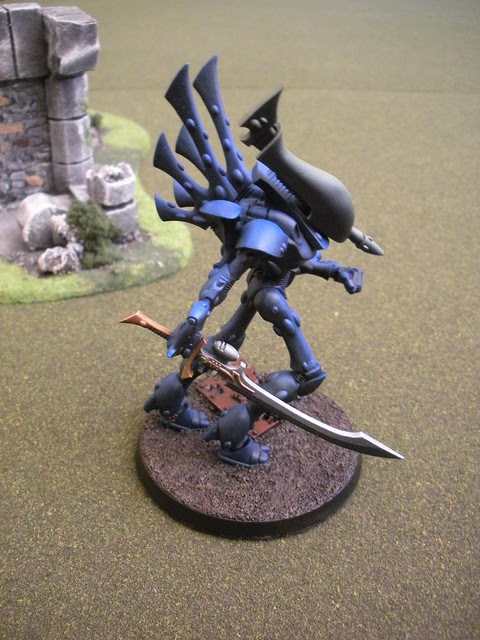 I like the willowy look of the plastic model. There is a choice of four different feet (flat and bent), but only two legs. Cut apart the originally straight right leg, bent it at the knee, and rebuilt it with epoxy putty and thin jewelry wire (for the joint covering on the back of the knee). Repositioned the gun to the middle of its "face" to make it look like one of the old Ghostwarriors.

The bending of the right leg, along with appropriate positioning of the torso and other limbs, adds a sense of motion and power to the figure. 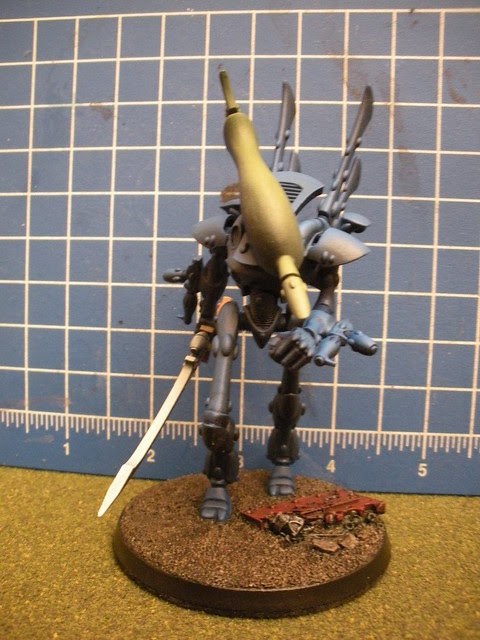 The photos below shows detail, repectively, of the Wraithsword and the rune on the chassis rear. 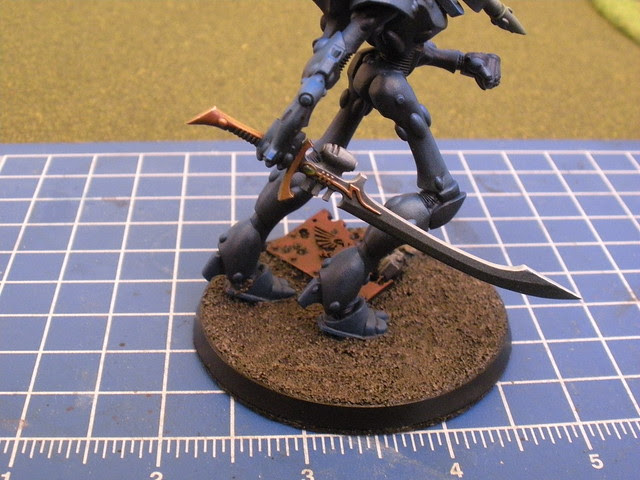 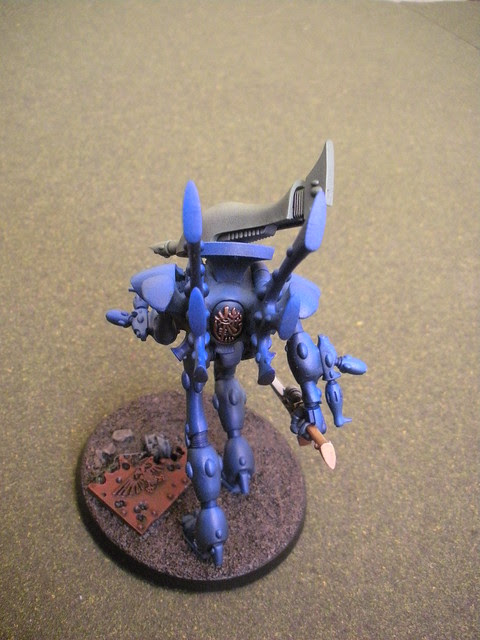 The IED at the Wraithlord's feet is a Forge World resin bit. 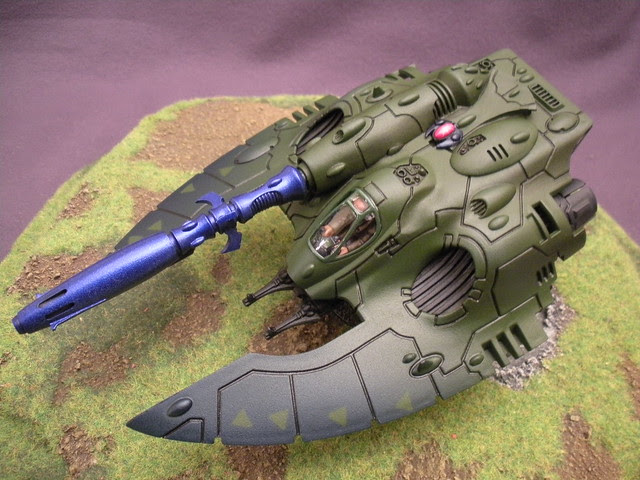 This resin and plastic model makes me think of an Eldar take on the Sturmgeschütz. The big gun is a Distortion Cannon, a reality-rending device whose rules describe it as capable of firing a large blast barrage up to 36" away, or a more focused template (called an Aether Rift) to winkle out infantry in cover. 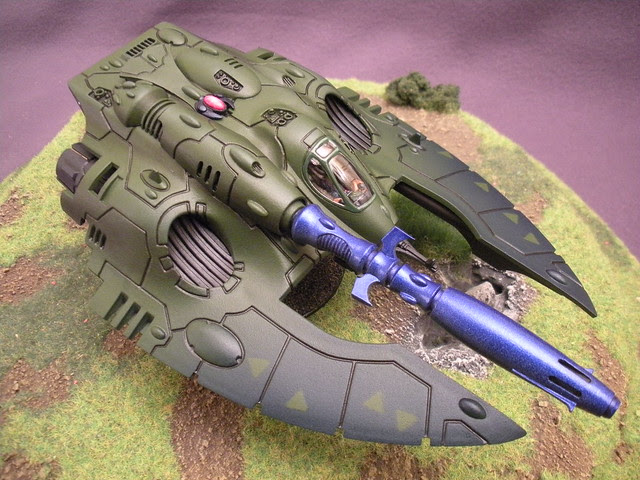 The photo below shows the pilot detailing. 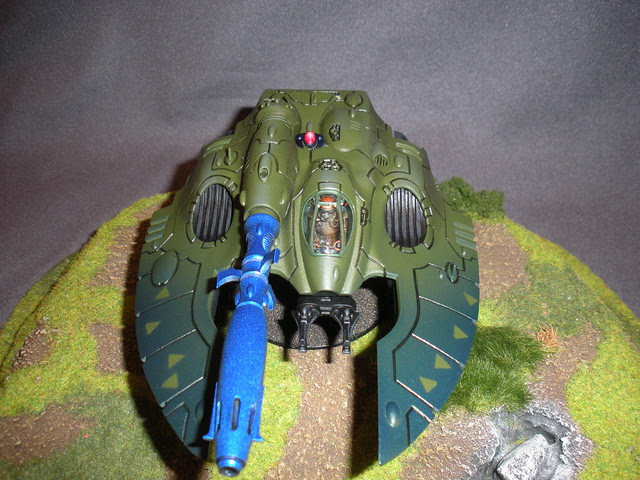 The large gem on the hull painted as a star ruby. 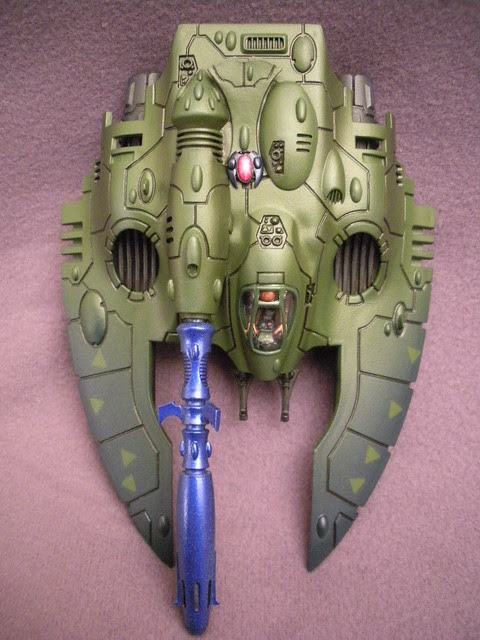 I finished the Warp Hunter just in time for 40Kegger III, an annual local tournament with unique beer-themed missions that take players through a full day of intense 40k action, with the welcome addition of kegs of local beer for refreshment.

Ah, drinking and gaming. Sounds just like a Thursday night!

40Kegger specifies only 1,000-point armies, to allow for several fast games. At that point level, there's no room for fat.

The list has some long- and short-range anti-tank, some templates and a barrage to deal with infantry in cover and hordes, and has a fair amount of medium strength firepower for infantry, monstrous creatures, and light armour. It can reserve itself and has a good chance of coming onto the table cohesively instead of piecemeal.

Still and all, I found it a bit of a challenge to create a balanced list. Codex: Eldar is an older publication (almost 6 years old, now), and is no longer very popular among the tournament crowd.

As it turns out, when I played at 40Kegger yesterday it was the third tournament within the last year where I was the only person present playing Eldar...

Both look amazing, as per usual. I look forward to seeing them on the table soon.

Beautiful stuff as always Dave. I really like the little feature on the Wraithlord's base.

Greg, IIRC the IED is from a limited run Forge World pack of traps. Here, a Marine helmet is wired to a melta bomb and a grenade.