Ju-87 with 37mm AT - ready to wreck some sh*t.
Last night we assembled at Dallas' place for a game of WW2 Spearhead. The scenario was based on an article from an old copy of Gloire, pitting a German heavy tank battalion against a Russian tank brigade loaded for bear with JS-2 heavy tanks. The scenario was set for Command Decision, but I fiddled with it and set it up for Spearhead. A clash of the heavy tanks - should be good stuff...

The scenario was a basic breakthrough, set in early 1945 in Eastern Poland. The hapless 9th army, watching its supply corridors get overrun, decides to protect at least one of them by committing the 502nd HeavyPanzer Battalion, freshly equipped with some new Tiger II tanks, against the Soviet Spearhead.

Dallas and Brian rolled with the Germans, while Bill, Mike F and Wes went forward for the proleteriat.

The terrain was covered in swamps and forests, and if that wasn't good enough, all the clear ground was treated as rough going for tanks, to account for the winter muck.

The German side had battle group of an infantry battalion, with attached PAK 40s, included one mobile battery on an RSO chassis, and a company of Stug IIIgs. The Panzer Battalion had two companies of Tiger IIs, and one company Tiger Is. I applied a house rule for the King Tigers, where they would risk breaking down if they tried to move too far too fast, to account for what I understand to be their pretty awful record of mechanical liability.

Soviets always bring a lot to the Spearhead table, and this was no exception, with 20 platoons of T-34/85s, 9 platoons of JS-2s and attached heavy and light gun regiments, as well as two infantry battalions.

Of course, with Spearhead, you get to have all of the elements covered off, including off-table artillery and air support. The Russians had the use of a Sturmovik flight, while the Germans had a 150mm gun battalion off table (with only three fire missions) and the vain hope for as many as two passes by Ju-87s with AT cannons. Given the state of the Luftwaffe at this point in the war, the Germans would need to roll Vegas to get those Stukas to show... 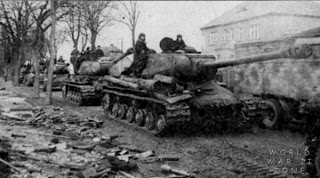 "Who came up with the terrain rules for this f**ing scenario?"
The Soviets made a slow, mud-choked advance, ultimately being ambushed by the waiting German infantry and AT guns. The hapless German rifle platoons knocked out several tanks, and a first mission of 150mm artillery hit some Russian infantry pretty hard, but the mud was a bigger opponent than the Germans. Gradually Bill and Mike managed to collect a fairly serious concentration of armour and infantry ready to roll over some Stug IIIs defending a German roadway.

For the German's part, Dallas advanced the heavy panzer battalion slowly on to the table, with only one platoon suffering a break down. The pace was gradual, but a pretty cool head to head tank smack down was taking shape.

But then the Stukas came...

Yes - the German players needed a vegas roll, and they got it - TWICE! The German forward air controller obviously had a phone plan with unlimited weekday and weekend minutes. The Russian armoured column was quite concentrated, and the Stug crews had a great vantage as the planes massacred the Soviet tanks with their 37mm AT cannons. It was enough to rout the JS-2s, and leave the T-34-85s, weakened by suprise AT attacks from pockets of German infantry to face a gun line of Tiger IIs...we called the game at that point.

Props to Dallas for the Rudel-like air support rolls (especially after the last two artillery strikes accomplished nothing). As Arty says in his rules, airpower brings "joy and heartbreak". A valley full of smoking Russian tanks served as testament to both aspects of timely air support in this game.

So, in terms of the JS-2s vs. Tiger IIs...I guess that will have to wait for another game! The JS tanks were all wrecked before the Tigers could engage them.

As for the scenario, I really overdid it with the terrain restricitions. While the gumbo-like terrain rules gave an appreciation of what fun it is to lead a tank spearhead through muck, I think it prolonged the game needlessly. In the event we play this one again, those aspects of the rules will change for sure!

Thanks to everyone for coming out and playing (even though the mud-like progress kept us up pretty late). Thanks also to Bill for the show and tell from Historicon!
Posted by Greg B at 12:54 PM

Good report Greg! Thanks again for running the game. Although in my defence I have to say that once the heavy tanks became available I moved them at pretty much full speed every turn!

Sorryt I missed the ngames. It sounds like a lot of fun.

Is there any interest in doing an Ostfront ground-attack themed Check Your 6! scenario? I have some ideas about using Stukas and Bf-109s against Yaks and Hurricanes...