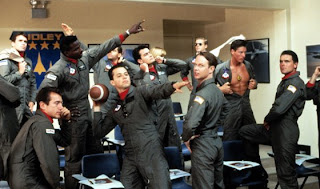 The scenario features Ork fighters and fighter-bombers, including some kind of "suppa bomba" or something (basically an Ork B-25), attacking Imperial armoured vehicles. An Imperial fighter squadron was on hand to defend - and if they felt like it, attack the Ork vehicles as well. Both sides (critically it would turn out) had some AA defences on the ground - two flak "wagonz" for the Orks, and three Hydra AAA vehicles for the Imperials.

Dallas, Brian, Dave V and Bill took to the air for the Orks, while Cam and I flew the Imperial side. Cam had a section of two Thunderbolts and also controlled the AA. I had a squadron of five - that's five - thunderbolts, including one ace. We faced an ork flight of about 10 planes (?), including the new super bomma (which looked awesome - Dallas did an amazing job on it).

I was pretty sure we would rip the Orks - "we" being my awesome, five-plane squadron. Cam would chip in. Little did I suspect that Cam had his own, three part strategy: 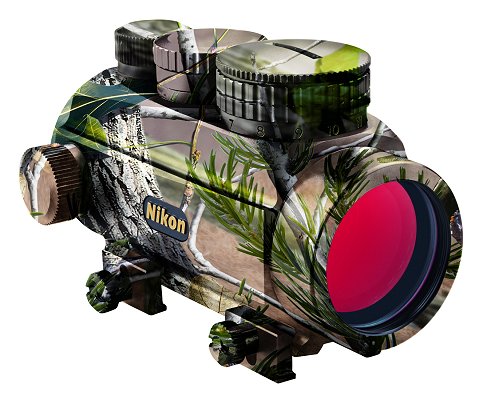 The Imperium may have a mixed record on planes, but obviously has some kind of advanced optics lab for its AA guns 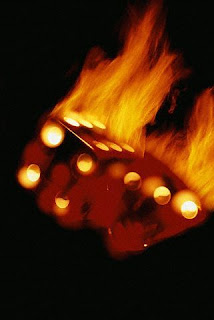 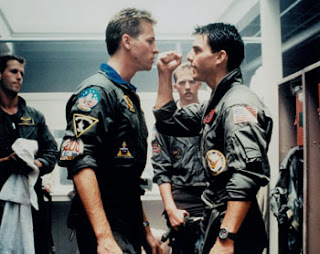 "Hard deck my ass! We nailed those SOBs!"

The Orks raced across the table. I pushed ahead to engage. I had Brian and Dallas lined up in my sights, and was reaching for the kill-stencils when it emerged that my ground crew had loaded the Thunderbolts with paint rounds. We missed everything, while Brian started to blast my pilots. I lost one fighter in the first round, another one damaged, and all of the swearing in the world was not helping.

Dallas and the gang were feeling pretty smug, then Cam opened fire, and the tables turned rapidly. Cam's flak batteries picked at least two ork planes per turn. Cam's fighters - he had two of them - managed to damage an Ork tank, shoot down three Ork fighters, and generally cause mayhem.

The orks strafed and bombed, but thanks to Cam, they basically flew home empty-handed - those that flew home at all. I should note in their defence they did everything they were supposed to do, complete with some wonky flying that kept us guessing. We also had made an error on how easy it was for the Hydras to hit - we were hitting on "5"s and "6"s - it should have been "6"s. Still, Cam rolled plenty of those. I don't think it would have made much difference.

Also, Bill had a tough outing with the big bomber - Cam's flak venitlated the thing(of course), although it was not shot down. But just about every single bomb and strafing run did not wound any vehicles. In addition to great gunnery, Hydra tanks are apparently manufactured with unobtanium armour.

My superstar pilots? Out of five planes, three were shot down, for only one - ONE - kill. We were a net burden to the Imperial side. We won as it was, but our margin would have been greater if we HAD NOT EVEN PARTICIPATED. What a great feeling. On the plus side, I think I won some pretty sweet initiative rolls. Pretty lame when that is your main talking point, but there it is!

Dallas took some pics of the game. I look forward to seeing them on the blog - in particular the huge Ork plane from Forge World. It looks awesome. Thanks again to Dallas for hosting, and to everyone for coming out. If Cam keeps this up, may God have mercy on us all.... 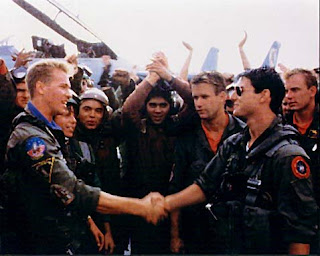 "Thanks for winning those initiative rolls, Maverick." 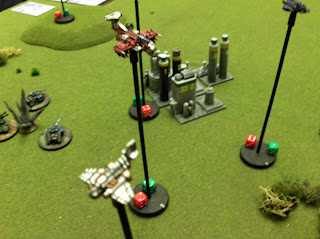 Crazy furball over the target zone 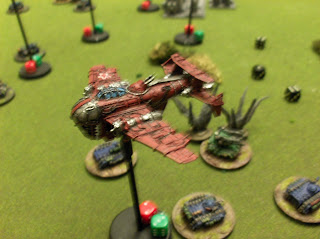