And the winner of our first poll is.....

For our first poll, we asked fellow Conscripts and visitors: "what should be resuced from the Zombies during our game this week?" The winner of our first poll is....a tie, as you can see, between a person immune to the Zombie virus and, disturbingly, a supply of Iphones. Out of respect for the democratic process, we will incorporate both elements into tonight's scenario. Besides, who can pass up a chance to use Apple products take more digs at Cam? 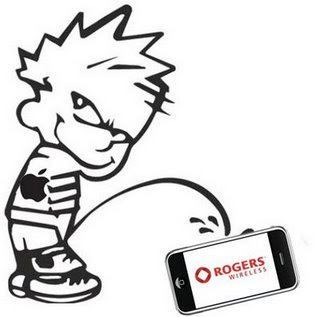 I love the book World War "Z", but in a way, it's too bad that it arrived on the scene before I-turd mania reached current epic proportions. Had World War "Z" arrived on shelves at this moment in history, one chapter would surely have slayed the image of Itools, nattering away about their stupid apps while the Zombies destroyed the US army at Jonkers. Author Max Brooks would probably have killed a couple of birds with one stone by having the Itools represented as a bunch of stock brokers who sold mortgage-back securities and structured-investment vehicles. But I digress...

So tonight, as inspired by Mike F's comment on the poll, the factions fighting the Zombies, and each other, to survive in the World War Z universe have determined that the continued function of their Iphones will be essential to coming out on top in the Zombie apocalypse.

The factions will be looking to capture a Rogers Wireless representative who is immune to the virus AND has the necessary technical knowledge to ensure the Iphones can continue to function. This person has been located (thanks to GPS and Google Maps, still working despite the apocalypse) in downtown Toronto, and stupidly bragged about their immunity using their Facebook status and various Twitter postings ("@WarZ bit two days ago, still nothing but want nachos"). From the SAS to the Bank Robbers and Homies, survivors have determined that this guy must be captured.

And the Zombies? Well, they are just happy to have some brains to eat. 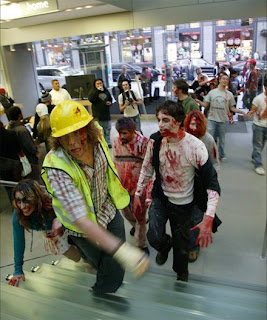 To keep with the Iphone vibe, and as inspired by Dave V and Dallas' suggestions, before every turn, players will roll to see which stupid app their faction manages to activate on their Iphones. Some might help against the Zombies - others, not so much...we've polled some of the real apps, and made up some impacts. We'll see if Cam actually has any of them too. I know he has at least one...

See you all tonight for some World War Z, Iphone-bashing mayhem. Also, welcome to stray Conscript Sean! Looking forward to seeing you.

I am entirely torn up about this, but I'm on shift at the Fringe until midnight. That said, I've started looking for appropriate anti-zombie apps already. You can never be too prepared.

Don't make us come down there and drag you to the game. Because I'm pretty sure there is an app for that...

I'll be swinging by around 11pm. My iPhone's google maps program will help me find the fastest route there.