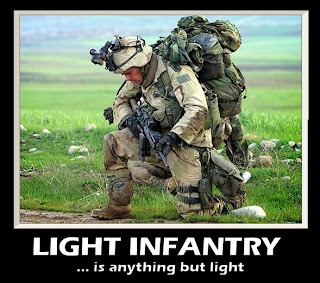 I'm thinking that, in addition to the items Greg mentioned in his main post, he is also a tread-head, thinks snipers are cool, and thinks GunSchwarm is 'da bomb'.

With that it mind, I suggest as a theme the 40K equivalent of a Bundeswehr reinforced mechanized platoon. The Guardsmen themselves could be painted in the Flecktarn scheme adopted by the modern German Army.

In the end, Greg would get a very interesting looking army, that could easily do double duty as Gunschwarm forces mobilized by Future Angela Merkel.

The two Veteran squads represent elements of the regimental reconnaissance company. They're first on the battlefield; the sharpest end of the stick, that the rest of the battle group supports.

The core response force is a mechanized infantry platoon, which has the capability to fight enemy light infantry and armour at relatively close range. Using its vehicles, the squads can move to seize distant objectives, or can quickly change the direction of an advance.

Tanks from the regimental panzer battalion have been seconded to the panzer grenadiers. Supporting the infantry directly are the Bane Wolf and the Demolisher. The Vanquisher supports the formation as a whole at longer range.

It should have a chance to f***ing win:
Orders are a new feature of the Imperial Guard. All the Vox-casters in the various units allow re-rolls of failed Ld tests when giving orders.

There is a mix of effective weapon types throughout the army. The sniper rifle/autocannon Veteran squad pins the enemy at range. The Veteran demolitions squad handles enemy fortifications and bunkers. The Vanquisher and its Tank Ace is able to deal with the heaviest tank armour at long range (BS4, 9+2D6 AP w/ Vanquisher Battle Cannon, 10+D6 AP w/ Lascannon, re-roll wounds against Monstrous Creatures). The panzer grenadier squads and all the Chimera APCs have a mix of weapons to deal with both lightly armoured tanks and with hordes. The Bane Wolf can kill an entire Marine squad with its chem cannon (template, AP3, wounds on 2+), and has capability against other infantry and hordes with its heavy flamer.

Meltagun variants are "the new black" for 5th edition; the extra D6 penetration helps against most vehicles (not the Wave Serpent energy field, but oh well). Rolling +1 on the Vehicle Damage Table is a good way to destroy both Land Raiders and Eldar skimmer tanks. The two command squads have Meltaguns to deal with tank armour at close range (I envision them fighting from inside the Chimera, using its fire points). At medium range, the Demolisher can deal with 2+ armoured foes like Terminators with its cannon (S10 AP2, large blast marker), and can deal with heavy tanks with its 2 sponson Multimeltas.

The Officer of the Fleet delays enemy reserves, allowing a force multiplier for the Guard forces already on-table. The Master of Ordnance rains down S9 pie plates.

The Extra Armour helps keep the Bane Wolf and Demolisher assault tanks moving. The dozer blade allows the Vanquisher to move more easily into terrain, thus allowing it a 3+ cover save due to the camo netting.

Defensively, the Veterans' snare mines count as defensive grenades, disallowing the "charging" extra attack for enemies that close assault the Veterans. The Veterans' camo cloaks add to their cover save. If they Go to Ground while in cover, they'll gain a 2+ cover save against incoming fire.

avoid any outright cheesebag options:
No two units in this battle force are identical.

The one named character, Pask, merely adds to his unit's effectiveness, rather than being some uber killy guy himself.

There are no obvious "ploys" like a Psyker squad pinning an enemy unit, then indirect fire ordnance nailing them.

This is a balanced force, able to deal with a lot of different mission types. For what it's worth, under Astronomi-con Composition scoring, this battle group scores 19 out of 20.

it should look cool, without taking forever to paint:
IMO, the Flecktarn camo scheme looks cool. Greg has done it before with his ultramoderns. To change it up, he could go with the desert variant.

So, what do you think?

One question for you - what is your view on the shotguns? Veterans can use them instead of lasguns, with no points cost alteration....is the shotgun a better weapon than a lasgun, in that it is rated Assault "2"?

For the Veteran sniper squad, the shotgun is less useful, since they'll most likely be fighting at range.

The Veteran demolitions squad should be always moving, used up close and personal with the enemy. Rapid fire weapons would only shoot 12" on the move anyway. So, you could swap as many shotguns for lasguns in the demolitions squad as you want.

Grenade launchers and flamers cost the same, too. You could go one GL and two flamers in the demolitions squad.

For looks cool factor, I may do shotguns in that one veteran squad...seems to chime with the "in your face" feel to them!

Shotgun in the face! Yikes!

We'll refer to them, Gün Schwarm style, as "solution tubes"...

I'll be very curious to see how the Flecktarn goes - as its much the same idea as the urban camo on my Guard. Good luck with it - unless you found a really really good trick for it.