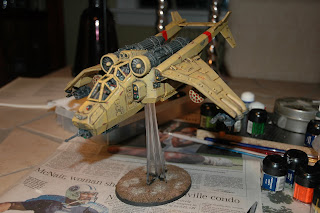 It's finished! All-in, with assembly and painting, it took about three weeks for me to finish one of the new 40k plastic Valkyrie kits. I have painted it in GünSchwarm colours, so it can aid in the noble purpose of strafing FuturKommies and transporting Gün Grenadiers to various military missions and VIP corporate sponsorship events.

There are a variety of options to arm it - I opted for rocket pods and a "multi-laser" (which looks practically identical to the lascannon, but would be lucky to harm a fly in 40k). The kit comes with two "hellstrike" missiles (huge, Phoenix-sized missiles), but in the end I liked the look of the rocket pods much better. The variant that I suspect will be most popular among 40k gamers, the "Vendetta", is armed to the teeth with lascannons, but in true GW fashion, they don't include the bits for that in the box.

In the end, I didn't want to go with the Vendetta variant on this model - it is a troop carrier first. I think it should have weapons designed to suppress enemy troops etc. In any other gaming system, free of the absurdities of "AP" rolls for shooting infantry, the rocket pods would hurt pretty good. Besides, the likelyhood of this thing flying in a 40k game is remote - the first priority of this bird will be flying in support of the GünSchwarm in our whacky and fun Futre War setting. 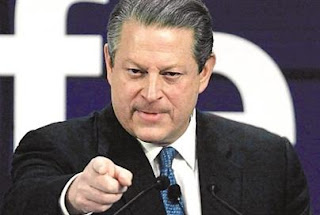 I have already ranted about the challenges of assembling this model, but I need to return again to the canopy. If anyone out there is contemplating building this model, I strongly, strongly remind you to be ultra-careful building the pilots.

The pilot models have big stupid GW skulls on their shoulder pads. Not only do these look absolutely ridiculous, if you are not careful, they actually prevent the installation of the canpoy. I had to pop the front pilot's left arm off TWICE to shave it down enough so the canpoy would fit over him, and even then it was a tricky job. And that is SO much fun when you have already painted it.

I'm not the first to say this (in vain), and surely won't be the last, but for goodness frigging sakes GW, not EVERYTHING has to have a fr*cking big skull on it!!!

On the plus side, special thanks to Dave V for providing great tips on using Future Floor Polish to give the canopy a good glassy finish. Did a stray, small paint brush fibre end up embedded in the Future on the canopy? Yes, but you can hardly notice it. I choose to look upon this as "character" for the model. 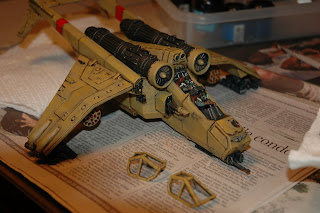 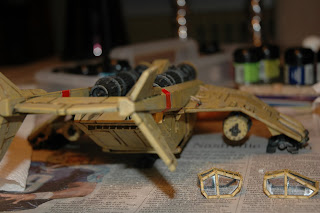 Mid-stage on the painting - no decals, getting ready for final highlights.

One other weak area is the decals. GW provides a copy of their older, pre-plastic Cadian Imperial Guard decal sheets with the kit. All the graphics on that one are lame, but the numbers are very handy, so I'm not complaining (they'll look great on my upcoming line of new Soviet armour). These particular numbers don't match the WW2-style German numbering I've been using on the other Gün vehicles, and the awesome stash Dallas gave me was running low, so I opted to raid my small remaining stash of 15mm scale DAK decals to provide numbers on the doors, wings etc.

What I would love to find some aircraft decals to go on the kit. Stupid things like "not a step" etc. would really help this model look more like a military aircraft. If anyone has a lead on how to acquire some of those (without having to buy a 1/48 model I will never assemble) please comment on the blog. 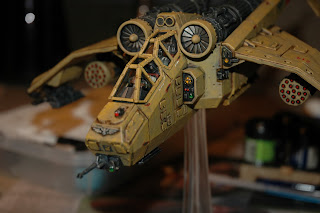 I'm still stuck with the Forge World Vulture model. In the wake of my last post, I broke the wings off to re-assemble them properly. Handled with the usual level of Greg B patience, this will be tricky to put back together again. And I think I'm going to switch the weapon load too (since I needed to pop all of that off the wings so it would face the right way) so it will be a "mixed" mission - 6 hunter-killer missiles for shooting at vehicles, and twin auto-cannons.

The auto-cannon is a mixed bag in 40k - a high-strength weapon with a middling "AP", meaning it isn't actually very good. On the other hand, the auto-cannons look great, and in the event it appears in a 40k game, they are good against light vehicles, the sides and rear-aspects of heavier vehicles, and together with the chin-mounted heavy bolter, will help against infantry and protesters.

Anyway, figuring out how to mount that sucker, much less re-assemble it, will be a big challenge. Still, now that I have that one flyer done, the gun-ship to go along with it would be pretty darn cool. Watch for more ranting in this space as that project staggers onward!
Posted by Greg B at 10:15 PM

you probably want to go to hobbylinc or squadron for the decals. You can get sheets of decals for pretty cheap, say $5 per.

Ebay might be another source, or finding decals from people who have replaced the stock ones with custom or after market.