Attack of the bad primer! 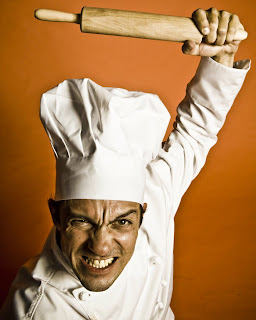 A little setback this weekend on the new 40k Imperial Guard project - attack of the bad primer!!

I generally use GW chaos black spray as the basecoat/primer (and it generally performs 100%), but in this instance it has eaten the face off my plastic sergeant, and generally defaced the guy holding the grenade launcher.

Maybe these guys could be test victims for that new Hellhound variant that shoots horrific poison gas?

Given that I usually prime my figs 10-15 at a time, I was lucky to escape with few casualties. Damn you primer!!!
Posted by Greg B at 1:33 PM

Ooo... that's a new one for bad primer tales. Gives me yet another reason to be smugly superior about having switched to gesso. :-p

Yeouch. I feel your pain.

I usually use that colour, too, as a primer.

Duuude... Colour Place flat black from Wal-Mart. Never had a problem at $3 a can.

Buying GW primer and having problems is like being wrongfully convicted and going to jail, only to get pounded in the shower. Insult to injury!

I've been scorched by the $3 stuff before - that's why I had been sticking with GW.