OVERVIEW
A renegade Baneblade has disrupted your battle plans. As its motives are of yet unclear, but it has the potential to destroy as much of your own force as that of the enemy. It is a threat that cannot be ignored! Use it to your advantage or destroy it to help secure victory!

The Baneblade had its own rules for movement and firing. The Baneblade started at the westernmost board edge and would move directly east as best it could.

This was a Kill Points mission, with the Baneblade worth 3 KPs (one for each structure point) and able to score Kill Points itself against both players' forces.

Mike won the roll and chose to set up first. He chose the north table edge, and declined to set up anything. This would be interesting...

I also kept everything in reserve; the Warp Spiders would Deep Strike.

Mike commented that this would be all about who got the Baneblade. I agreed with him, and we both turned out to be wrong.

The Baneblade had its player turn first, so it moved along to the east for two turns. The Witch Hunters then scored some hot reserves rolls, bringing on two independent characters (Sister Superiors?) a Seraphim squad, an Exorcist and a Rhino mounted Sister of Battle squad. The Rhino hunkered down in the ruins to the east. Just out of melta range, the Seraphim scored a couple of minor hits on the superheavy tank. The Executioner, with D6 S8 AP1 shots, took the first structure point off the Baneblade with a volley of missiles. 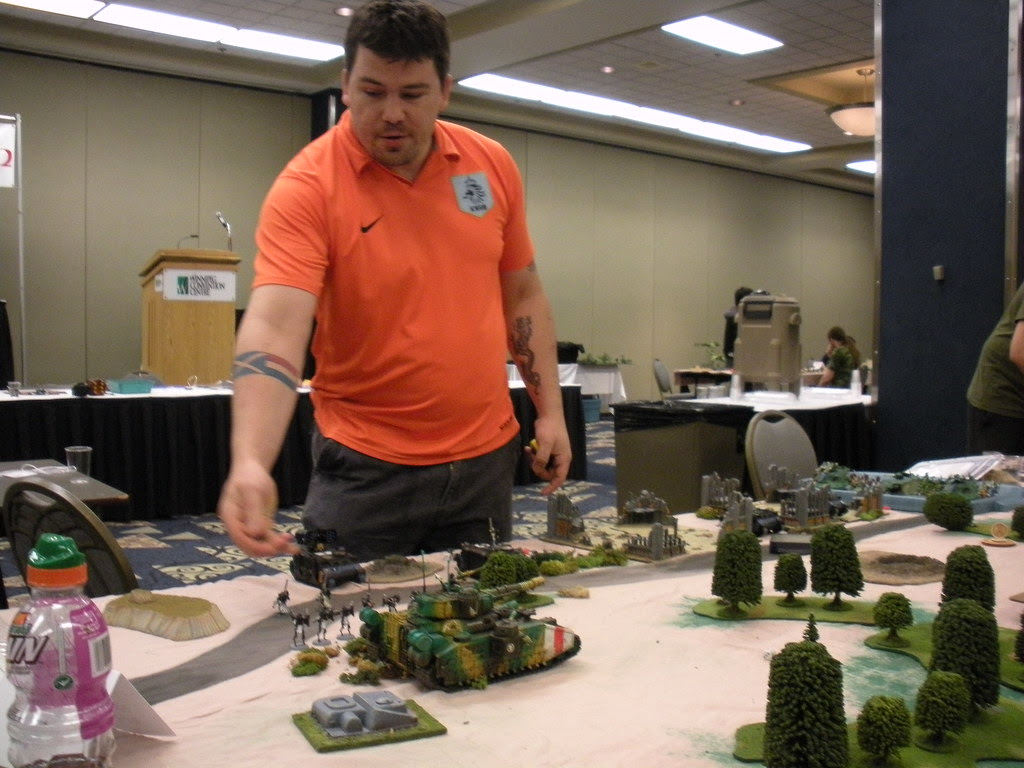 The Swordwind needed every hand, so opted to use the Autarch's +1 to reserves for everything. All four Wave Serpents, the two HQs and the Spiders came in. Only the Prism was left off-table. The Dragon's Serpent moved 12", turned around and Fate's Tears dismounted, readying their fusion guns. An Avenger Serpent moved flat out to capstone the Dragons, helping shield them from fire from both the Exorcist and from the Baneblade's next position after it moved next turn. The other Avenger Serpent with its TL Brightlances came on in the far southwest quarter, to take pot shots at the Baneblade. The Howling Banshee's Serpent moved flat out just to the east, shielding the BL Serpent from a lot of future gunfire.

The Farseer tucked herself in behind the Serpent in the soutwest corner. The Autarch prepared to assault the Baneblade next turn, moving beside the Dragons' boat. The Warp Spiders tried to deep strike behind the Baneblade, but deviated northward. 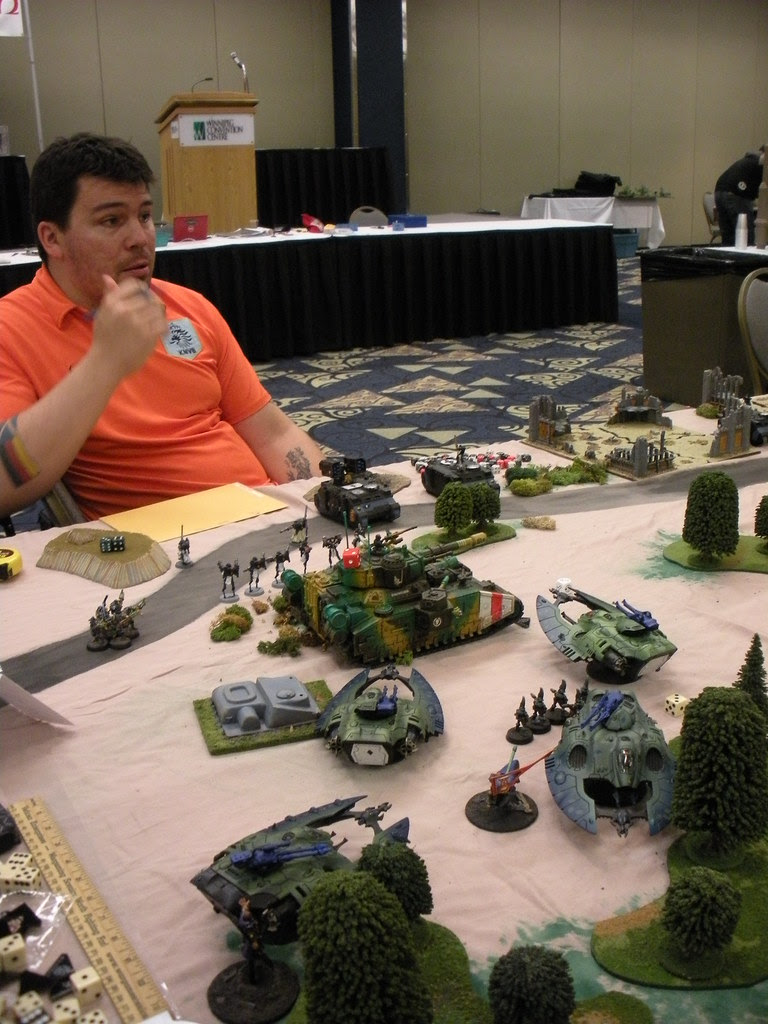 Two of the Dragons were actually within Melta range. The Dragon's fire slowed the Baneblade and took another structure point. The Brightlances did nothing. The Warp Spiders killed a single Saraphim with their shooting (in retrospect, they should have tried to gun down the character). They tried with their second jump to move south out of reach of the Sister's character, but didn't get very far.

The next turn was eventful. The Baneblade's guns started firing in every direction. Fortunately, only its heavy bolters targeted the Dragons. Yeah, I know, S5 AP4 - but at least it wasn't the main freaking gun. One Dragon fell to the sponson's weapons. The coaxial autocannon hit two Spiders, but their armour saved them. However, the main gun then targeted them, killing all but one, who was left standing in a new crater that I painted and brought for just such a purpose. 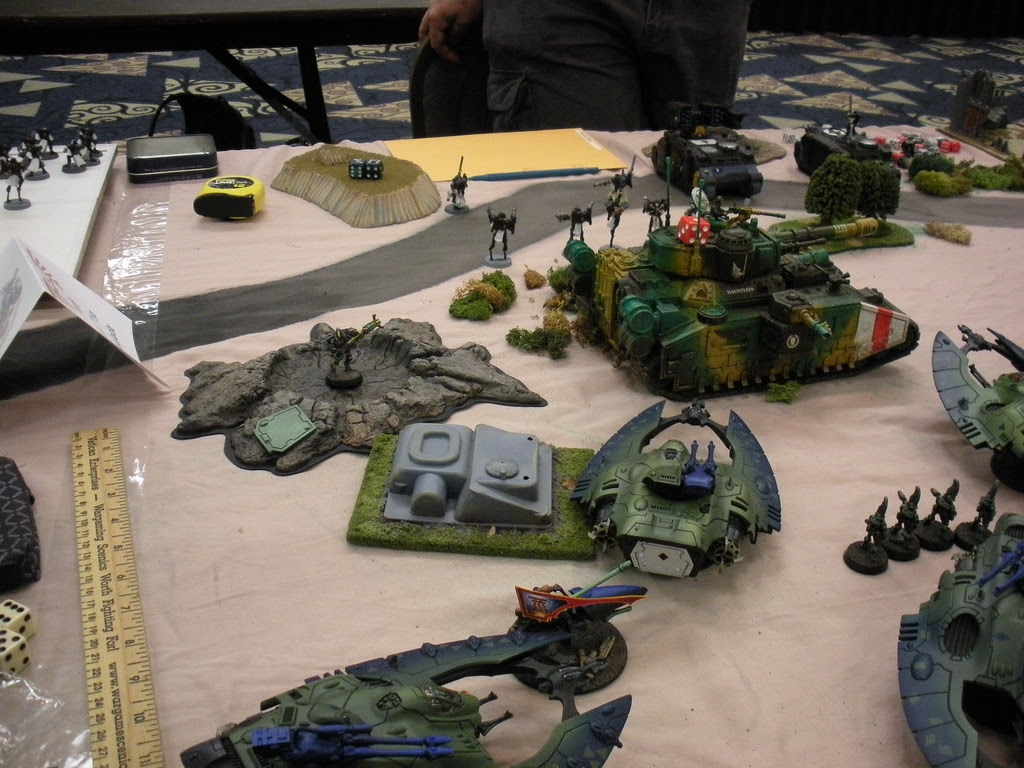 The Imperials brought on the remainder of their forces from reserve. Another Exorcist moved into the northwest corner, accompanied by a second Seraphim squad. Two more Rhinos came on, one by the middle Exorcist, the other to the east, behind the cover of more ruins.

The original Seraphim squad moved close enough for their melta pistols to fire at full effect. They rolled well, destroying the Baneblade in a large explosion that also killed three more Fire Dragons. The last Dragon passed his morale, no doubt enraged at the loss of his temple brethren. 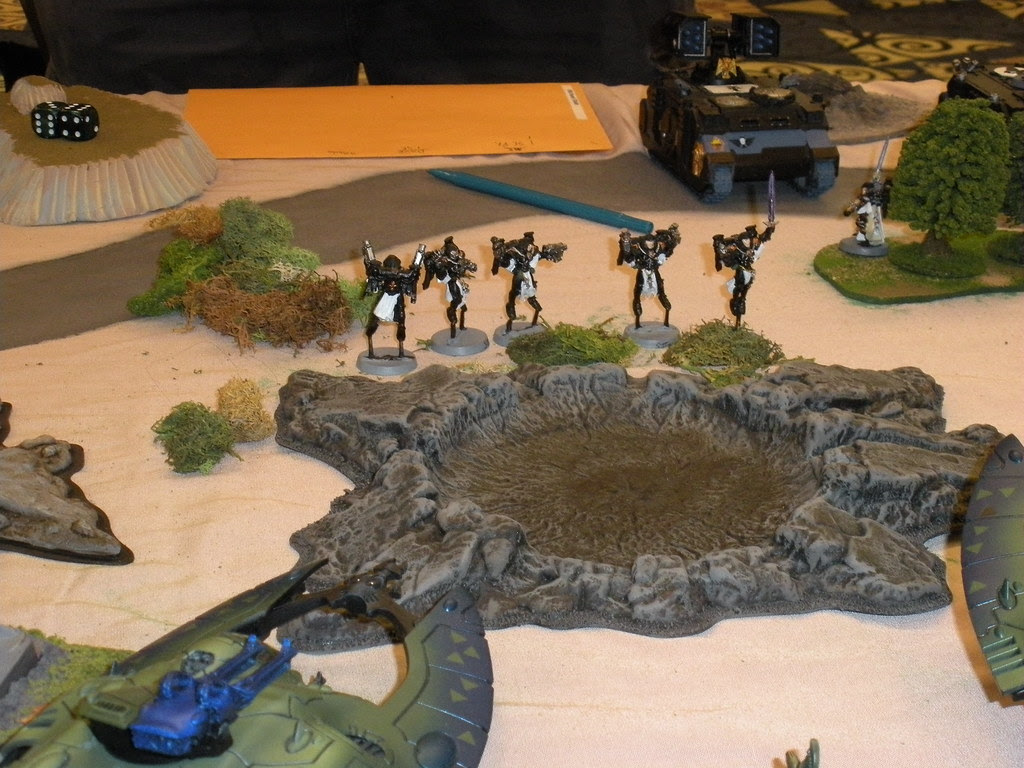 Fire from the two Exorcists was devastating. Both Avenger squads' Wave Serpents were shot down, taking away a significant portion of the Swordwind's mobility. The following photo shows how one Serpent managed to shrug of two glancing and one penetrating hit through the 4+ cover save for moving flat out, only to succumb to a glancing blow (the white "3" in response to the red die). 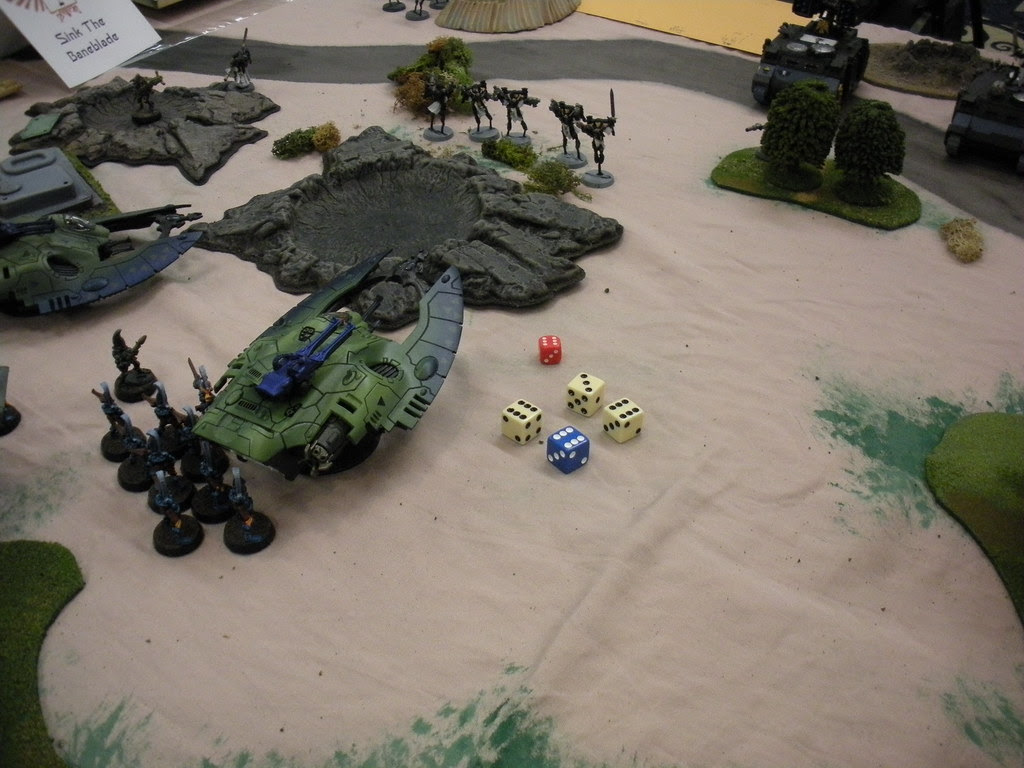 To add insult to injury, the Sisters character seen in the top of the picture is just about to smoke the last surviving Spider with a melta pistol.

Things were looking very grim indeed for the Swordwind. However, the Farseer wasn't one to just give up.

The Fire Prism showed up, and moved onto the table with LOS to the Exorcist in the northwest corner. The Dragons still existed, in the person of their final squad member. That worthy mounted up and his Serpent moved north. The Banshee's Serpent meanwhile leapfrogged ahead, capstoning the Dragon boat by interposing itself between it and the remaining Exorcist. The Autarch tucked himself in the acute angle formed between both mobile Serpents.

Fortunately, neither Dire Avenger squad was pinned in the wreckage of their vehicles. The Companions, in teal armour, moved to Bladestorm the victorious Seraphim. The Blood Redeemers, in dark blue armour, moved north to support the Farseer. 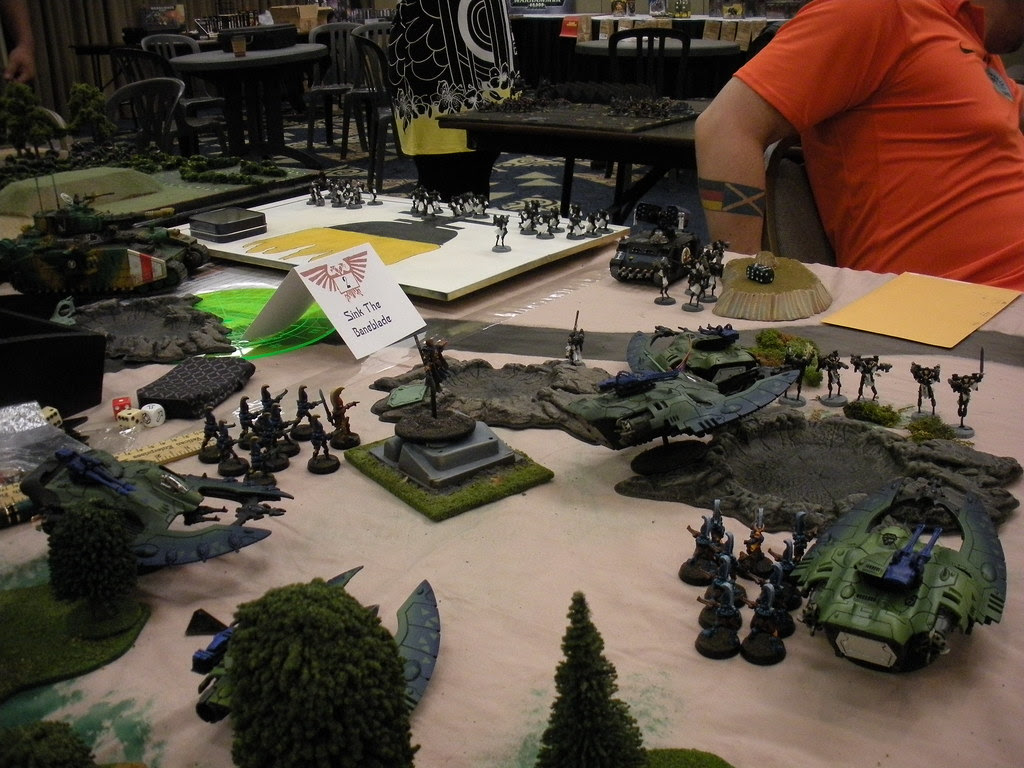 The Banshee's Serpent, with a side shot available, fired its turreted shuriken cannons at the centrally located Exorcist, stunning and immobilizing it. The Companions' Bladestorm completely swept away the Seraphim in front of them. The Fire Prism landed a focused blast on the other Seraphims, killing one.

The Autarch challenged the Sister Superior to single combat, and she gladly accepted. Who would win this contest of power weapons? Whose martial skill would reign supreme? 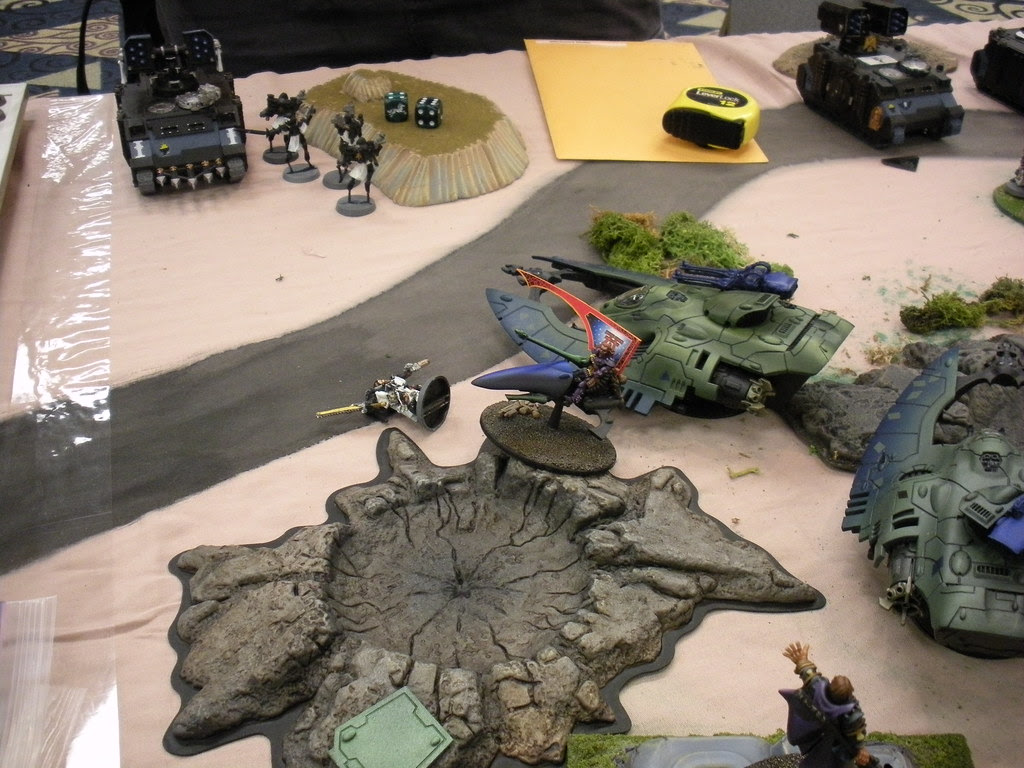 With the loss of the character and the Seraphim, the game's outcome was now less clear.

The Rhino mounted squads started moving toward the centre of the table, the easternmost squads using a road to good effect. The undamaged Exorcist immobilized the Howling Banshees' Serpent. It had only moved combat speed, so it settled to the ground, still protecting its precious cargo.

The Seraphim moved to attack the Autarch. Their shooting failed to wound him, so they charged home, in order that they wouldn't be charged themselves by a S6 power weapon. The Autarch manged to survive their onslaught. 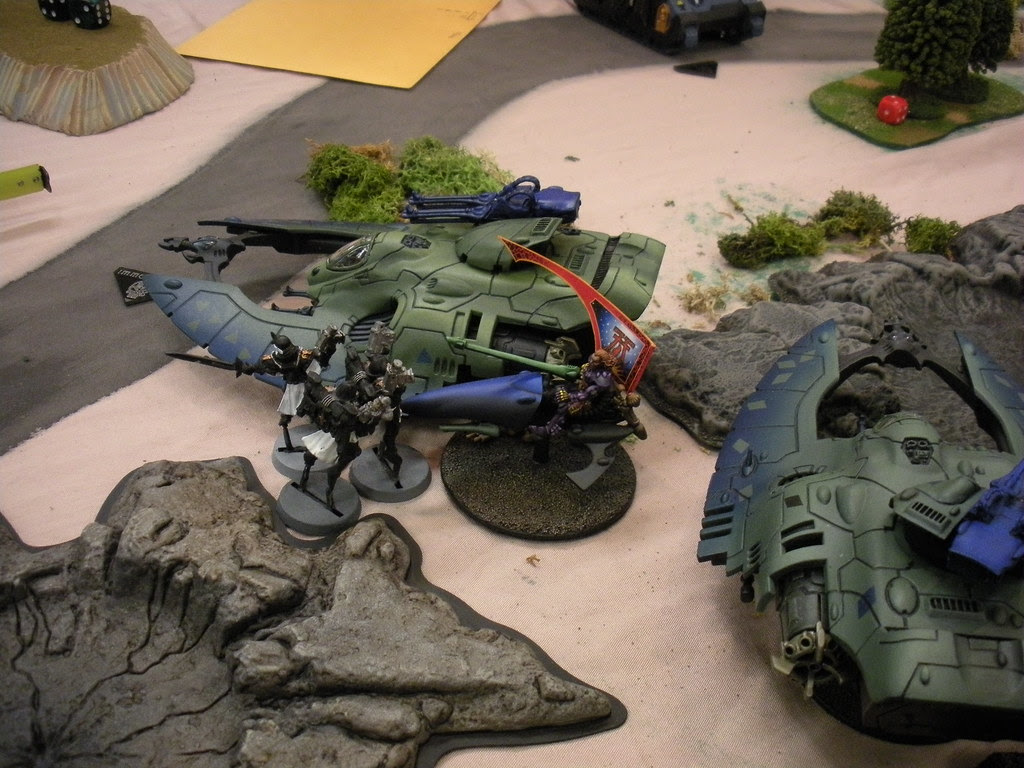 The Farseer tried to Doom the Seraphim, but their faith was too strong. The Dragon Serpent moved north and the lone Fire Dragon leaped out beside the immobilized Exorcist. He blew up the tank with a bolt of superheated plasma. Luckily, he wasn't killed in the ensuing explosion. 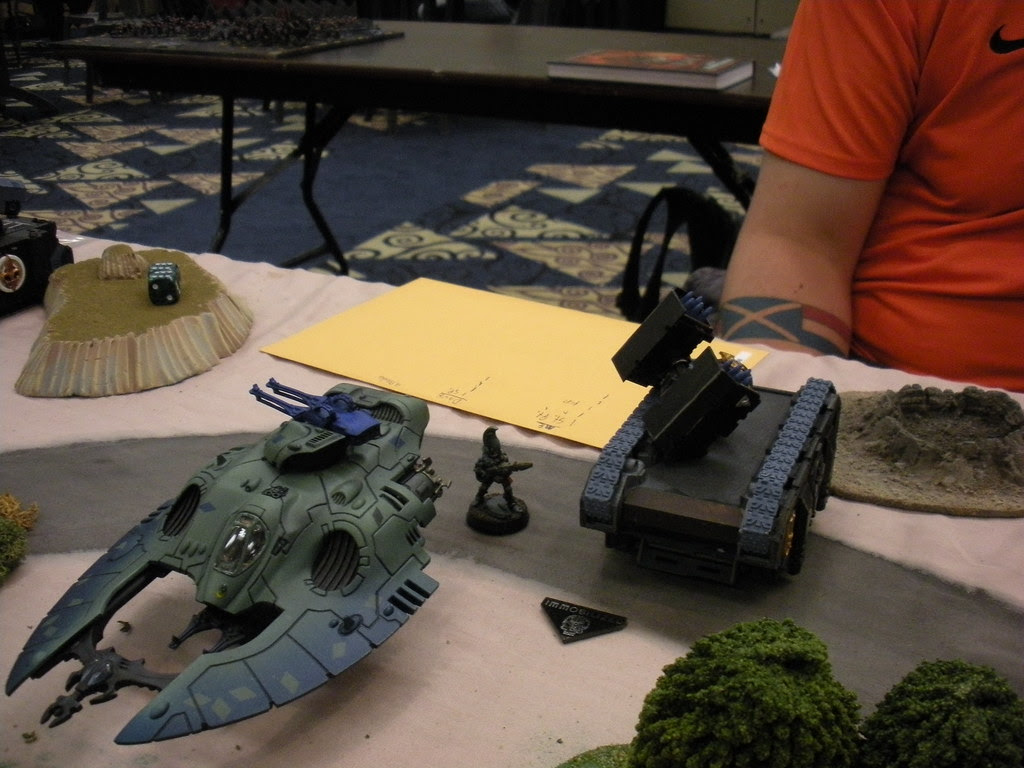 Meanwhile the Blade Dancers disembarked, moved and ran to surround the Seraphim. The Farseer moved north to cast her Singing Spear. The Blood Redeemers moved to support the Farseer. The Companions, out of ammo for a turn, moved southwest.

The combined fire from the Farseer, Dragon Serpent and Fire Prism destroyed the remaining Exorcist. The Banshees charged, rolling 30 attacks, wiping out the Seraphim. 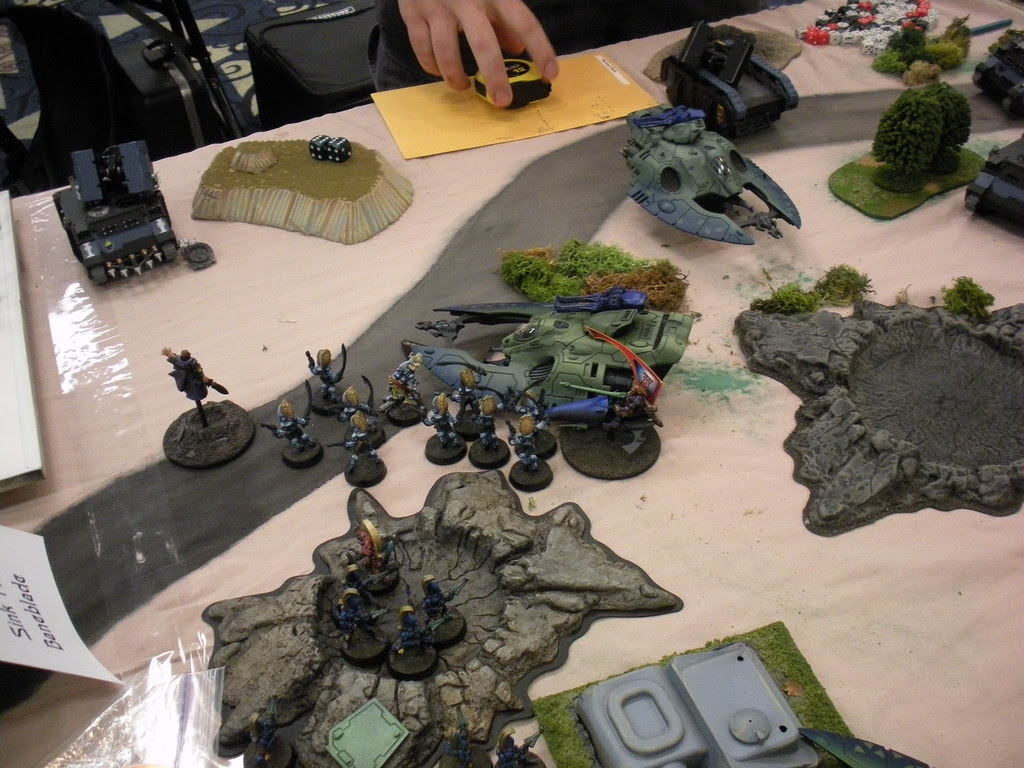 The Autarch consolidated east, to draw the fire of the vengeful Sisters.

The game had now changed as the Swordwind tried to retain their KP lead and avoid being defeated in detail by the remaining Sisters of Battle.

Time was running down; it was almost supper time.

The Sisters of Battle advanced westward in a rough line abreast. The Sisters in the southernmost Rhino were joined by the remaining character, and rapid fired at the Autarch. Beyond all reason, the Autarch weathered most of the shooting, passing his invulnerable saves against the Sisters' energy weapons. His armour held up to all but two bolter rounds, leaving him with one wound remaining.

The last Fire Dragon moved behind the northernmost Rhino. The Dragon Serpent and the Fire Prism skimmed east to block the other Rhinos, cutting off the lone Rhino from any support. The Farseer moved against the Rhino, supported by the Banshees and the Blood Redeemers. The Autarch moved over the heads of the dismounted sisters of Battle squad, in order to contact the independent character who joined them. The Companions moved north east to Bladestorm the Sisters.

Despite their best efforts, the Fire Dragon and the Farseer failed to even damage the Rhino. The Fire Prism, Avengers and Autarch dropped a few Sisters. The Autarch charged, and the remaining Sisters moved in response. The Autarch allocated all 5 of his S6 power weapon attacks against the character, killing her outright when she failed an invulnerable save. The remaining Sisters failed to wound him. The game ended at that point, due to random game length. 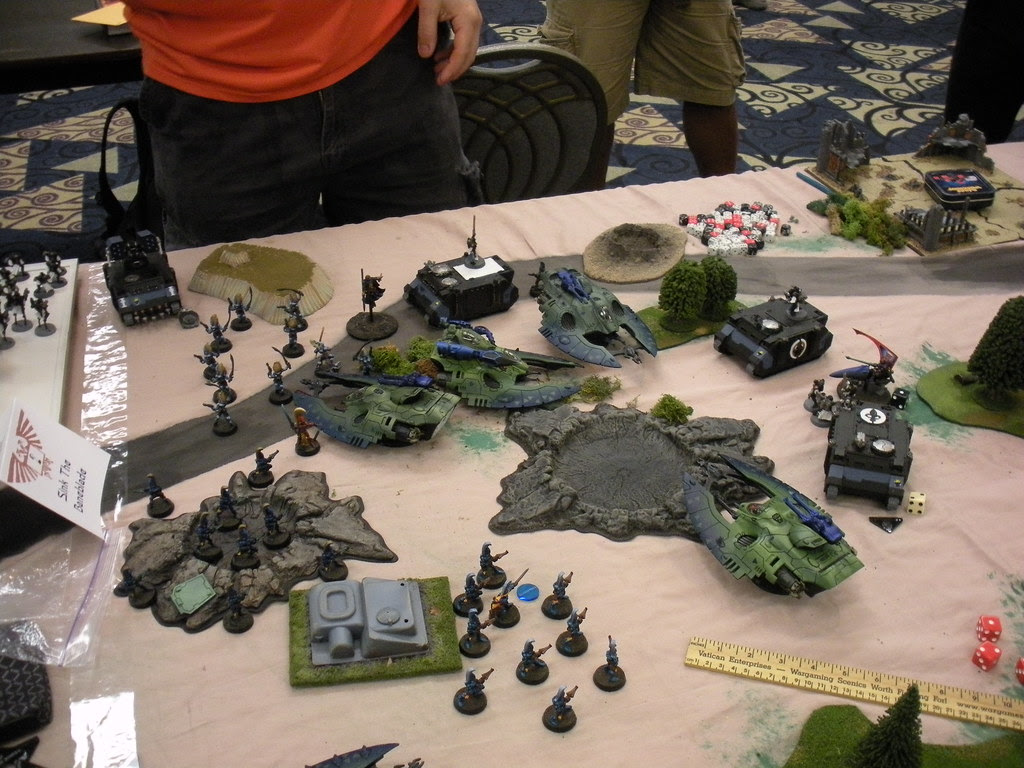 What a drama filled game!

This was a good end to the first day. Three great games, against three worthy opponents. What would the next day bring?

Click here for the next game.
Posted by DaveV at 7:01 AM