Canada Day gave me a chance to get back into some painting/modelling. I have been working on some flyers for GünSchwarm, using the 40k Valkyrie/Vulture models. so I thought I would share the trials and tribulations via blog!

For some reason, years ago, I purchased a Vulture Gunship from Forge World. I had delusions of this thing providing mobile fire support for armoured column in my "blue" Imperial Guard army. I had probably just watched "Apocalypse Now" or something, and saw visions of the gunship swooping to pounce on enemy vehicles, troops, environmental protestors, tax-collection centres etc.

The Vulture currently retails on Forgeworld for 54.06 GBP (not sure what the .06 is for - great service, maybe?). At any rate, I picked it up years ago, so only bent over to the tune of 40 GBP. Still obnoxious. Not sure what that works out to today with inflation etc., but as we all know any encounter between our third-world export subsidy currency and the Pound Sterling is bound to leave you feeling sore.

Once I received the "model" (a.k.a. loosely packed hunks of flash-covered resin), I realized once again how the reasons you seldom see these on the table go beyond price or bonky "Imperial Armour" rules. You pay a fortune, get nothing in terms of instructions, the thing is baked in flash, and there is no clear way to base it or mount in a way to use on the table. Pretty de-motivating. Way to go Greg - Forgeworld Tool of The Month. I should get a hat. You would think they would send me one after I ordered epic Tau...

So the Vulture sat for years in the spares pile. Like, I think, at least four years - literally. In business, I think that is called "stranded capital" or something. And you probably get fired. Thank goodness it's just a hobby. Besides, the air support would not have made much difference for the regular drubbings received by my Imperial lads.

With the arrival of the recent pseudo-new Imperial Guard codex for 40K (you can almost hear the "cut and paste" when you flip through the new book), low and behold a plastic Valkyrie, the troop carrying flyer, hits the market! With GünSchwarm always in the market for a needless esclation of the Future New New Arms Race, I picked one up at the local GW store. And, feeling inspired, I dug the hunks of resin out of my 40k spares bin, and got to work on the Vulture too.

Here are some preliminary progress shots. 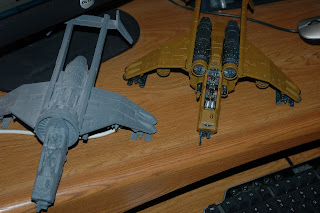 The Vulture (left, above, still waiting for a full coat of grey primer because I'm not sure I won't break parts off to try again) was very tricky to assemble, as the casting is extremely poor - well beyond things that soaking it in hot water could fix. Getting the tail assembly to hang together involved a lot of hack-saw work thanks to the appalling cast-job at the engine sides. There are also two flaps underneath which don't exactly line up, but I'm not an obsessive model-assembly person, so I don't exactly care. I'll just say the flaps are varying as the vehicle is making some kind of manuever.

The wings were a nightmare to fit in. They actually fit better backwards. So I went with that (although I may reverse course, pop them off and try to re-mount forwards). Given the much sleeker profile of the Vulture, I figure a not-exactly-the-same wing profile as the Valkyrie would not be a big deal.

The canopy has huge disaster potential as well. With high-priced consideration that only Forge World can offer, they helpfully provide a hunk of clear plastic sheet, from which you can cut the canopy glass yourself! Thanks a@@holes.

For weapons, I plundered the numerous tank sprues which have been acquired in the GünSchwarm re-armament spree, assembled six hunter-killer missiles and mounted them on hard points under the wings. I used the las-cannons that came with the model, but they are such flash-covered garbage that I may pull them off and simply modify some un-used plastic ones from the Imperial Guard heavy weapon sprue. In fact, as I type, that sounds like a great idea. Watch for more pictures on that.

Mounting it will be a pain too. That new GW flying base is light-years away from being ideal. Channeling Sony, the GW tools have designed the flying base so it will only work with specific GW models. Plus, it doesn't even tab into the plastic oval base, so it is quite weak considering it's holding a flying model! Dave V provided me with some good ideas on how to work with magnets to perhaps mount the vehicle, so I'm going with those notions. Dave has some awesome flyers in his Eldar host (well, awesome until they are strafing your troops to bits, but anyway) and they are solid, so hopefully I'll be able to report positive progress here on the blog as I mimic his great example. 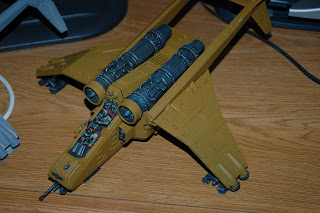 The Valkyrie had to be better, right?

Well, for starters, at $70 CDN, it feels a lot like paying for a Forge World model. On the plus side, you get instructions, nice clean sprues. On the down side, the level of detail you are expected to assemble is unbelievable. And GW's new trend toward unclear, language-free, computer-rendered instructions leaves you guessing a lot of the time. And the parts aren't numbered or anything, so you are often scouring each different sprue over and over again for a stupid little bit that isn't very clear in the instructions.

Whoever thought up the canopy should be tasered. While you are not expected to cut your own windows, the panels at the edge end up as a kind of mixed media - some are moulded right on the to "glass" - others are seperate fiddly pieces in the sprues. Much trickier than it has to be. Painting the canopy will be a big pain.

The cockpit is a real challenge to assemble. The pilots don't quite fit. And of course they have helpful enormous skulls on one shoulder. Which is great, because I imagine a gunship pilot probably doesn't move their arms very much, right? I bet those skulls really intimidate the enemy pilots.

Hardcore people can also assemble door-gunners with heavy bolters. I considered this, but I find that having the gunners simply underlines how the 40k troops are over scaled (or the vehicles are underscaled). In theory, the Valkyrie holds 12 soldiers. With those door-gunners taking all the cabin space, it looks like it can't hold 12 drinks. To be fair, the Valkyrie is hardly the only vehicle with this issue, and GW is far from the only company with it either.

For mounting on the flying base, be sure to use your knife/file to significantly widen opening on the plastic bracket, otherwise the cross-shaped plastic flying mount will not come close to fitting, much less safely holding the vehicle.

But a break from ranting. The plastic Baneblade was a billion light years better than the Forge World predecessor, and the Valkyrie is not the same level of improvement. But still, props to GW for giving it a go. $70 CDN is still a lot cheaper than whatever the hell it would cost to get that thing in resin from the clown college at Forge World. The instructions are weak, but way better than the pamphlet you get with Forge World. While the door-gunners are not to my taste, I think including them, complete with heavy bolters, is a great touch. In the end, I think it will be a cool model, and I won't need f***ing magnets to mount it.

The base GünSchwarm colour pattern has already been applied. I hope to have this sucker ready to strafe FutreKommies by the weekend, with more pcitures on the blog.

Great kit review, Greg! You can also strengthen the stand to base bond with epoxy putty (green stuff) built up, say 1/4 inch up the stand. Use 5-minute epoxy glue to affix the stand first, and it should be a strong bond.

Currently, I'm working on a Death Storm drop pod for my Crimson Fists marines. FW resin parts that "fit" into a plastic drop pod, replacing the troop cradles with lotsa missiles. All I can say is "Yay!" for gap-filling super glue.

Dave - wise advice. I don't own any expoy (and therefore am taking a huge risk with just the glue holding it sound), but I'm going to get some this weekend.

I'm still shocked at the flying base...how could the company that was home to the "slotta" base put out something that needs epoxy? Disappointing.

You could try the pre-assembled, pre-painted Terminator Salvation hunter-killers...

But where would be the fun in saving time, money and effort?

Fair point Sean - but I like to think that, for what you pay, you can still get a much more straight-forward model.

A good example from GW (since I've been beating up on them) is the new Rhino. Yes, some model building is involved. But you are not, for example, assembling the stupid treads.

I just wish that on the Valkyrie, the flight stand was more solid - after all, this company has a huge, long history of doing bases that generally work!

>You could try the pre-assembled, pre-painted Terminator Salvation hunter-killers...

Say, where d'you get those? Sounds like just the kind of thing that FuturKom might be into!