OVERVIEW
Under the cover of darkness, your forces are looking to surprise the enemy – unfortunately, they’ve got the same idea.

Final game of the tournament. I was matched up against Kevin and his Imperial Guard:

The scenario involved night fighting for the entire game. Players scored Victory Points for enemy units killed, PLUS Victory Points for each of their units remaining at the end of the game. This meant that if, say, I lost a 100-point transport, that would open up a 200-point gap between us, enough for a win!

The table was a Necron-esque series of pyramids, obelisks and ruins, with a large pyramid at one end of the two rows of little pyramids, and a reflecting pool at the other end. Each side could only set up one Troops pick on the board at the start of the game. 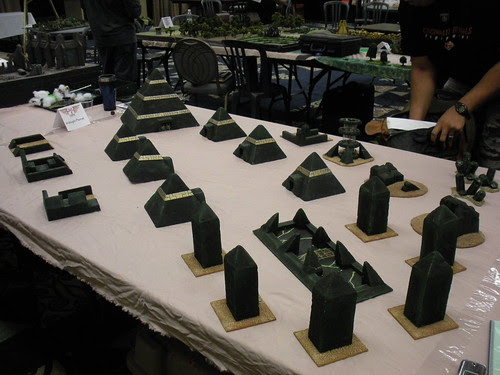 Kevin won the roll and chose the (north) board edge with the reflecting pool. He set up his first Veteran Squad in the pool. A good choice. Their ML could cover almost the entire table, especially if firing at something caught in a searchlight. 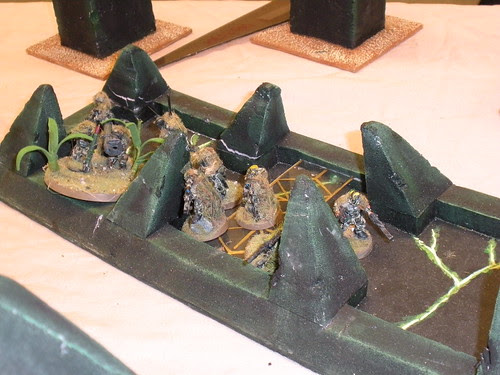 I set up the Companions, mounted in Ancient Whispers, hiding behind the large pyramid. 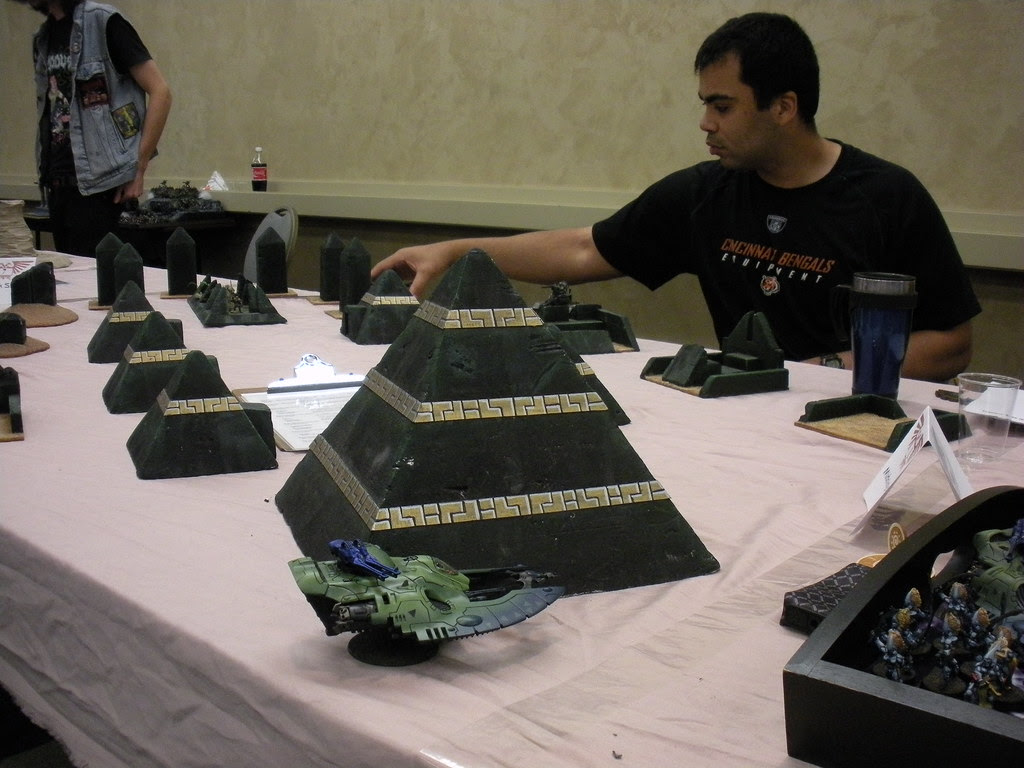 Tactics note:This Wave Serpent had TL Shuriken Cannons in the turret, and a Shuriken Cannon in the nose. If I ever have to go with only one Troops pick, this unit is my default choice. This skimmer would be good against most vehicles, especially from the flanks. I also feel that the two-gun Exarch gives me the best options against most infantry targets. My other Avenger Serpent has TL Bright Lances. Placing it alone on the table would make it a high priority target for any opponent. Also, by keeping the Brightlance Serpent in reserve it may be easier to move it where it needs to be when it becomes available.

Nothing at all happened the first turn, as neither of us desired to move.

Into the second and third turns, it became very clear that Kevin and I were going to play this one very cagey. The tournament was Swiss for pairings after the first game. Facing each other as we were in the final game, Kevin and I would have had identical or similar battle points for game play (that is, roughly equal win-loss-tie scores, factoring in extra battle points for mission objectives completed). A tie would garner each of us 7 Battle Points, plus any bonuses. However, a win would be a base of 10 points. We were both at or near the top of the leader board, so I figured that a tie would be OK, but that we'd both try for an end-game win if we could.

Starting from approximately the centre of the north board edge, moving west, Kevin deployed the second Veteran squad in a stone bunker-like affair, the Exterminator, a Heavy Bolter Chimera, the Heavy Flamer Chimera, the remaining Chimera, the Company Command Squad, and the Vanquisher. With the searchlights on the Chimeras, the APCs could be deployed forward, lighting up vehicle targets for the Vanquisher to hit with its penetrator rounds.

For the Eldar, the Guard Stormtrooper Squad was a worry. With aggressive placement, it could Deep Strike behind a transport and pop it, maybe even killing the occupants if there was no room to get out. I'd seen a good IG player named Stephie (yes, she's a woman) from Burlington, ON, do the same to me at the Toronto Astro a couple of years ago.

So, I moved on cautiously in the southeast table quarter. I declined to use the Autarch's "+1" for Reserves roll until my 3rd turn. That is, until after the Vanquisher had appeared. That way, I was helping to keep my skimmers off the board and immune from being shot at. I used the various pyramids to mask the skimmers' movement, using the Warp Spiders and the HQ jetbikes to shield the rears of the transports.

By the top of the fourth turn, everything on the Guard side had shown up. The drop squad Deep Struck next to the wading pool, declining the bold insertion. Everything except the Fire Prism had shown up on the Eldar side. The Guard was too far away for any of their night fighting spotting rolls to work. 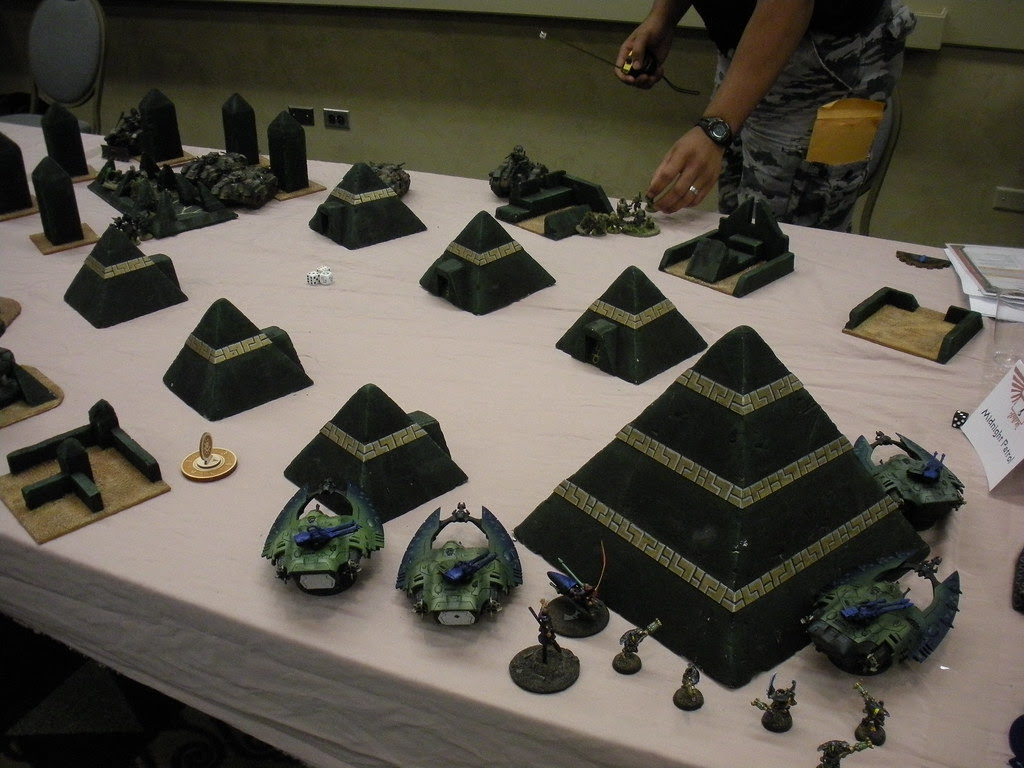 At the bottom (Eldar) half of the fourth turn, I decided that it was time for the Swordwind to make its move. I rolled a "1" to bring on the Fire Prism. Oh well. I went with what I had.

The Veterans with the Autocannon were the most exposed of the Guard infantry. They seemed to be dangled out as bait for the Eldar to try and snatch up. The four Wave Serpents moved flat out north and west, leading with the Banshee Serpent ("Fencing Master") capstoning the Dragon Serpent, with the other Serpents, the jetbikes and Spiders following up behind them, using pyramids to block LOS. If Fencing Master went down, the Banshees would still be in a good position to assault the Veterans.

At the top of the fifth turn, Kevin moved back the Exterminator, keeping it away from the Dragons' melta range in my following turn. He re-oriented the Chimeras to face east with their front armour.

However, this is where he made a critical choice. He could have either moved the Veterans back or, as he ended up doing, kept them in place to try and shoot down a Serpent with their Autocannon. The lead Chimera lit up the Banshees' Serpent with its searchlight. However, none of the Guard shooting stopped it; Fencing Master was merely Shaken.

By moving the Exterminator back and by not moving the Veterans back, Kevin left a slight gap between the Veterans and the rest of his army. This was exploitable if I moved very aggressively.

The Blade Dancers dismounted and moved toward the Veterans in their stone bunker. Their Serpent moved over them at combat speed to block vehicle movement toward them and the bunker.

The Kid (the Fire Dragons' transport) moved flat out to the other side of the bunker, to help shield the Banshees next turn from heavy flamer fire and to place the Dragons in a good position. The skimmer made its Difficult Terrain test, required because it didn't quite make it all the way to the other side of the bunker. Even if their boat was shot down, The Dragon squad, Fate's Tears, might disembark, move, run and be able to assault a couple of Guard vehicles with their melta bombs.

The Avenger Serpents, the Spiders and bikes moved up in support, ready to pounce next turn if the Guard counter attacked.

The Fire Prism had also showed up. I placed it in the middle of the south edge, to take a shot at the source of the searchlight beam, the Chimera. 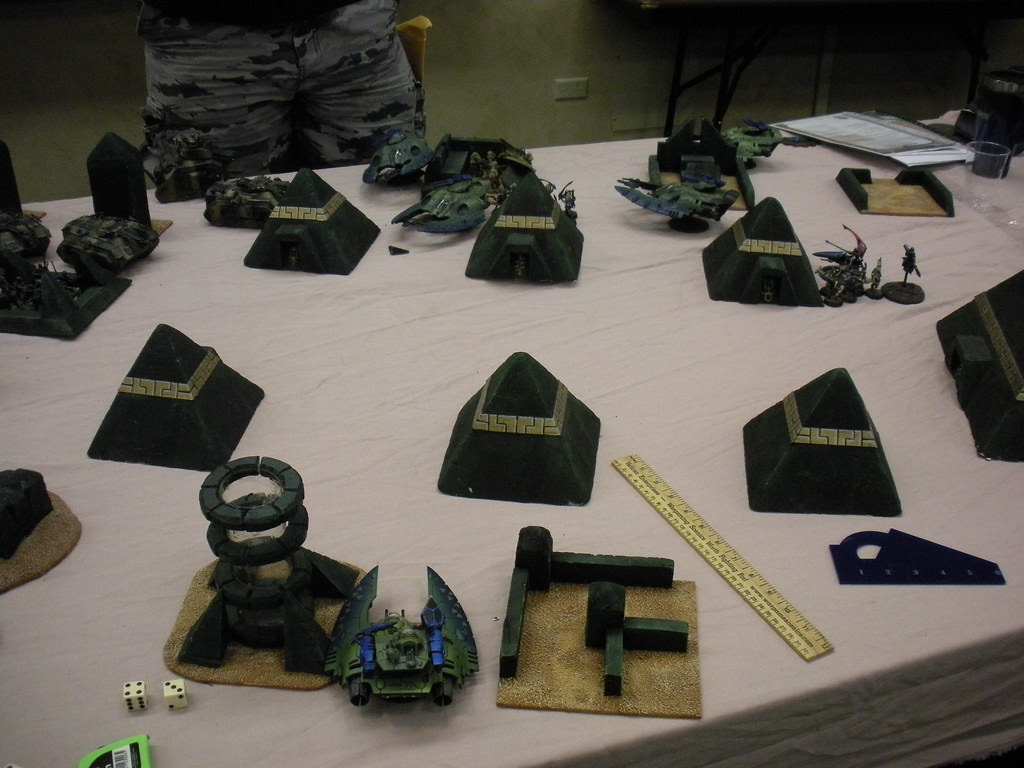 Now for the Shooting phase. Shooting at the Veterans would be pointless (2+ cover save when Going to Ground, and the Eldar had no flamers), so I didn't even bother. The Banshees could reach the Veterans on the charge with an average Run roll - they rolled a "6" and the Exarch Angelic Rhapsody led her warrior women in an all-out sprint towards the Guardsmen.

The Fire Prism failed to do anything to the Chimera.

The Howling Banshees made their difficult terrain check, and assaulted the Veterans. 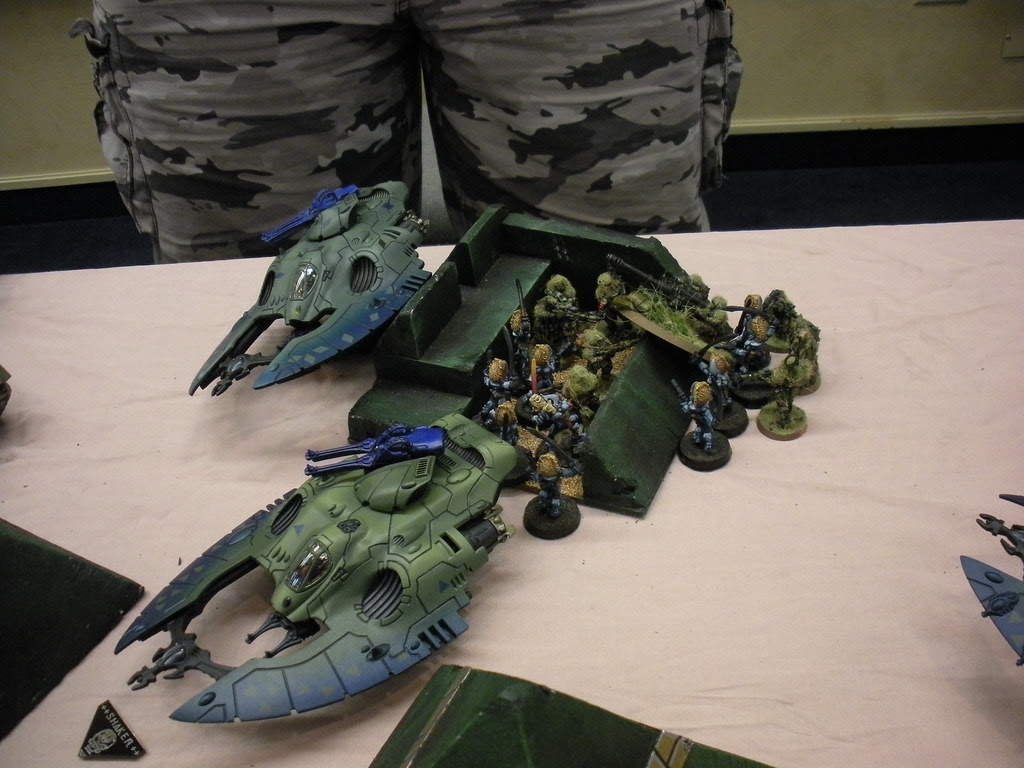 The Veterans were wiped out. The Banshees consolidated as best as they could to open up their formation, wary of flamer templates and marker weapons. 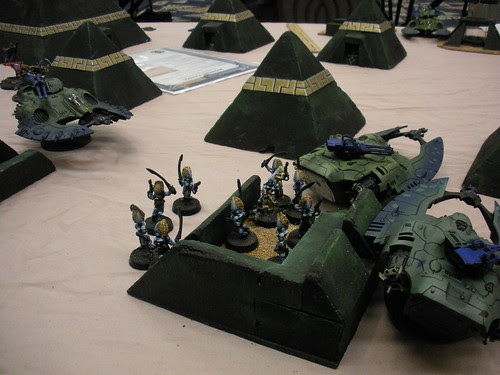 At the end of the assault phase, the Shaken counter was removed from the Banshee Serpent, and Kevin rolled for random game length. He rolled a "2" thus ending the game.

The only casualties on either side was the lone Veteran Squad. That garnered the Eldar 130 Victory Points, for a total of 1629 VPs versus the Guard's 1369.

We were finished early, so Kevin and I had a good chance to talk. We agreed that this was maybe the most tactical of our weekend's games. It was all about placement, movement, and counter-movement. He admitted that those Veterans with the AC were bait. He said that not moving the Veteran Squad was critical to the game's eventual outcome. We agreed that we both had great fun, despite the relatively bloodless result.

The photo below shows Mike Major and Christian Augst, two of the three Astronomi-con organizers. Missing from the photo is Keith Grant, the resident rules guru (he's pretty much memorized the 5th ed. rulebook). Mike and Christian were announcing the results of the tournament. 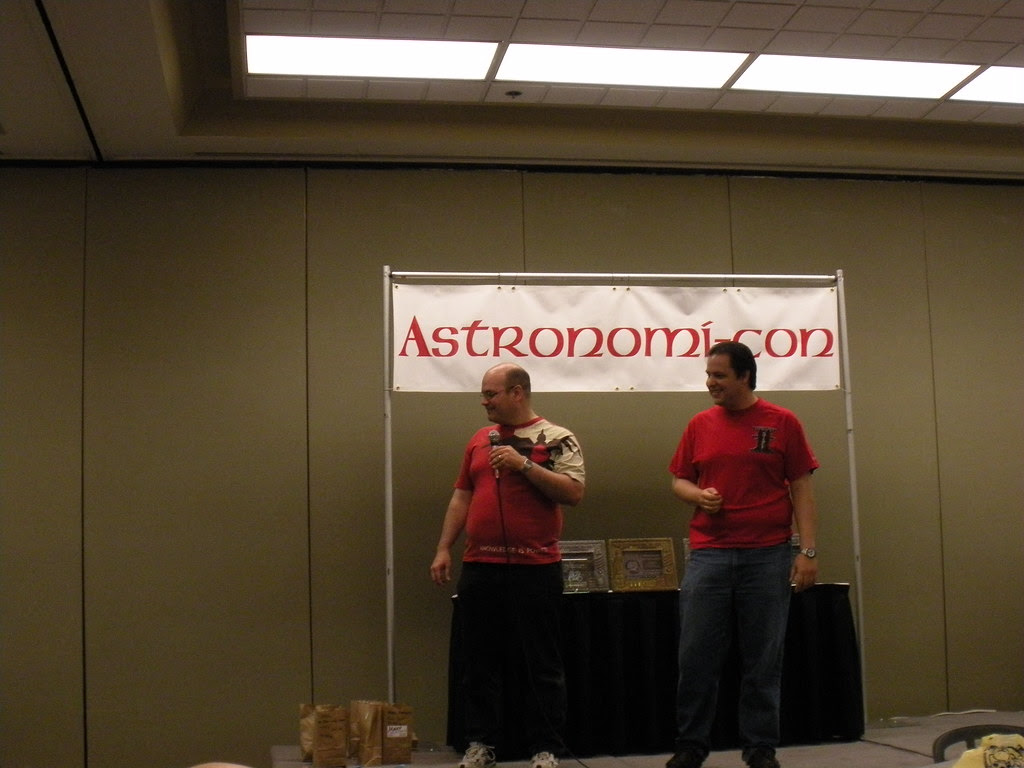 The prize plaques can be seen on the table behind them. They are different resin plaques (for each category) rigged up with electronics and a 9v battery to light up like a 41st millennium data pad.

As the organizers stated in their opening comments, many of the awards went to tie-breaks and many games came down to a die roll at the end. From my own batreps, I can attest to the latter fact.

Thanks again to all my opponents, and to Christian, Keith and Mike for a great gaming weekend.
Posted by DaveV at 7:04 AM