Imperial Guard for 40k - Now What? 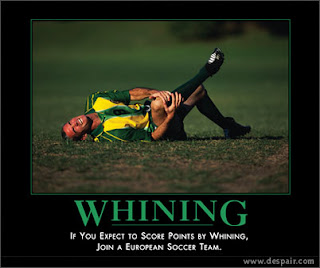 Well, now that I have ranted about the "new" Imperial Guard Codex for Warhammer 40k, the question is - Now what? While 40k games still make me mental, I have quite the pile of painted 40k Imperial Guard figs and vehicles, and following a recent browse through the pending/will-have-to-get-to-that-sometime-pile, I have actually amassed quite a bit of unpainted stuff. From Vostroyans to plain old plastic Cadians. Why not attempt to reconnect with my inner fan boy, and attempt to build a new 40k Imperial Guard army based on the new Codex. As the poster above says, enough whining. Besides, I am not in the physical condition to join a European soccer team.

If nothing else, it will make for great blog fodder. After all, this blog is more than a venue for teasing Cam (FYI - be sure to vote on our latest poll). Fellow Conscript Dave V, likely the most knowledgeable and passionate 40k gamer amongst us, has agreed to chime in with feedback and observations as I contemplate this new force. So let's start the discussion.

My prior preferred Imperial Guard force was essentially a glorified Storm Trooper unit - a "Grenadier" platoon. Low on troop numbers, high on vehicles (which themselves have a lot of add-ons), low on success! The army had some regular troop elements - enough for a platoon of three squads of grunts, but not much more than that.

With the changes in the Codex, this force is no longer a valid one. The Storm Troopers are (logically) elite choices only. I could use one infantry platoon, and then bang together some veterans, creating a second troops choice and a "valid" army for the Codex, but that still leaves a pretty top-heavy setup, with three elite slots packed with mechanized Storm Troopers, and a few hapless grunts who in truth are doing more to serve as technicality to allow the Storm Trooper detachment on to the table than actually contributing to success on the table.

Guidelines for the "New" Army

Broadly speaking, what should the new force look like?

Well, I think it should be 1500 points. As Dave V has often pointed out, larger army lists don't really compel any tough choices in terms of selections. If I can come up with a solid 1500 point Imperial Guard force, then I'm set. For fun games, we'll just add the Baneblade!

It should have some good character to it - some kind of unifying theme - even if that is just attained through the painting.

It should have a chance to f***ing win, in particular against the Eldar and Space Marine armies likely to be encountered in tournament settings. Especially against Space Wolves, who are about to receive yet another completely unneccesary codex of their own, and who suck on the level of Wolverine, C3P0, Sony and British WW2 tanks.

And finally, it should look cool, without taking forever to paint.

So - over to you Dave - fresh from your successful encounters at Astronomicon Winnipeg - what sort of Imperial Guard forces have you seen that might fit into these criteria?
Posted by Greg B at 1:28 PM

First off - Wolverine is cool, in the comics where they examine what goes on in his head. And the Centurion is technically a WW2 British tank and it still sees active service, and the Israelis have some fascinating variants that serves as super APCs. But anyways...

Force look - well what do you want to do with it? Im planning a batch of Veterans with a decently large platoon to provide numbers.
The unifying theme for me is a unit that has been locked in an urban fight. Infantry squads tend to have sniper rifles or special weapons as the heavy weapons are going to be grouped into Heavy Weapon teams, even though those are more fragile this codex. As for veteran squads the primary fire unit will be led by my Not-Harker and will be anti-infantry heavy with 2 Heavy Bolters and probably 3 sniper rifles or plasma guns (have to check codex to see whats legal) The other squads will be packing melta to serve as my anti-vehicle/heavy armored trooper spam. My vehicles will the be the stumbling point, while I have my sentinals (1 egg RT sent and 3 2E steampunky sents). If I can track down a decent set of plans for a Centurion or preferably a Nagmaschon Im going to try and scratch build and cast my Chimeras.

As for quick to paint - two suggestions.
1) I use a sponge to apply the camo to my troopers, so its pretty fast to apply as I do the camo and just go back and retouch the details.
2) Look into the Citadel washes if you havent already - why highlight and shade when you can just basecoat and wash?

ENM - LOL on your Wolverine observation. Suffice to say the other conscripts know I'll never give on that. Believe me, the LEAST cool aspect of Wolverine are the tool-like angst-ridden introspective moments (in between appearing in posters looking all roughed up, when in fact he spent his time brooding about himself). But I acknowledge the mass appeal of Wolverine.

I like the sound of that Urban fighting theme with the sniper rifles. And if you kit bash some kind of Centurion, that sounds pretty freaking cool! Definitely send pictures!

I have never actually tried the sponge-painting technique, although I've heard good things. And yes - the washes are a god-send. I've been coating almost everything with Devlan Mud.

I'm getting ready to post my thoughts on this. Just wanted to ask a few questions.

1. Did you want to continue with your "Urban Guard" paint schemes? You already have so many figures and tanks painted blue. You could still add changes, like using the "sponge" technique noted above to add lighter and darker variations to your basic blue basecoat.

2. Did you want to still field some Stormtroopers? They can be fielded as Elites, Deep Striking to bring their special weapons to bear.

3. Are you good with a mostly-armoured force?

Dave - I'm pretty wide open in terms of what I would contemplate, but let me try to answer.

In terms of colour, I would try anything! Grey? Purple? Blue again, but a different shade? You name it. I've already done a "test" figure with similar colours to the German grey seen on my Gün Schwarm troops, but with black flack armour and brown boots.

Might also be fun to try some camo patterns, like the dark greens and browns on Dallas' Bundeswehr.

Certainly keeping with the blue vehicles will be a short cut to any new force. I have four Chimeras (although they have autocannons, but whatever) already. I also have a Vanquisher, Demolisher, and just a "regular" Leman Russ.

But I'm prepared to paint a bunch of new stuff for sure. I still have three unpainted Chimeras. I have a kit to convert to a Hydra. I also have spare Whirlwind bits that might serve to creatively create a Manitocore when placed on a Chimera chassis.

As for Storm Troopers, I would love to use a squad of them, but at the same time my last army was built around them, so I think it's time for a change.

So in short, suggest away!

I should have added that snipers would be cool - but I'm not stuck on them. I think the force Evernermore describes sounds neat, but I'm open to suggestions.

Actually the sponges work wonders for adding dustings and weathering to minis.

What kind of camo colors are you looking for? I tracked down a neat little book called Brassey's Book of Camoflauge - only goes up to the 1990s but it has a huge variety of pictures.

Here is a link to the specific tank/APC I want to scratch build http://s151.photobucket.com/albums/s150/evernevermore/Reference%20material/
Well actually scratchbuild and 40kify. Its based on the Centurion chassises (or is it chassi?) that the Israelis considered inadequate for front line MBT duties, instead they converted them to truly heavy APCs.

And as to Wolverine - I recently found a series called Wolverine Noir which is an interesting retelling of his story, with Noir twists. But thats me