ATTACKER’S OVERVIEW
You’ve located a small force of the enemy holed up at a nearby farm. Sneak in and attack before more enemy forces arrive.

DEFENDER’S OVERVIEW
This farm was the most defensible place you could find. The sector is being overrun by the enemy. Put your sentries out and hold until reinforcements arrive!

This battle was against Ken's Imperial Guard:
-Company Command squad with the Master of Ordnance and a named character
(Stracken? I don't recall; Ken only had one copy of his army list)
- Infantry platoon with two infantry squads plus platoon command and two mortar squads
- Veterans w/ Meltaguns in a Chimera
- Psyker squad in a Chimera
- Large Ratling sniper squad
- Hellhound flame tank
- Leman Russ battle tank

For the tournament, I used the latest variation of my Swordwind: 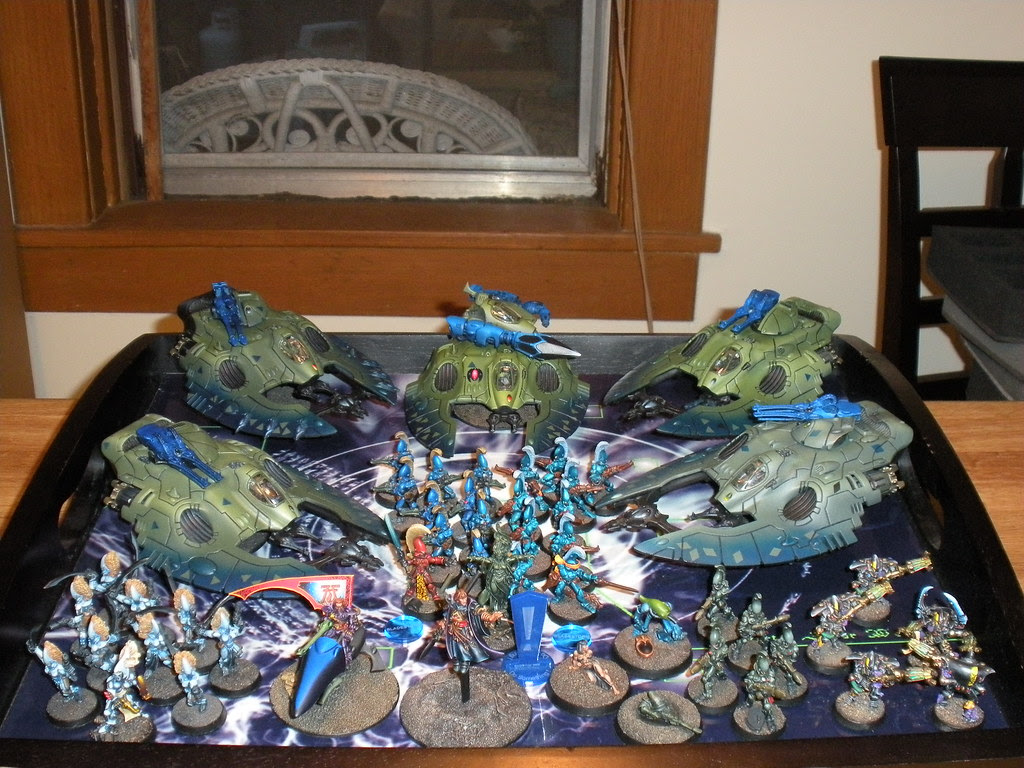 Ken won the roll so chose to be Defender. As Attacker, I could field Infantry units, including units without their dedicated transport. At the end of the game, the side with the most Victory Points worth of troops inside the northwest table quarter would win.

Reserves would start appearing only after the game proper started. The "pre-game show" was like the old Kill Teams or Combat Patrols. only the Defenders sentries were active. For each sentry, both sides would roll a die. Winner got to move the sentry the die roll in inches. So, if I won the roll-off with a "4" that sentry moved 4 inches. The alarm would be raised at the end of a phase if the attacker had models within Initiative distance of a Defender model. Shooting attacks, using jetpacks, etc. would all cause the alarm to be raised. If the Attacker wiped out a Defending unit in close combat, the alarm would be raised on a 4+. only the sentries moved during this pre-game action. The rest of the units rested in place, no doubt sleeping or otherwise doing what soldiers do during their downtime.

The Defender set up his platoon inside the farm area with his sentries on the periphery.

I chose to go with the tried and true - a squad of Avengers and my Banshees. I set up my infantry to the far east, hoping to divide his sentries and make a gap to rush in. If the Eldar could wipe out the IG forces before the alarm was raised, they would win!

The photo below shows our initial setup. An errant Banshee was correctly positioned before we shook hands and commenced play. 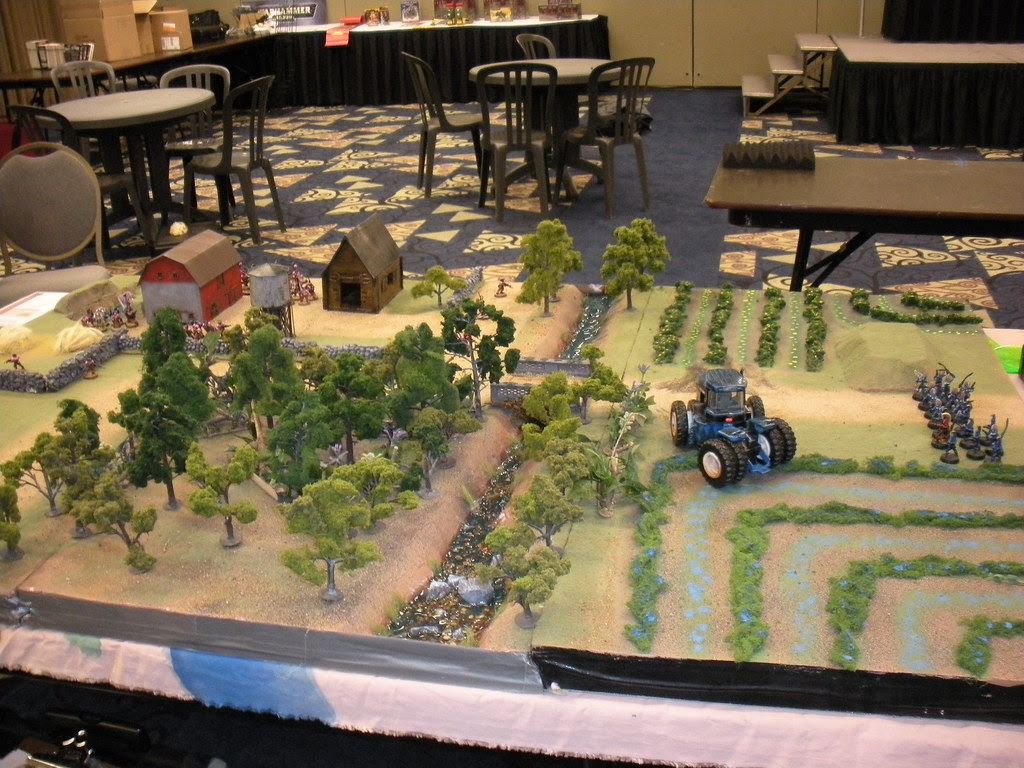 The table was a beautiful setup built by Kevin Nelson, who ended up being my opponent in the last game. The board is actually very figure friendly. Half of the crop rows are merely painted, to allow figures to fit. All the trees plugged with wire into the insulation foam base, so they could be removed and replaced easily for movement.

The first 60 minutes of our scheduled two hours was spent jockeying for position as the Banshees and Avengers moved around to the South and West. While the Avengers drew off half the sentries, getting some of the Guardsmen caught up in the forest, the Banshees changed course and ran northwest towards the snipers... 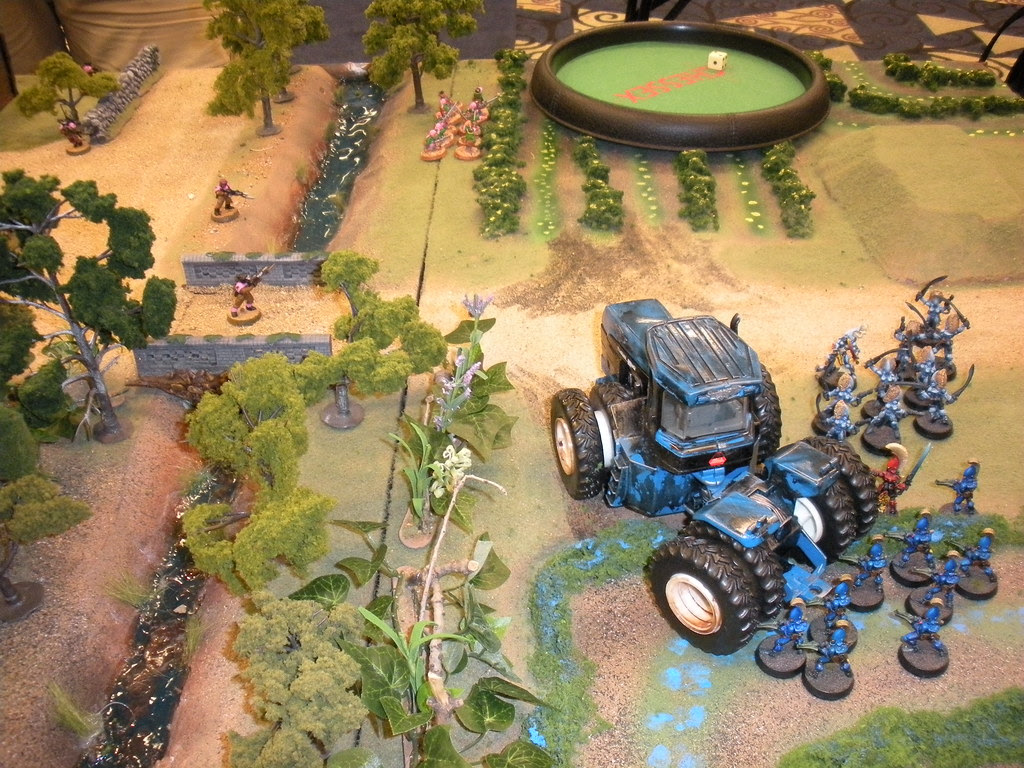 The action heated up when the Banshees snuck through a gap in the picket line and rolled over the snipers. 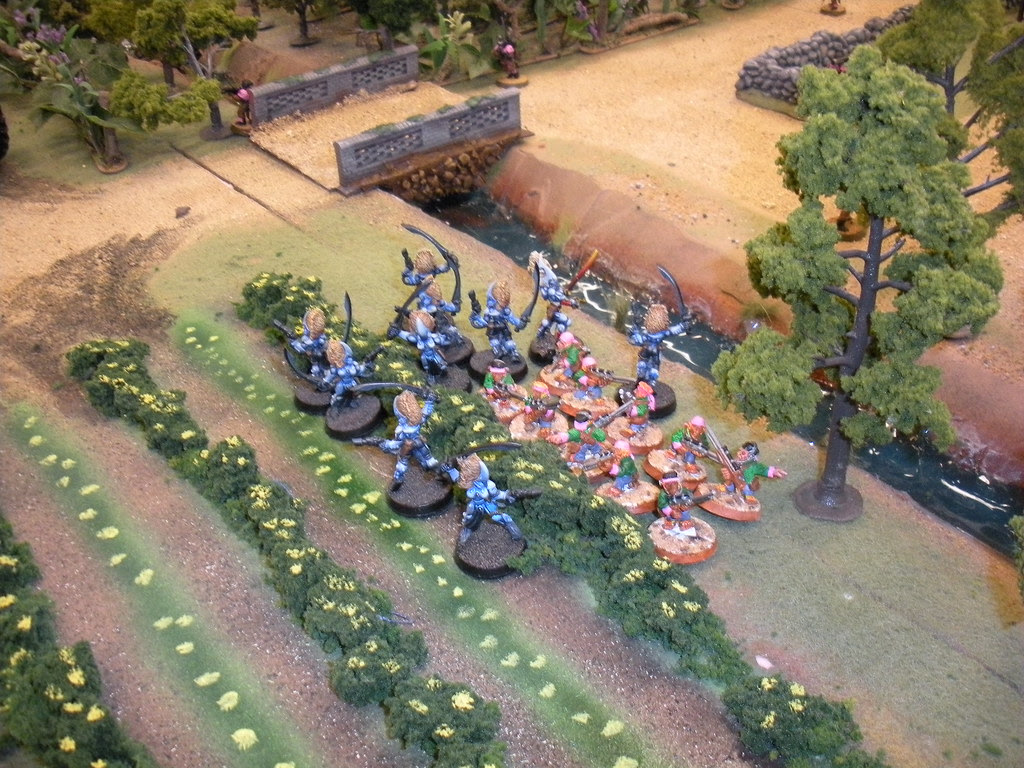 The snipers fell to their blades too quickly for the alarm to be raised, so the warrior women splashed across the stream and into the northwest quarter. 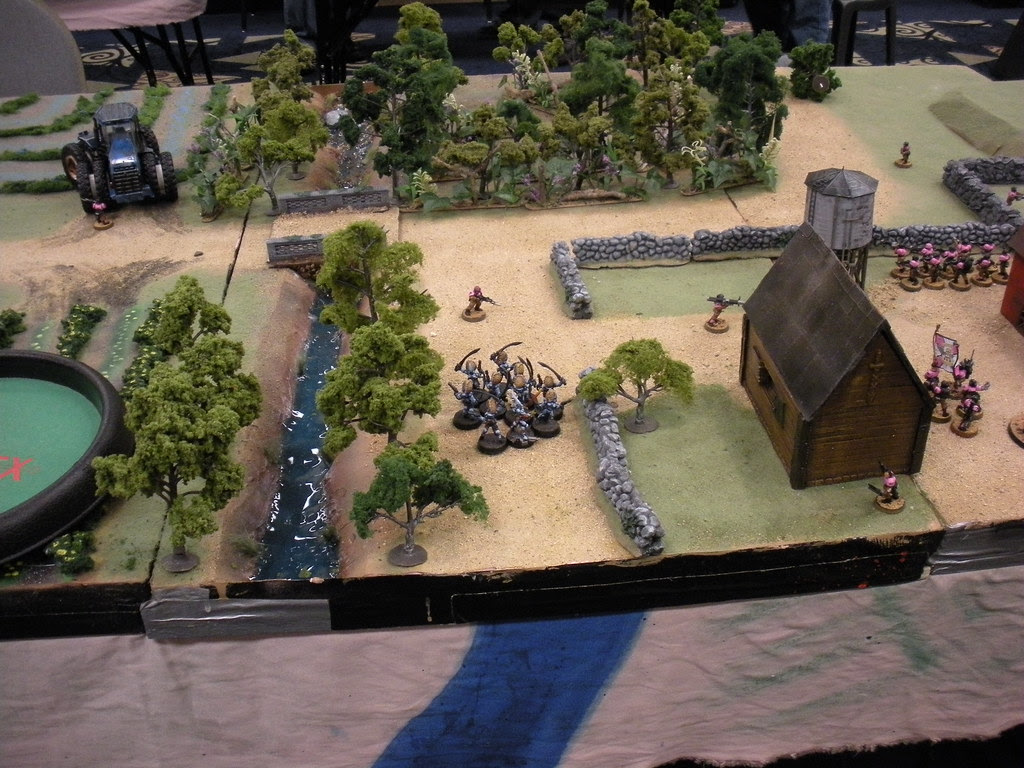 The Howling Banshees followed up their initial success by silently murdering an entire command squad: 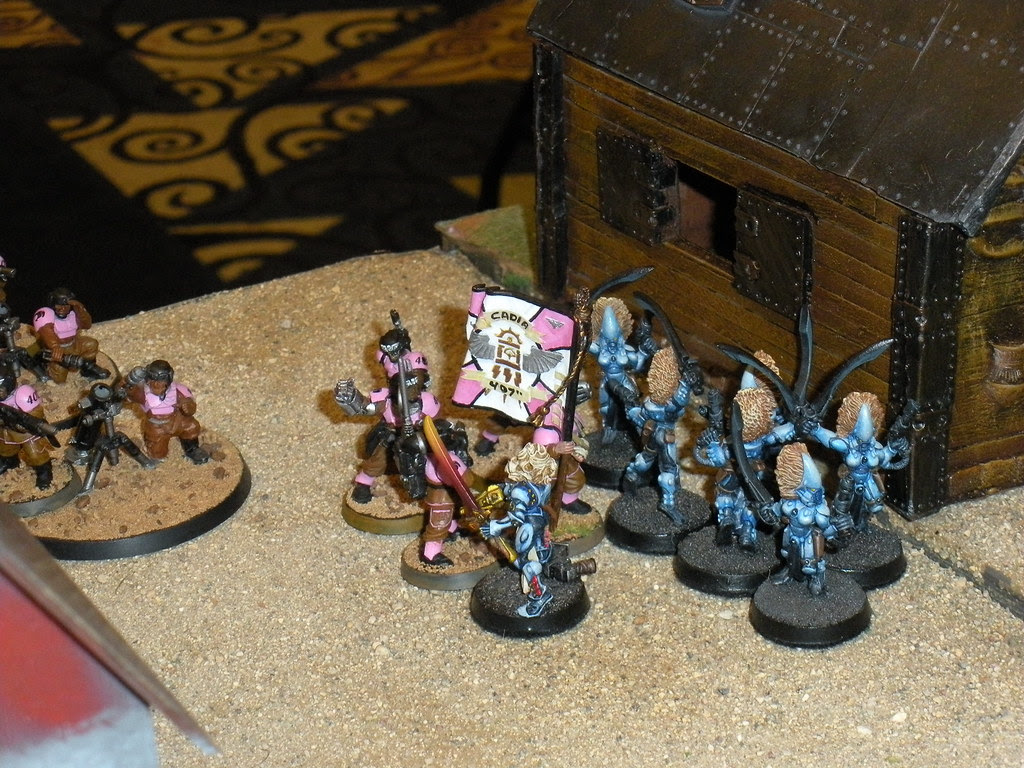 However, the Avengers ran afoul of some sentries in the woods, so the alarm was finally raised... 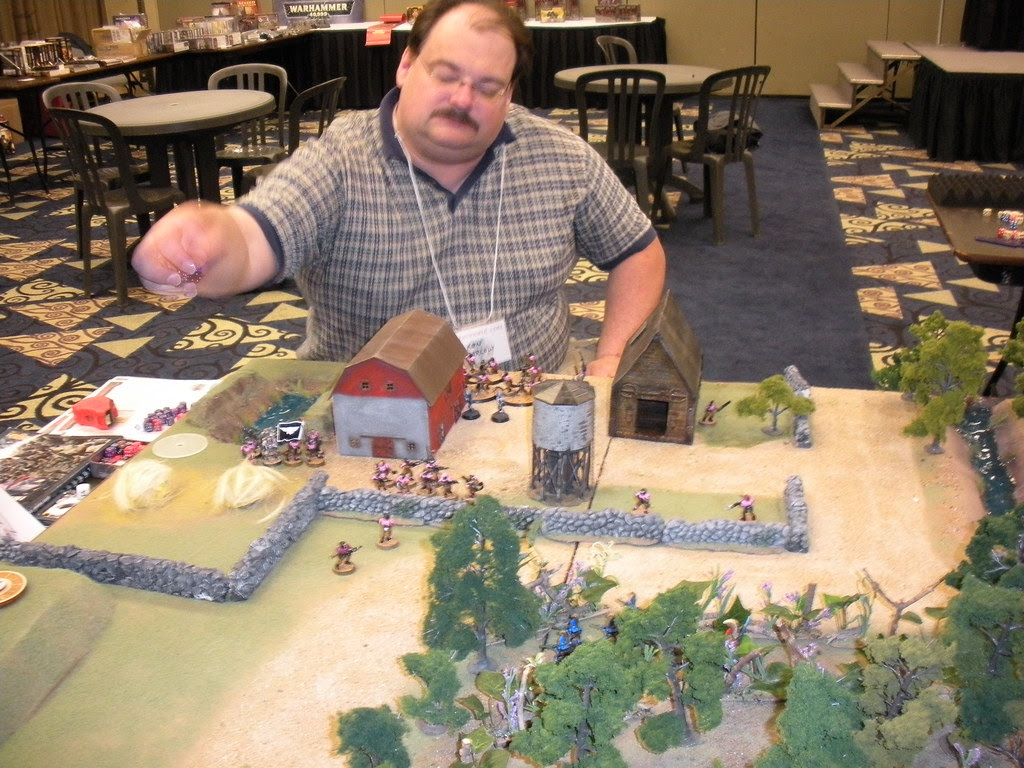 The IG squads within the compound were called to arms and took up firing positions. After the order "First Rank...Fire! Second rank...Fire!" rang out, half the Banshees fell to lasgun shots. Ken's mortars opened up at point blank range, only killing some of the Guardsmen of the firing sqaud. The Banshees passed their morale. The 6 stands of mortars were right close by, so next turn the Banshees charged into both squads, to tie them up and keep them from firing. 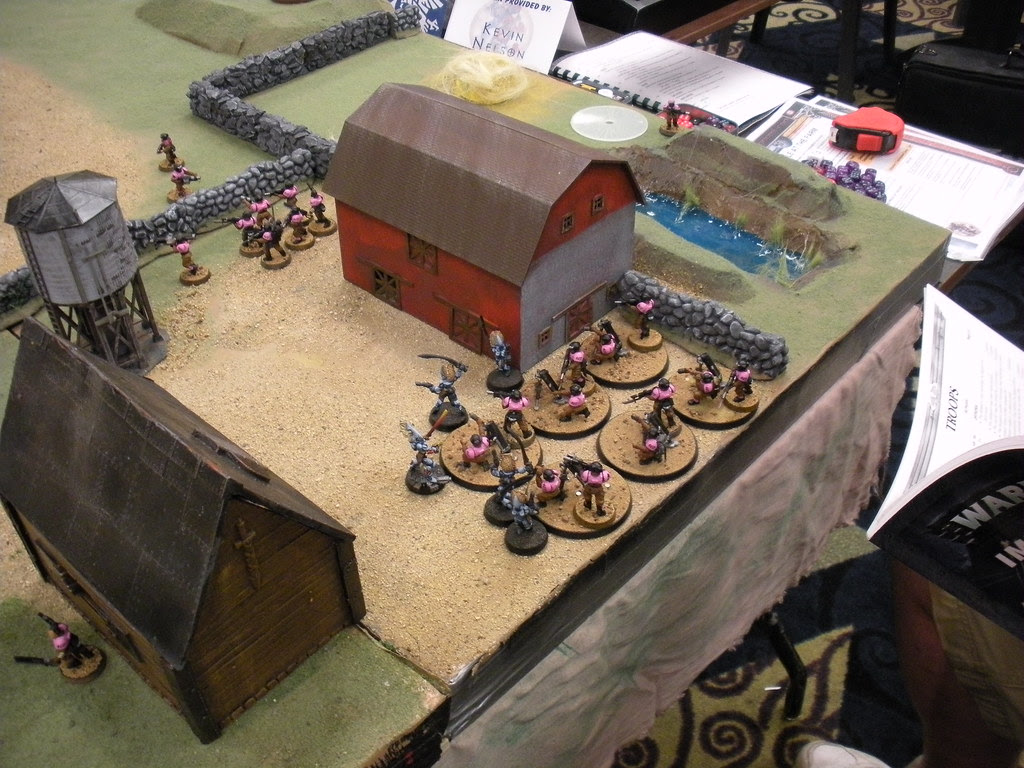 The game proceeded at a breakneck pace as both sides tried to bring on their reserves, any reserves. By the rules of the scenario, reserves came on randomly from either your own board edge or either short table edge.

The Guard were able to bring on the Hellhound and the Russ just to the east of the farmhouse. Their combined fire wiped out the Avengers already on the table. Served them right for making so much noise!

The Banshee Serpent and the Farseer followed a Chimera full of infantry from the eastern edge, and were in turn followed by the Psyker squad in their Chimera. The Psykers declined to cast powers, in the face of the Farseer's Runes of Warding. However, she was put out of action by combined small arms fire from the Chimeras open hatches.

Meanwhile to the Southwest, the other mounted Avenger squad, the Fire Prism and the Autarch made it onto the board. 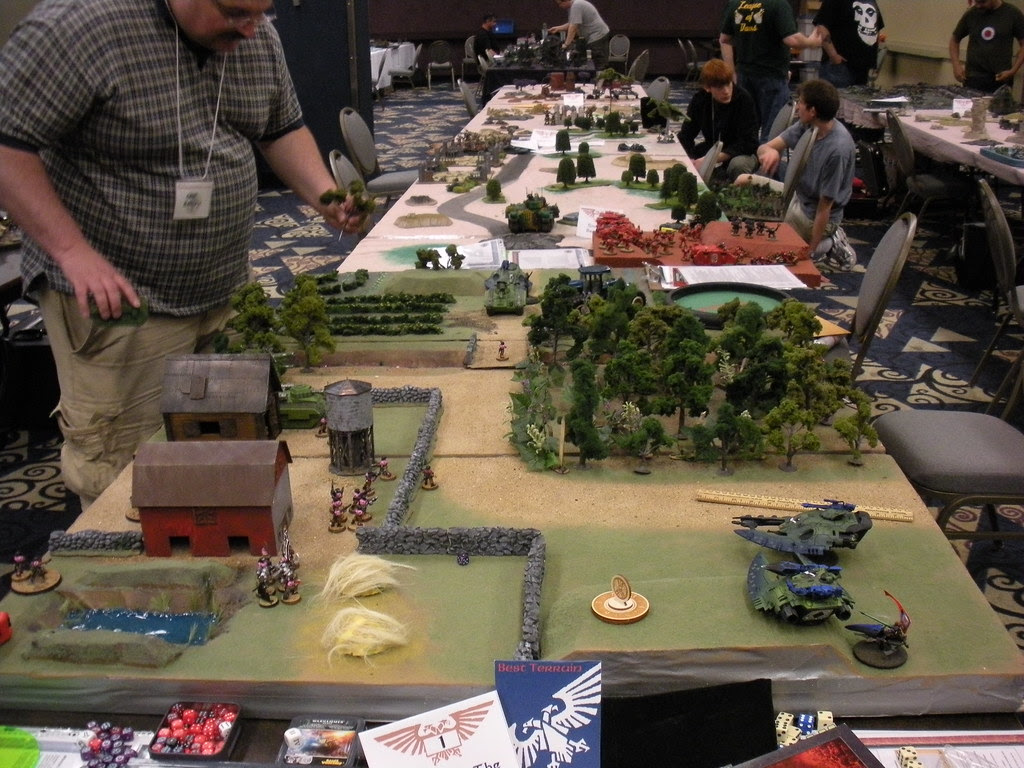 A solid hit from (IIRC) a plasma gun stunned the Prism so it couldn't move. The Banshees had by this time killed 5 of the 6 mortar stands, but had finally fallen in close combat with the IG named character and his retinue.

The clock was winding down for lunch. As a last desperate move, I boosted the Avengers and the Autarch into the northwest table quarter, and rammed the Hellhound with the Banshee's serpent, Fencing Master, damaging the flame tank and costing it half its value (the Serpent didn't have enough movement to actually get into the table quarter). However, as the 5th and final turn wound down and the game ended, it was too little, too late. The remaining Eldar reserves didn't have enough movement, and the Imperial Forces just had way more tanks and infantry on the ground in the farm's table quarter.

The game was very cinematic. Ken and I waited with baited breath the outcome of each die roll to raise the alarm. The MVP of the match were clearly Exarch Rhapsody and her Howling Banshees, who must have run over 6 feet on the table during the course of the game, gaining contact several times to use their swords. In the end, the Banshees were undone by their brother Aspects of the Dire Avenger Temple.

Fortunately, this was my sole loss for the entire weekend....

Click here for the next game.
Posted by DaveV at 5:57 AM