OVERVIEW
All day, the sun baked down like a hammer on your heads. Now, quiet night breezes cool the hot sands. Enemy forces face off against each other, the cool air fighting the ground's scorching heat. They ready their weapons and close to optimum combat range. As they engage, a rumbling shakes the earth and something rises from below…

As circumstance would have it, the next two scenarios I played were ones I played at the Astro-mini-con about a month ago. Somewhat surprising, since there were so many other tables and scenarios available.

Potentially, a tough nut to crack. Lots of Necrons to help prevent phase out, lots of mobility with 10 things on a destroyer (that is, jetbike) chassis.

Victory points would decide the winner. Night fighting was active the whole game, negating much of the Necron long range fire. Ambull monstrous creatures randomly burrowed out of the ground 6D6 inches from the centre of the table.

The table itself was fairly open, with scattered wreckage and a large hill in the western half of the table. This hill was high enough to shield skimmers...

I won the roll, so elected to go second.

Dustin set up first in a long line from west to east. The Immmortals were in the northwest table quarter, with the Destroyers close by. The Heavy Destroyers and the Lord anchored the line on the eastern flank. 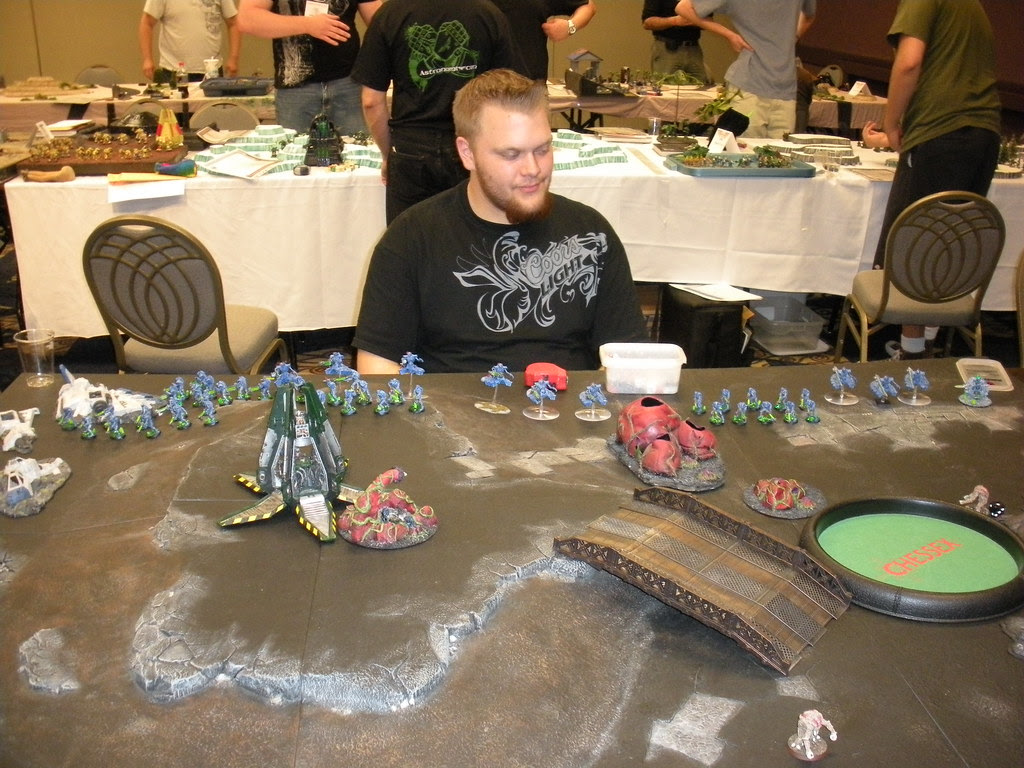 I kept everything in reserve, the two HQ's together as an ersatz unit, and not deep striking the Spiders. That would be two turns less shooting at the Eldar, and two turns for any Ambulls to kick the Necrons around.

The first turn and the top of the second turn went pretty much as I expected. The Necrons didn't move much, just enough to get good shots on any rogue Ambulls, killing them with entire squads firing.

The Autarch's used his reserves bonus to help bring on, respectively, the Prism, the two Avenger squads, the Farseer and Autarch, and the Howling Banshees. They all occupied the southwest quarter. They were either out of LOS or covered by terrain from the long range fire of the eatern half of the Necron army. They were around 30" from the closest Necron models, so the Necrons would require very good night fighting rolls to see them. This positioning would also put them almost out of reach of the Lord and the Heavy Destroyers, who would require at least a couple of turns just to get close to the action. Vechicle shuriken cannons wiped out any Ambulls in the Eldar vicinity. 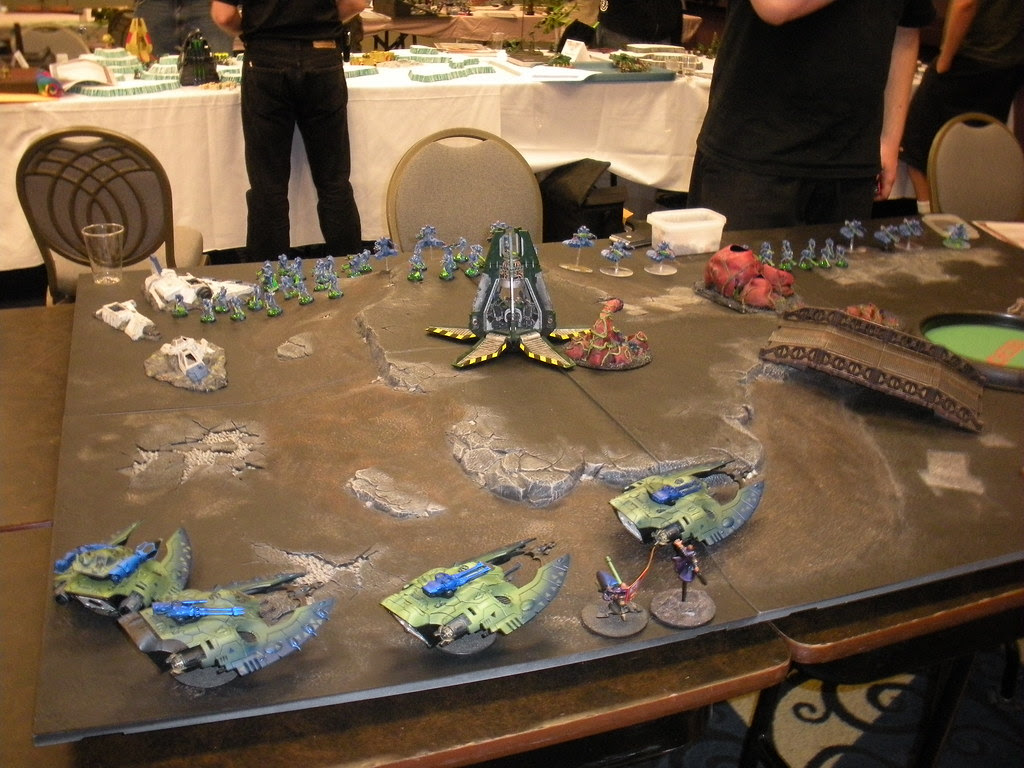 An Ambull appeared just in the middle of the northern board edge, and the nearby Warriors failed to drop it. Necrons moved both Destroyer squads forward. As it turned out, the Necrons couldn't see far enough in the murky darkness to pinpoint their elusive foe.

The Swordwind received the last of their reserves. The Spiders moved on from the south edge, anchoring the Eldar right flank. They were in a good position to be shielded from fire, yet able to respond to the looming Destroyer threat. The Fire Dragon Serpent moved on less than 12", in a position also to respond to the threat.

The Howling Banshee Serpent moved flat out north, capstoning the following Avenger Serpents. Even if their ride was brought down then, the Banshees could disembark possibly in charge distance of the Immortals or some Warriors next turn. The Fire Prism moved up at combat speed, under 12" movement, so as to stay just out of the 24" rapid fire and assault fire ranges of the Warriors and Immortals. The two Eldar HQ's split up, following the vehicles. A smattering of Shuriken Cannon fire managed to bring down one Destroyer. 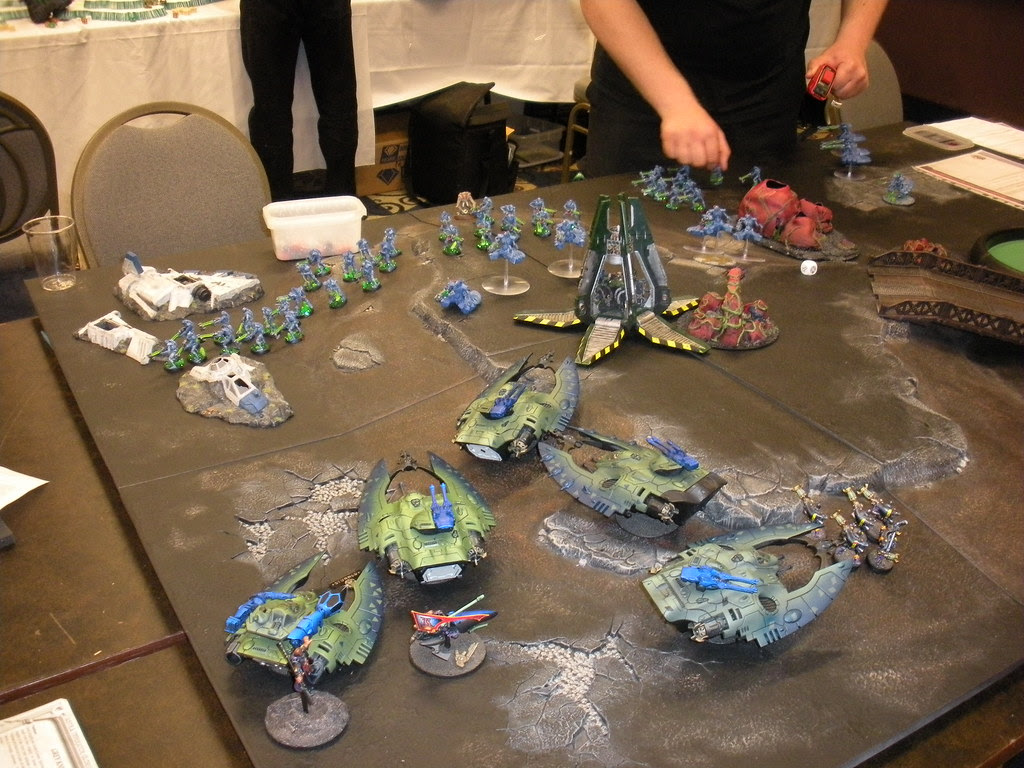 Next turn, the Ambulls achieved nothing.

The downed Destroyer got back up. Dustin had played his movement well, keeping the destroyers within 6" of each other. The Necrons killed off all the current Ambulls, again. There would be more. The Immortals moved south. Necron spotting and shooting were both very poor, killing a Warp Spider. When the dice leave you, they leave you.

For the top of the Eldar player turn, the Farseer failed her psychic test for Doom. Sigh.

The Banshees disembarked and moved towards the Immortals. Their Serpent moved off to the southeast to shield that flank from enemy Destroyers. There was a general advance as the Fire Dragons and both Avenger squads dismounted. The Autarch moved east to join the Dragons, to add his Fusion Gun to their firing on the Destroyers, and to absorb any charge.

The following photo looks south, taken from the Necron side of the table. 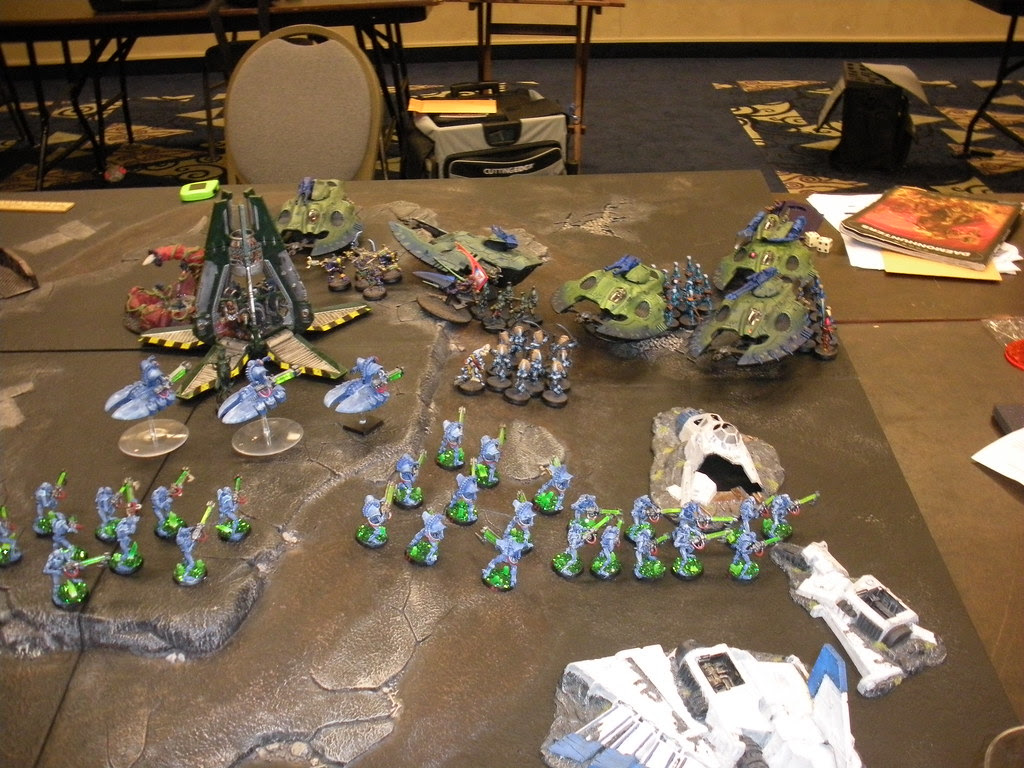 Fusion guns dropped all of one Destroyer squad, the ones just west and north of the drop pod. Shuriken Catapult fire from the Avengers dropped a few Warriors and Immortals. The Banshees then contacted both the Immortals and the westernmost Warriors, so as to not win this turn and to tie up both of them from firing. Some more Necrons died, at the cost of a Banshee. The Spiders used their second jump to interpose themselves between the Necrons and the Autarch/Dragons, offering themselves as both bait and shield.

Two of the three downed Destroyers got back up again, and joined their fellows, leaving a unit of 5 Destroyers. Dustin's Necrons started moving west, to try and get into the action. Necron firepower killed another Ambull, and killed 3 of the last 4 Warp Spiders; the remaining Spider's morale held. Potential Exarch material, that one! A couple more Warriors died in close combat, and another Banshee, but the Necron's morale held up. This was a good result, that set up the next and, as it turned out, final Eldar player turn.

Doom was successfully cast upon the Immortals. The westernmost Avengers, who were now out of ammo, moved north to help out the Banshees. Everything else except the Prism and Farseer moved east, to deal with the Destroyer threat. The Autarch separated off, to be in charge position. The skimmers all moved at combat speed, so as to bring fire on the Destroyers and, potentially, the Lord and the Heavy Destroyers. The end of that final movement phase was captured in the following photo: 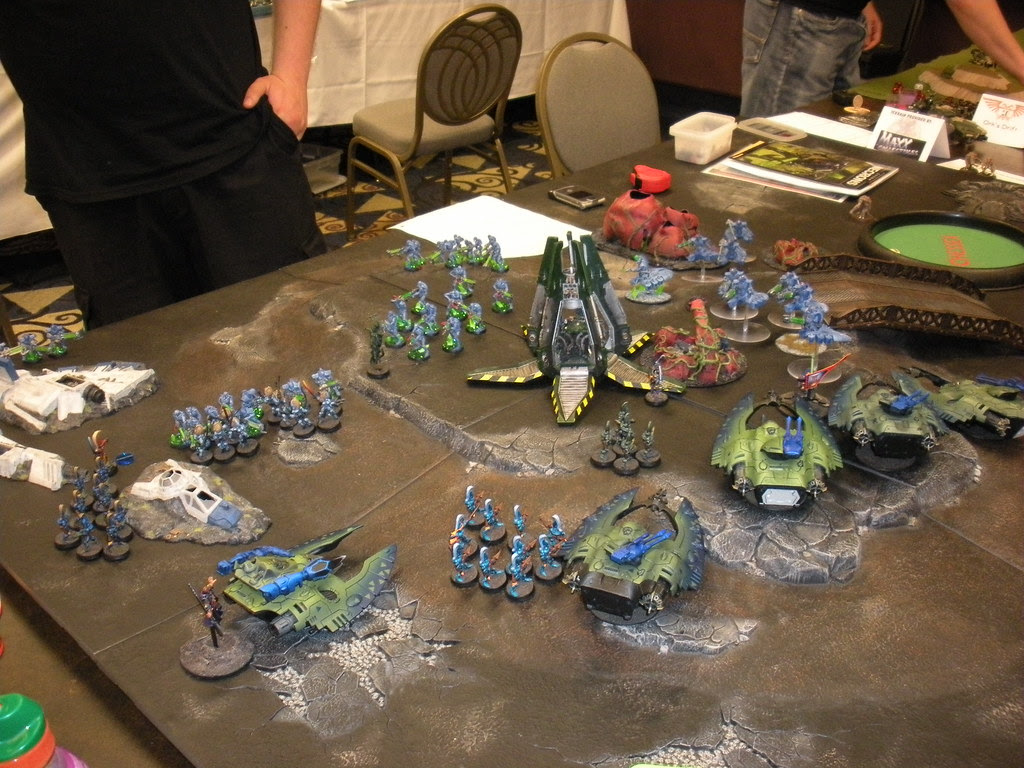 The Fire Prism failed to see anything in the murk and darkness. Shooting from the Dragons, Autarch, the other vehicles and the last Spider wiped out the Destroyer squad. The clock wound down and we completed the turn. The Dire Avengers ran well and the Avenger Exarch was able to contact the Immortals. Combined with Doom, the last of the Immortals went down to multiple power weapons. A couple of Warriors were left alive, but to no avail.

The Eldar received full VP's for the two Destroyer squads and the Immortal squad, and half points for the reduced Warrior squad. The Eldar in turn only gave up half the value of the Spider squad. The Eldar had scored well over 150 points more than the Necrons,for the win.

Click here for the next game.
Posted by DaveV at 6:59 AM