In between bouts of venting on my 40k flyer project, I am also working on some 25mm Napoleonic Austrians for Curt C in Regina. I thought I would post some progress shots, just so he knows I'm working on 'em! He intends to use them for a special project, but that's all I will say. I'll leave to him to provide more info if he would like - but we all know what kind of amazing stuff he can set his mind to!

The figures are from Wargames Foundry. I believe the Perry brothers sculpted them for Foundry, but I don't know for certain. 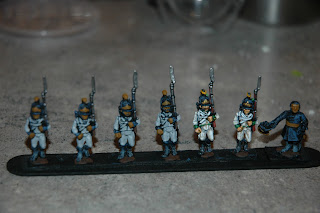 I thought I would try and do one of those cool "progression" entries for the blog, but I screwed up by doing the same step on all of the infantry, so I just finished two (second and third from the right above), and moved the others to about 50% finished. The officer on the left is only about 10% finished.

Curt has asked for the troops to represent a particular Austrian Regiment - a "German" unit, I believe it was IR 47. I may be wrong about the Regimental number, but the facings are a green colour. 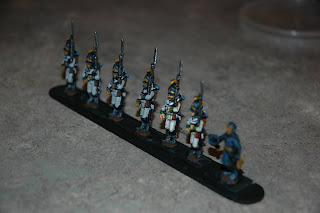 I am mounting these at about four or five per popsicle stick, and moving through them a "stick" at a time. 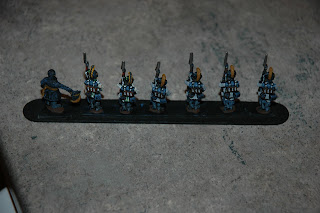 The target is to have at least 36 (including some officers) done by mid-summer. I look forward to dispatching these lads for service in Regina!
Posted by Greg B at 9:36 PM