OVERVIEW
You have been sent to recover vital supplies dropped by friendly forces. Lost are 6 crates containing valuable supplies. A word of caution, these crates may have been damaged in the drop but you’ll only be able to tell once you open them.

A new day and a new set of opponents. First game that Sunday was against Jared's Space Marines:

The objective was to secure as many Supply Crates as possible and hold them at the end of the game. The objectives could be picked up by any model with a hand, and could be placed inside transport vehicles. They would be dropped if the model carrying it was killed, or its squad was involved in a close combat or was broken. The crates were fragile, so at the end of the game you had to roll a die for each crate - on a "1" they were worthless!

The entire table was snow covered, counting as Difficult Terrain except for skimmers and jetbikes. There were forests scattered about. There were also several hills, whose flat tops we ruled were good going.

Both sides placed the Supply Crates before setup. The first three crates were roughly midpoint in depth on the table, spread evenly from west to east. I placed another as close as I could to the center crate, to draw the Marines toward the centre. If a single sqaud went after both, I figured I could take those away from them if I concentrated the Eldar forces. The last two creates ended up near opposite deployment zones, in the eastern third of the table.

I lost the roll so Jared went second. We were required to set up at least one Troops unit, and could set up all our Troops. I placed one Dire Avenger sqaud in their Serpent behind a large hill, in the centre of my 12" deployment zone. The other Dire Avenger sqaud was placed in the southeast table quarter, behind some woods, hoping to make a play for a prize just 13" from the long edge. Jared set up his two Tactical Squads in the west and east. As I thought, he infiltrated the Scout Squad in the centre, to grab the two prizes located there in a woods.

Due to scenario special rules, we got to roll for reserves on the first turn, needing a "5" to bring stuff on. The Swordwind needed bodies on the table, so the Autarch used his +1 for Reserves rolls. The Farseer, Autarch, Banshees and Dragons all showed up. The Companions, located to the east, moved at combat speed and disembarked right on a Supply Crate, seizing it. The Farseer and Autarch hid behind the central hill with the other Dires. The Banshees moved flat out to be in a position to threaten the centre crates next turn. The Dragons moved flat out to the east, to threaten that flank and possibly seize another crate next turn. 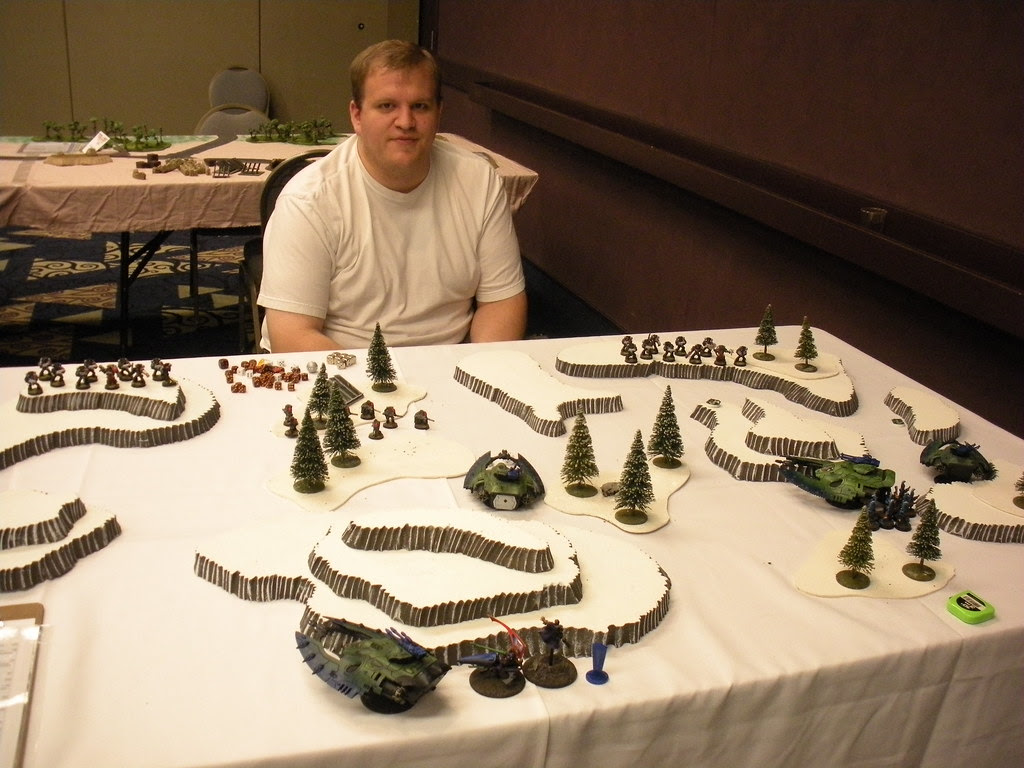 Jared is a bold player. He tried to drop his Dreadnought right behind the dismounted Dire Avengers. He could have both roasted the infantry with flame and had the pod shoot up the Dragon's Serpent! 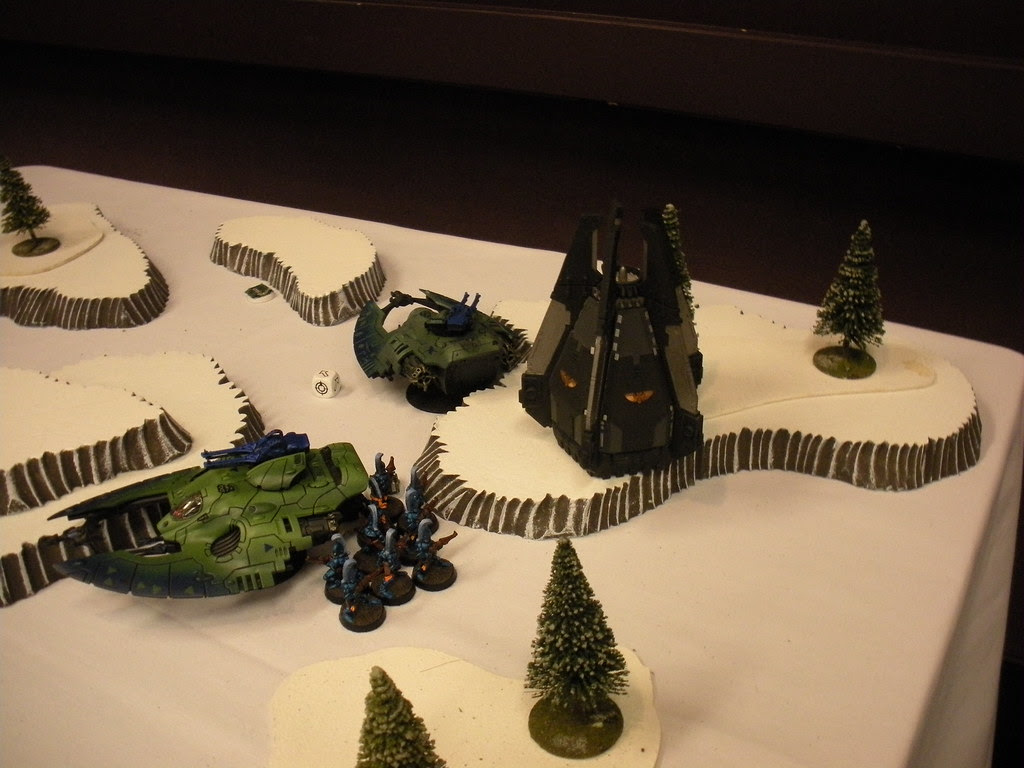 (ETA) Fortunately, he deviated right off the table. Rolling on the mishap table, the dread went back into reserves. 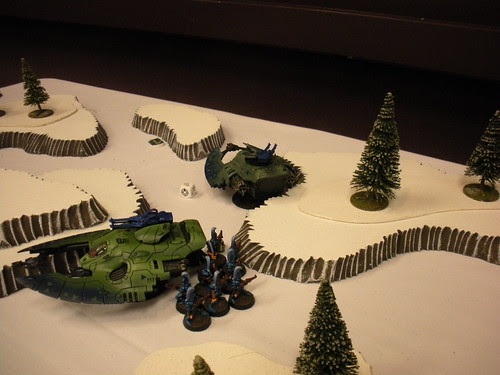 The Assault Squad showed up, moving on the ground so as to not incur Dangerous Terrain tests. Meanwhile, Jared started the Tacticals and the Scouts slogging through the deep snow.

The Fire Prism and the Warp Spiders showed up and moved up the eastern flank. The Dragons moved north and dismounted to seize another crate. The Avengers mounted up, putting the crate under tank armour. The other Avengers and the HQs moved north and east. The Banshees moved east in a feint. It looked like the Swordwind would do its usual "shift the axis of attack" to the east. 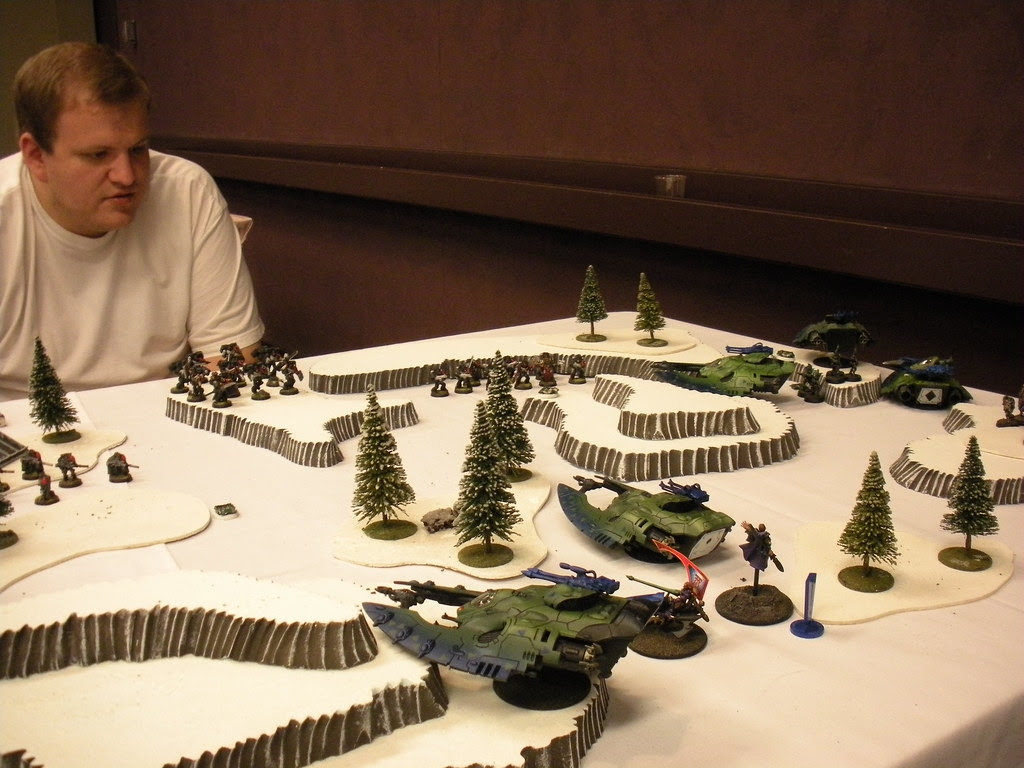 In the Imperial turn, the Command Rhino moved onto the table. The Vindicator moved on in the northeast corner. The Dread stayed in orbit. The Tacticals to the west moved up to the crate located there. I would have to ignore that crate from now on and concentrate on the ones in reach. The Assault Squad moved up onto the relative safe terrain of a hill. To the east, the surviving Tacticals moved towards the Eldar, by-passing a crate. Good move. They would provide a buffer from behind which the Assault Squad could operate. The Scouts moved onto both crates in the centre of the table. 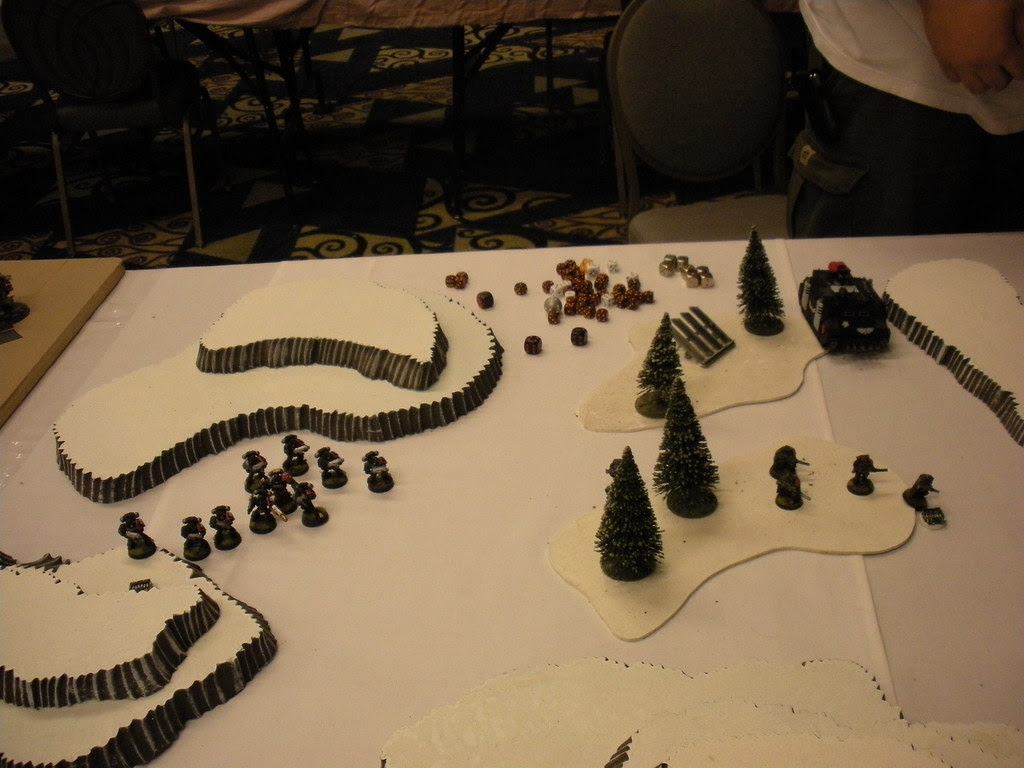 The Farseer Doomed the Scouts. The Dragons mounted up. The Fire Prism and the two Wave Serpents with prizes inside them moved west and south, away from the Vindicator - that Imperial tank did nothing else of note all game. The Spiders jumped in open order behind the vehicles, to prevent the Dread from landing there and popping skimmers from the rear. The Spiders lost one squaddie to the difficult terrain.

In the centre, the Banshees and the other Avengers moved up and dismounted, to bring the Scouts under fire. The Autarch and Farseer moved up in support. 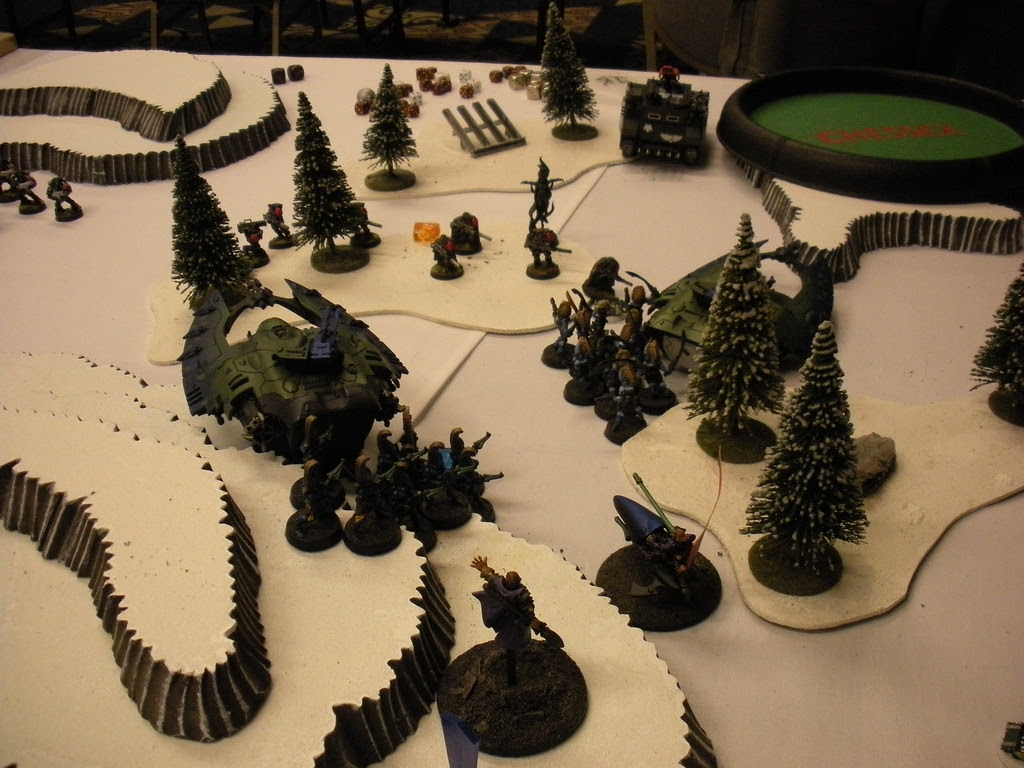 The Dire Avengers unleashed a Bladestorm, two skimmers fired, and even the Banshees fired their pistols, all this shooting was directed at the Scout Squad. Their fate was sealed. 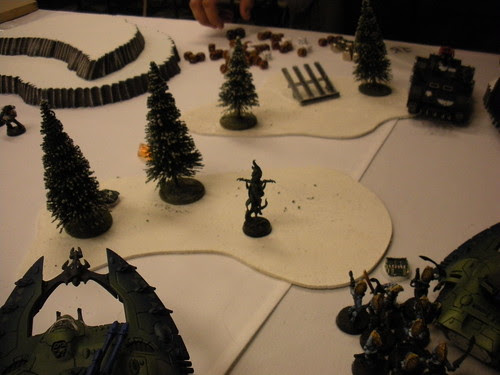 Vehicle fire, including a focused Prism shot, killed six Assault Marines. They were Jared's most mobile unit, save for the deep striking Dreadnought, so they had to be whittled down. At the bottom of the turn the Autarch and the Farseer slid east to help shield the rears of the first Avenger Serpent. 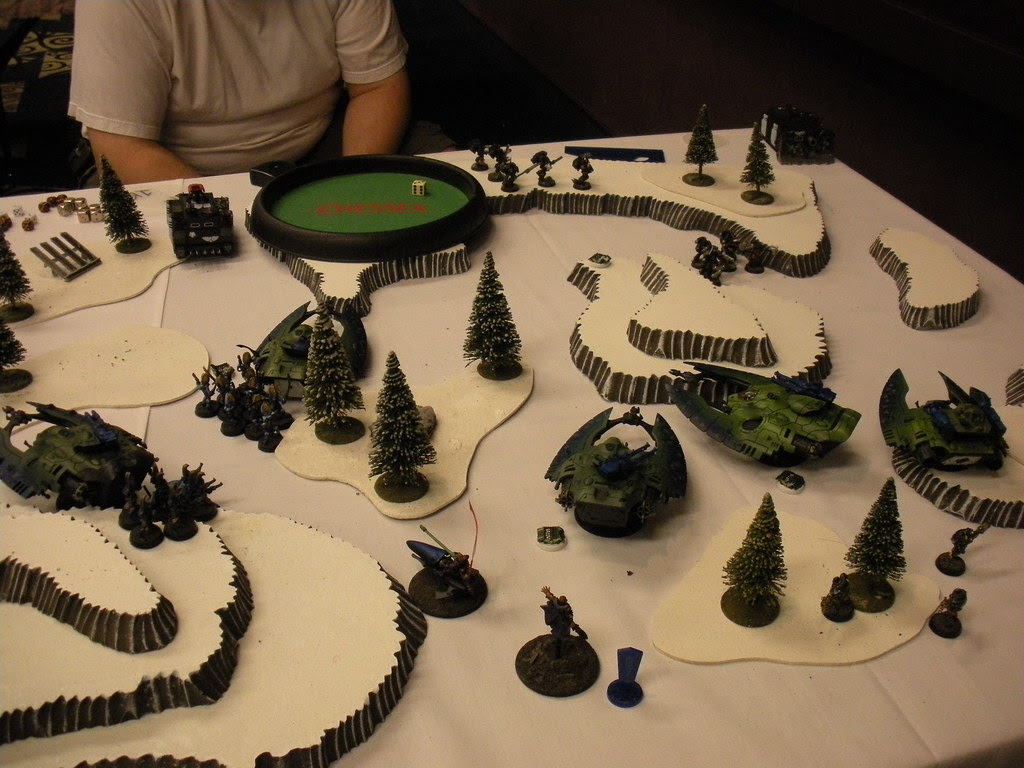 The demise of the Scouts left a drop zone in front of the dismounted Avengers and Banshees. Jared dropped the Dreadnought in another bold move, and this time it stuck! 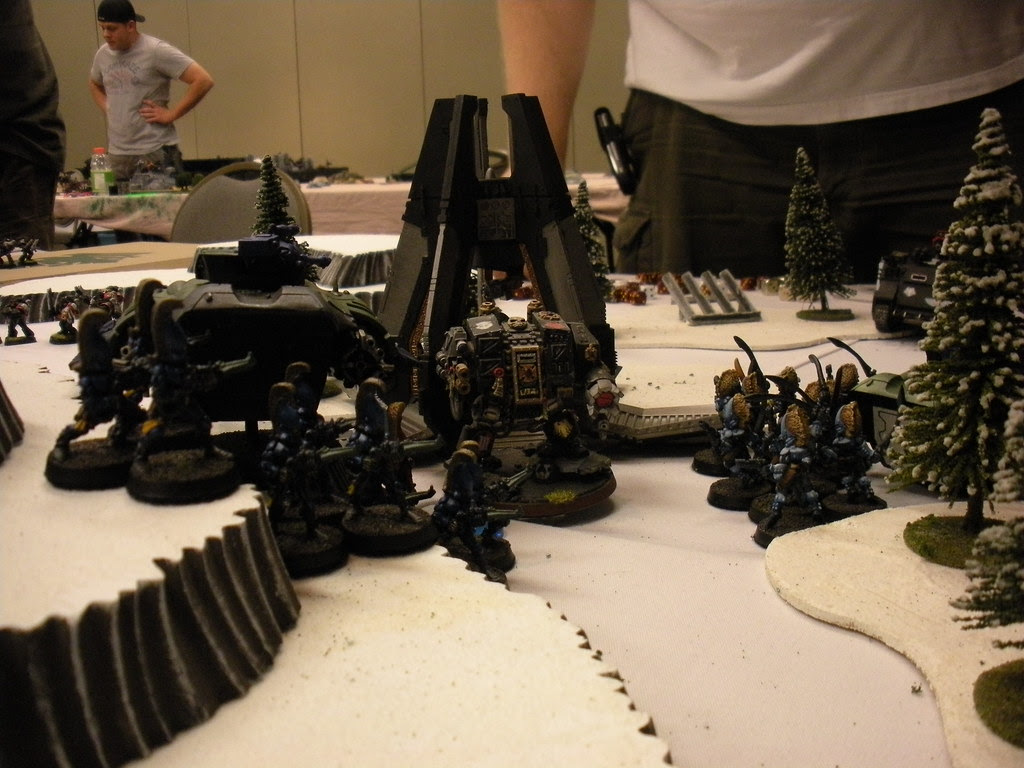 The Rhino mounted Command Squad managed to plow through the snow and dismount in front of the Banshees. The Tacticals to the east moved back west and seized a Supply Crate. The Assault Squad moved up onto a hill to the west. The westernmost Tactical Squad starting slogging east. After the shooting phase was over, the Banshees were all gone, and their transport was wrecked. 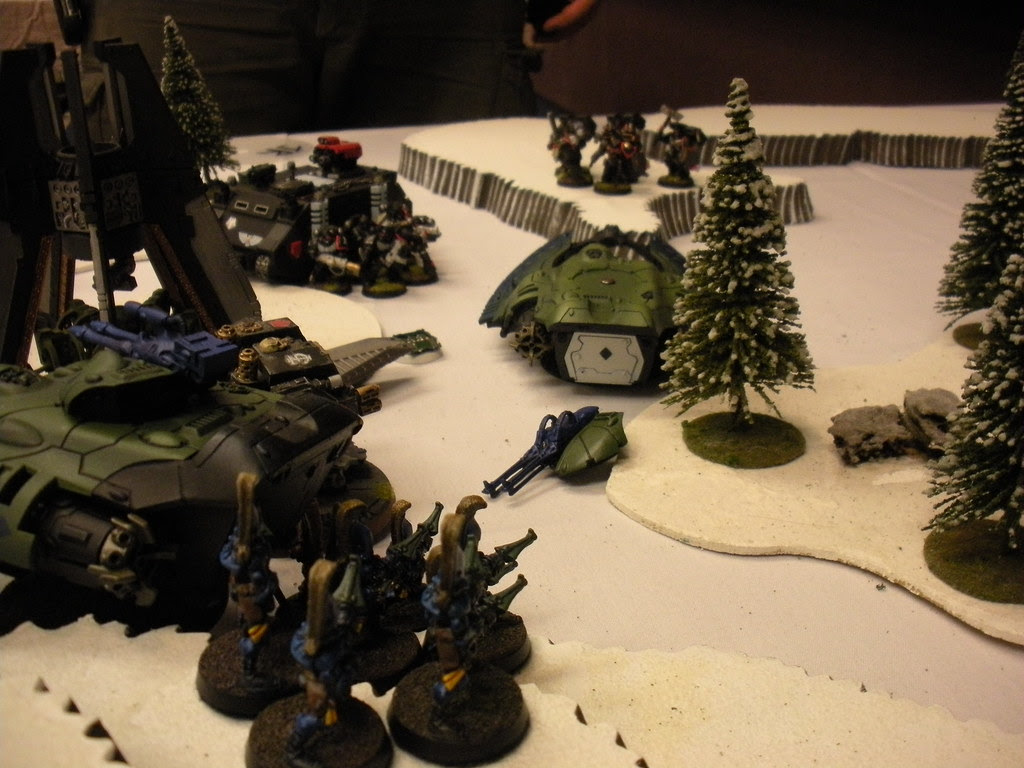 Time in the game was running out; it was lunch time. Last turn!

The Farseer Doomed the Tactical Squad to the east. She and the Autarch moved towards the Dreadnought, hoping to take it out. Under the rules of the scenario, the crates could remain inside a vehicle without any passengers. The Companions and Fate's Tears dismounted, to bring fire upon the Tacticals. Their respective Wave Serpents and the potatoes inside moved south, away from the action and the reach of the Assault Squad and the Vindicator. The Spiders jumped north, losing another to a Dangerous Terrain test.

The Blood Redeemer's Wave Serpent moved west skimming past a crate, making its Dangerous Terrain test as it stopped over the western edge of the forest there. The Tacticals would have to move around the Serpent to reach the Supply Crate, which would take at least two turns of movement. No on else was close enough either. 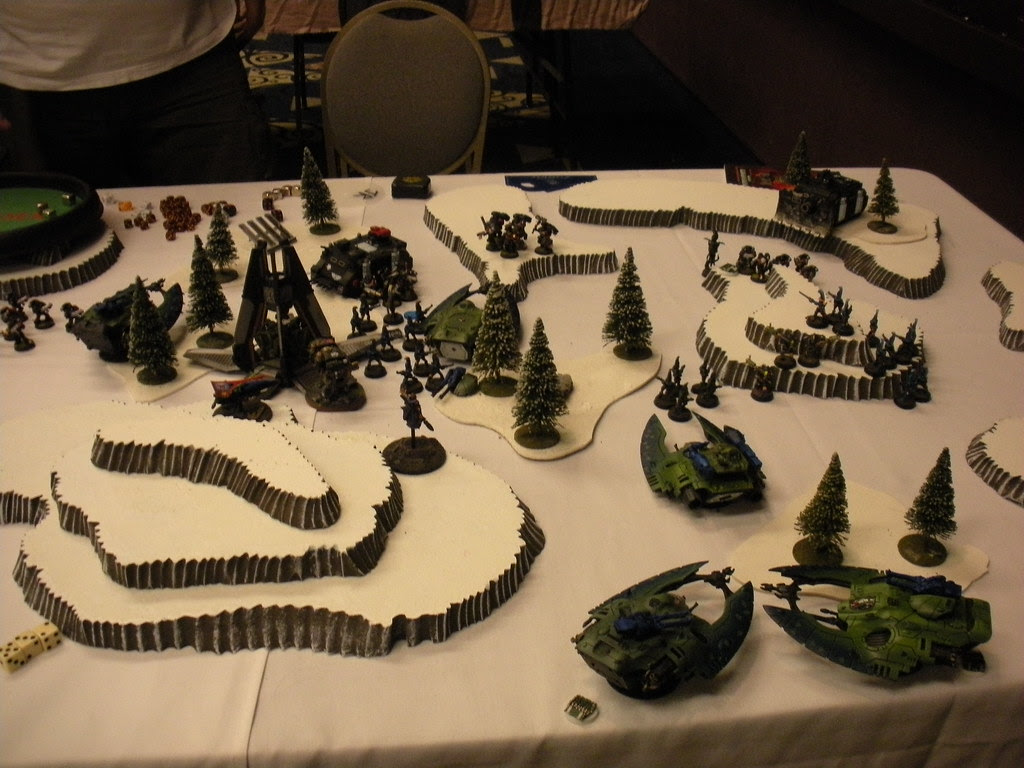 In the shooting phase, the Autarch managed to immobilize the Dreadnought.

The Blood Redeemers couldn't reach a crate in the centre in the movement phase, the only phase in which you could pick up a crate. However, with a good run roll they were able to surround the crate. The Space Marines would be unable to pick up the crate in their next movement phase, having to concentrate on killing the Avengers. 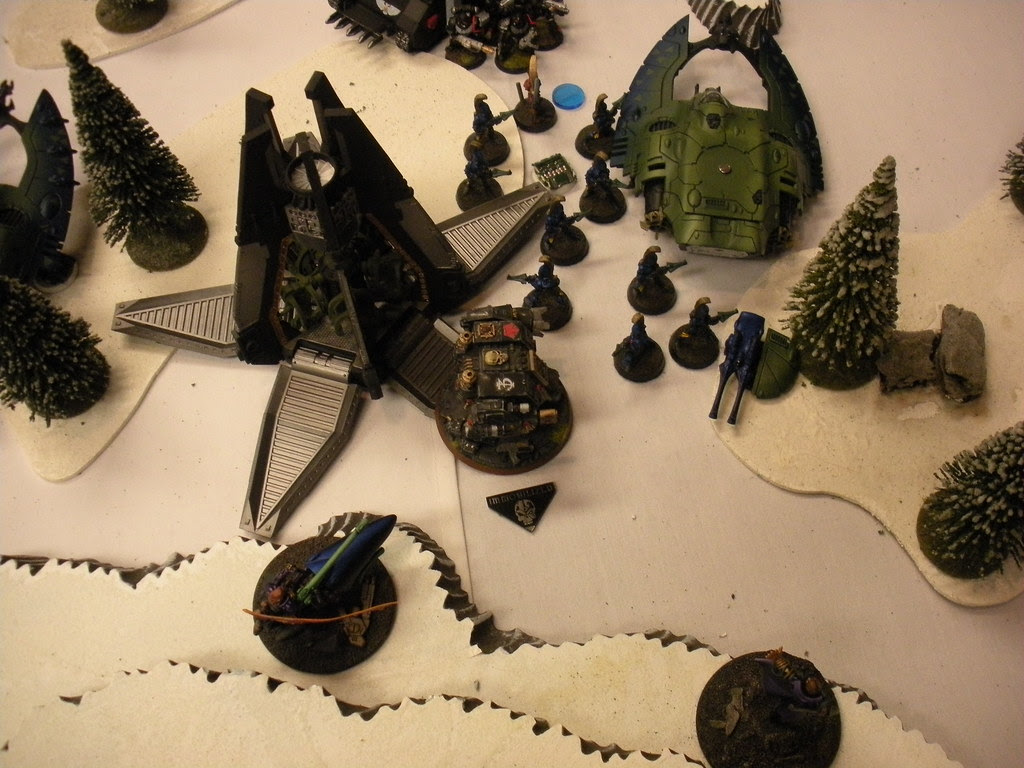 Concentrated fire wiped out the Tactical Squad. The Swordwind had two crates to the Marines' one. The Eldar were in the lead again in the Supply Crate race. 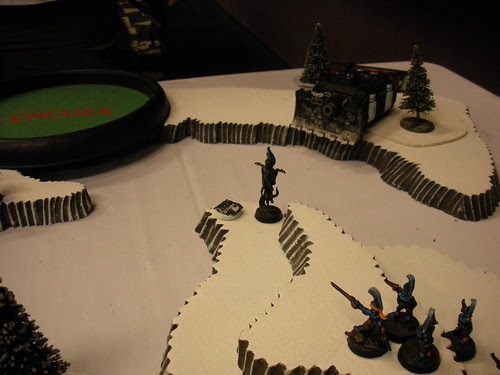 Jared moved boldly again! The Rhino APC tank-shocked the Dire Avengers away from the Supply Crate they were shielding. The Captain separated off and jumped onto that crate. The Assault Squad jumped onto the abandoned crate to the east, picking it up. The Marines were in the lead again!

However, two of the Assault Marines had landed in the deep snow. Rolling for Dangerous Terrain, they both died. That forced a leadership test, which they then failed. The Assault Marines fell back, dropping their crate in the process. 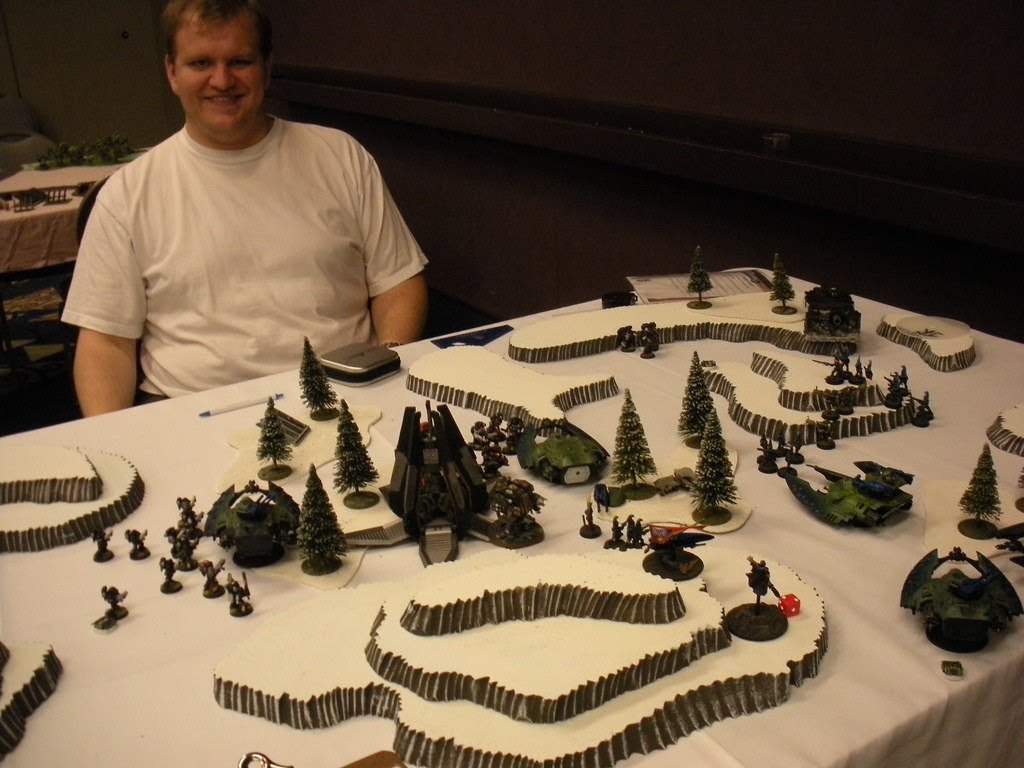 We rolled for the two crates we each had, and they were all still viable. The Space Marines and the Eldar each held two Supply Crates.

The Farseer sheepishly admitted that she had not foreseen any of this.

Click here for the next game.
Posted by DaveV at 7:03 AM

Whew, you got lucky with his Assault Marines eating it like that.

Also, if you happen to see Jared again, have him look up the rule "Inertial Guidance System" for his Drop Pods. In short, Pods never roll on the Mishap table; they just reduce the amount of deviation enough to avoid the obstacle. That might have made a notable difference in your game...

Thanks for the great reports!

Thanks for that! I actually haven't read the Space Marines Codex.

Losing the Dragons or the Avengers would've certainly cost the Eldar a supply crate, but may have allowed the Banshees and/or their HQs to seize the crates dropped by the Scouts...

Definitely a stroke of bad luck, my Assault Marines. That one morale test was the difference between a win and a hard fought draw!

Dave's got it mostly right, but a few details got kinda muddled:

First, you're right - IGS would have stopped the Pod, but the Dread in fact dropped sideways clean off the table, not onto the tank! Bit of a nervous moment, that mishap roll...

Aside from that, the command squad was in fact a melta-heavy block of Sternguard.

And you know... I'm still a little stunned that the last minute tank shock from the Razorback actually worked! It was pretty much my last ditch, hail mary effort, and had it not worked, the Captain would have had to stick with the squad, made the risky jump, and hopefully held it together with his boosted leadership!

Thank you for clearing that up. I remembered the roll on the mishap table better than the actual deviation!

I have made the appropriate changes to the batrep, and marked the edits ("ETA") for clarity.