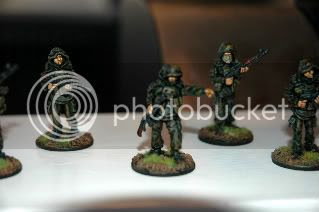 Sometime in 2008, Dallas picked up a collection of 40mm Russians & Chechens which I believe were sculpted by "Honourable Lead Boiler Suit Company" - see this link.

They are pretty expensive, but Dallas, if I recall correctly, picked them up for a song in yet another sharp-eyed trade. I think he has like thirty or forty of them. Since I already do modern in 3mm, 6mm and 28mm, why not 40mm? Dallas was kind enough to part with 5 of the models, and I'm pretty sure this is supposed to represent a Spetznaz fire team.

I sat down to do some research on the uniforms, and then quit almost immediately, as I just have no attention span for that. I checked a bunch of photos from both the Chechen war, and the more recent conflict and Georgia, and it seems that the troops wear whatever is handy, based on an OD camo-pattern, with some black and brown. The Russian military establishment is hardly what it once was, so I doubt there are commissars doing inspections for uniform regs, especially for special forces soldiers. So I went with that, and tried to give them each a little Russian flag patch on their left sleeves.

Overall, they are neat looking figures, but I think the sculpting leaves a bit to be desired (not that I am any kind of sculptor, but still). The hands in particular suffer from a "platapus" syndrome of some kind, and really sucked, which is disappointing given the nice detail in other areas. Also, the previous owner of these figures had some kind of priming issue...there was a bit of a fine "fuzz" left behind by whatever he primed them black with, and this showed up in the dry-brushing efforts, but was mitigated by the wash I applied.

Here are links to other (yes, still blurry - sorry) photos....not sure why these are showing up as so #@$@ing enormous in the blog, so I'll try links for now.

Looking forward to a game with these fellows some time in 2009. Perhaps if I am lukcy, I can pry a few more away from Dallas.
Posted by Greg B at 3:12 PM