A couple weeks ago I ordered a whack of Pig Iron Kolony Militia from Brandon at Rattlehead Games. I was in the grip of "AT-43 Mania" at the time - I bought a Red Blok army for cheap cheap when Fantasy Flight had their infamous 70% off sale just before Christmas. However I didn't really like the look of the Red Blok infantry so I figured I'd pass on those, and proxy in some other models I liked better. (It's funny, I never would think for a minute of proxying other manufacturers' models in a W*rhammer or 40K army, but I don't have any qualms about in Rackham's game... go figure).

Anyway I hum'd and haw'd for awhile about what figures to get. It came down to a choice between Copplestone Neo-Sovs and Pig Iron Kolony Militia. I liked the Neo-Sovs for their drum-fed guns and retro-future look, but the Pig Iron stuff had its own brutish appeal too (for some reason I just love the look of gas masks on sci-fi figures). I elected to go with the Pig Iron Kolony Militia to stand in for Red Blok Spetsnaz and Dragonov Kommandos (i.e. the elite dudes). For now I can use my Eureka Soviet chemical troops for the Krasnye/RPG Soldaty units (i.e. grots). I may pick up some Neo-Sovs in future just because I love the look of them and their bulk fits a bit better with the Pig Iron lads than the Eureka figures do.

So! Here is the work from last night on the models. I've decided on a real Russian scheme. First thing I did was to file down the sides of the helmets slightly to smooth out the "coal scuttle" look and make the helmets look a bit more "Russian". The models required very little cleaning - all I needed to do was fit the separate heads, and base them on round GW slottabases (thanks Mike F. and Brian). I converted the NCO model to be a standard bearer. This was a bit tricky as it involved switching his pistol from his left to his right hand, and sculpting a new left hand holding the standard. We'll see how that turns out when it's painted ;-)

The colour scheme will be brown greatcoats with olive-green flak armor, tan pouches, grey masks and gloves, yellow-tan trousers, and black/steel weapons. The ammo-carrying robot (one of my favourite models in the range) will be olive green with some rust and wear.

Last night I but a base coat of dark brown craft paint on the models (couldn't find my GW Scorched Brown!) highlighted with GW Bestial Brown, and painted the green parts with a base coat of GW Catachan Green. Results are shown.

More updates as they get further along... 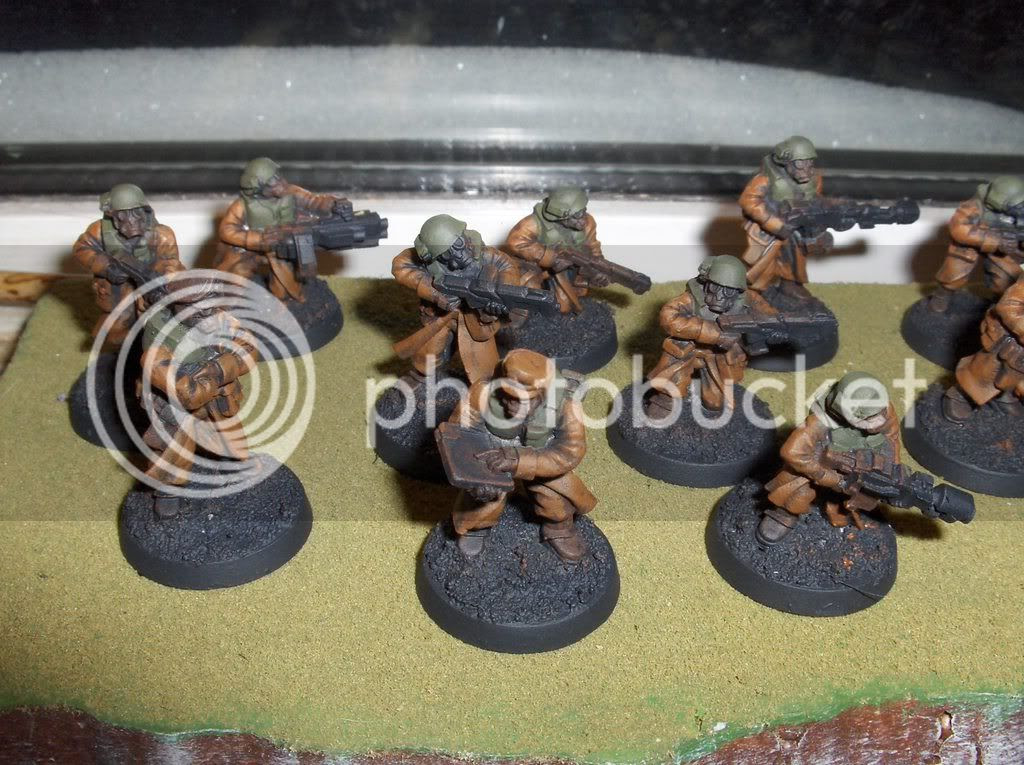 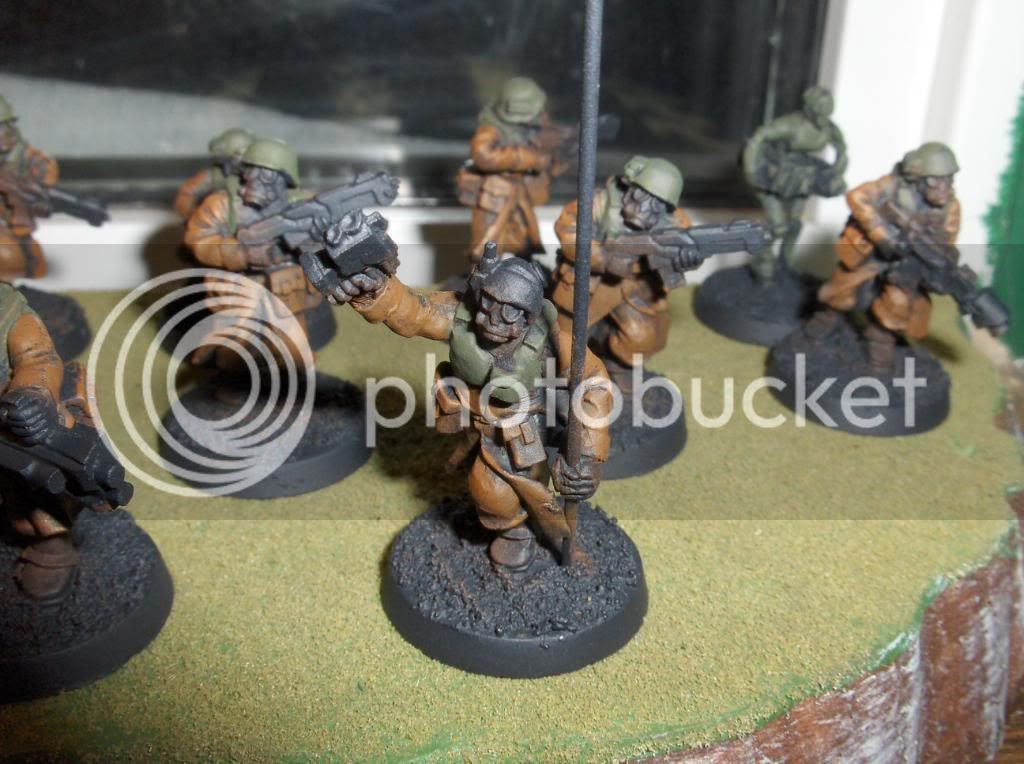 Dallas - I still think it would be a shame to use these lad strictly for AT-43! We need to do a "Space" version of your skirmish rules for some real rumbling...

Agreed! plus I just broke down and bought a few Copplestone Neo-Sovs as well...